December 1, 2012
It was once an activity that was outlawed for decades. Today, however, it's officially sanctioned, easily accessible, popular, and has gained a strong foothold in American culture. Just this week, a half billion dollar Powerball jackpot has been the stuff of everyday conversation, with people talking about what they would do with the money if they won.

The Associated Press reports that the holders of two tickets, which were sold at a convenience store in a suburb of Phoenix and a gas station in a small northwestern Missouri town, have won the enormous prize.

Amazing! It all seems to be such a bright, happy, and appealing picture. It's like a big beautiful rainbow with a huge lucky pot of gold at the end. But gambling in any form has two faces and it's the more sinister side that is rarely seen.

Lotteries falsely sell people the hope of riches, when the odds against winning are phenomenally large. In fact, the chances that one will be struck by lightning are 1 in 700,000. The probabilities someone will die from being mauled by a mountain lion are 1 in 32,000,000. The odds for winning a mega-million dollar lottery jackpot, however, are worse — 1 in 135,145,920. [1]

To think that government partners with the gambling enterprise to fleece its citizens in such a manner is nothing less than unconscionable. It's especially reprehensible when one considers that most of the people who purchase lottery tickets are those who can least afford it.

North Carolina has had a state-operated lottery since 2005 and according to a recent North Carolina Policy Watch investigation; the lottery has been doing the best when it comes to per capita sales, where poverty rates are the highest in the state. In poor counties like Lenoir, enough scratch off and lottery tickets were sold to account for $423.92 worth for every adult in the county during the 2009-10 fiscal year. Statewide, the report noted that the per capita sales number was $200.11 for every adult in the state. The analysis revealed that elevated per capita sales were concentrated in eastern North Carolina and climbed in counties with high populations living in conditions of poverty, defined as a family of four making less than $22,000 a year. "Out of the 24 most impoverished North Carolina counties, all but two have per capita sales that exceed the $200.11 statewide figure," the report said. (To see an interactive graphic of per capita lottery sales in the Tar Heel state, click here) Is it not true that a culture will be judged by how it treats its weakest members? [2]

Lotteries have morally degraded this nation. Several years ago columnist Russell Baker gave an apt description of their baneful influence:


"Once you could send your innocent babes, hope of the future, off to the candy store to buy some chewing wax, a Baby Ruth, the new Batman comic book and a kazoo, and be sure in the knowledge that good Mrs. Chesley behind the counter would bust their little knuckles if they tried to buy a copy of The Racing Forum.

Not anymore. Now good Mrs. Chelsey has turned her shop into a gambling hell where she greets the traffic with a leer that says, "Hello sucker," and has to keep kicking the kids out of her way so the lottery players can get their bets down." [3]

Still, since the ascent and acceptance of state-operated lotteries, the simultaneous decline in societal understanding of right and wrong and its imminent dangers are greater than most realize. Every American should be deeply concerned about the negative impact lottery gambling diminishes the dignity of the state, even undermining precious democracy. Taylor Branch, a Pulitzer Prize winning historian on the Civil Rights movement and biographer of Martin Luther King, rightly argued:


"State sponsored predatory gambling is essentially a corruption of democracy because it violates the most basic premises that make democracy unique: that you can be self-governing, you can be honest and open about your disagreements as well as your agreements, and that you trust other people that you are in this together. That's what a compact of citizens is. And the first step away from it is to play each other for suckers. We're going to trick them into thinking they are going to be rich but they are really going to be paying my taxes." [4]


How terrible this nation has sunk. 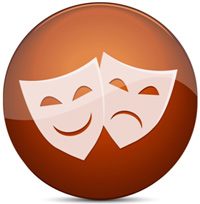 A responsible government, nor a moral people, plays its most vulnerable citizens for fools, or renders large segments of its population as exploitable or expendable. Only a nation with a character deficit would highlight a rigged bet over the very foundations of honesty, self-discipline, sacrifice, saving, hard-work, and brotherly love which support it.

Maybe America should see the Powerball for what it really is — a Powerfall.

Perhaps this nation should recognize that there is much more to the face of a state lottery than happy winners who claim their fortunes. There is a nefarious side, where evil hides in the light.