Rev. Mark H. Creech
What if Mary had known about abortion?

December 15, 2012
Recently I saw a t-shirt that said, "The Virgin Mary was an Unwed Teenage Mother." That's true and it reminded me of an interruption that took place at a Quebec pro-life conference back in October of this year. LifeSiteNews.com says about a dozen pro-choice protestors descended upon an evangelical church where the conference was being held, chanting blasphemous slogans, one of which was a French pro-abortion sing-song against the Virgin Mary: Ah si Marie avait connu l'avortment, on n'aurait pas tous ces emmerdement.s. Translated this means, "Oh, If Mary had known about abortion, we wouldn't have to deal with all this nonsense." [1]

Mary was surely a remarkable young woman. When the angel Gabriel came to her and announced she would bear the Messiah as a virgin, Mary embraced the will of God knowing the sacrifices it would likely bring (Luke 1:26-38). The plans for her marriage would be scuttled. For when the news of her pregnancy reached her espoused husband, Joseph, he would seek to put her away privately. It was only after Joseph was confronted by an angel himself that he decided to follow through on the marriage (Matthew 1:18-20). Her pregnancy would also cast a shadow of scandal over her and her family. This was seen in a skirmish Jesus had with the religious leaders of his day, when he referred to them as children of the devil. They in turn viciously shot-back at Him with the intimation that He was a bastard child, born of fornication (John 8:41).

By today's standards in a culture of death, this teenage mother would have been urged to abort her child. But what if it had been possible for Mary to abort Jesus?

In their book, What if Jesus Had Never Been Born, Jerry Newcombe and the late Dr. D. James Kennedy write at length about the immeasurable impact Christianity has made on the world. They rightly argue that hospitals, universities, literacy and education for the masses, capitalism and free enterprise, representative government, the separation of political powers, civil liberties, the abolition of slavery, modern science, the discovery of the new world by Columbus, the elevation of women, benevolence and charity, higher standards of justice, the elevation of the common man, the condemnation of adultery, homosexuality and other sexual perversions, which has helped spare the human race, as well as save many from great heartache, a high regard for human life, the civilizing of barbaric and primitive cultures, the codifying and putting to print many of the world's languages, the inspiration for some of the world's greatest pieces of art and music, the countless changed lives from liabilities to assets in society — all have their roots in the Judeo-Christian ethic. [1]

Indeed, if Jesus had never been born it would have created a huge black hole bankrupting the world of the sweetest of treasures.

Of course, the birth of Jesus was unique in that God was taking upon Himself the form of a man. That is much of the beauty of the incarnation of Christ. In that act God dignified and imbued every human life with an inherent value. When God robed himself with human flesh, he was communicating to every age this dramatic declaration, "Everybody is somebody special."

During this season of the year, millions of people across the country will enjoy watching the 1946 Frank Capra film classic, It's a Wonderful Life. Jimmy Stewart stars as George Bailey, whose life takes an unfortunate turn and he wishes that he was never born. As George stands on a bridge contemplating suicide, an angel sent from God comes to show him through a series of experiences how the world would have been impoverished without him. Then the angel says, "Strange, isn't it? Every man's life touches so many other lives, and when he isn't around he leaves an awful hole to fill, doesn't he?...You see what a mistake it would be to throw it away."

Unfortunately, we often don't see the real costs abortion precipitates. I'm not one accustomed to quoting Joseph Stalin, but in this case I think it's appropriate. Stalin is reported to have said, "A single death is a tragedy, a million deaths is a statistic." Abortion in America is not just statistics, its 55 million tragedies — 55 million "awful holes" in society. 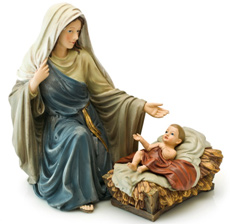 Today thousands of women are considering an abortion. Like Mary, the mother of Jesus, they find themselves in the difficult circumstances of having a child in unfavorable conditions. Surely it crossed Mary's mind that when Joseph found out that she was with child, he wouldn't marry her. Then how would she and her child receive proper support? Surely she thought of the possible humiliation and shame she and her family might undergo. Yet, the Bible teaches this unwed teenage mother accepted God's will and trusted Him implicitly. This is what every woman facing an unexpected and problematic pregnancy ought to do.

Make no mistake. I am not in any way suggesting Mary had been sexually impure. But the situation she faced and its similarities to that of many women who encounter the question of abortion each day is striking, nonetheless.

Si Marie avait connu l'avortment — if Mary had known about abortion — if it had been available to her in her own time — if she had chosen an abortion — life would be like Jack London's character, Wolf Larsen said in Sea Wolf: "Life? Bah! It has no value. Of the cheap things it is the cheapest." [3] It was because of Jesus' birth, the birth of the Son of God — Almighty God Himself identifying with humanity by becoming flesh that every life is sanctified — every life is deemed special.

Abortion is throwaway life filling our world with dreadful and profound holes.