March 2, 2013
Tertullian once said, "Just as Christ was crucified between two thieves, so this doctrine of justification is ever crucified between two opposite errors." Mankind has always rejected the liberty of the soul via two extremes: legalism and license. Legalism seeks salvation through a set of laws or rules, while license embraces unbridled conduct. Redemption, however, is found between the two in Christ, who died to pay sin's penalty and rose again to empower men with a new life bent towards obedience.

One might also contend something similar is true politically. Liberty, unfortunately, is often crucified between two thieves. One erroneously pursues freedom in big government, while the other mistakes liberty for license. Liberty, however, is found between the two and sustained by a commitment to moral restraint.

Recently, I was both saddened and disturbed while watching an episode of the Fox Business Network's "Stossel." John Stossel, the host, had taped his show at the International Students for Liberty Conference in Washington, D.C.. In a debate with former Democrat Rep. Dennis Kucinich, Stossel and more than a thousand young libertarians made clear their abhorrence for Democratic fiscal policies and the way they suppress a free economy. Nevertheless, in a most heated discourse with Ann Coulter they made it equally clear their loathing for Republicans' commitments to social issues.

While watching that broadcast, one emerging fact was undeniable, more and more young people are gravitating toward libertarianism. They've seen and they feel the failure of America's movement away from a free market economy. They've recognized their opportunities and hope of a prosperous future have been significantly diminished by overt government regulation. Still, they don't support laws restricting a so-called woman's right to choose an abortion; they want to repeal all laws against homosexuality; they have no qualms with same-sex marriage; and they support the legalization of drugs, prostitution and gambling.

What's wrong with this picture? Libertarians' desire for smaller government is equivalent to intemperance. Liberty is subject to being crucified in this case next to the thief of license.

Is it any wonder that so many in the second generation of youth to be taught by an educational system that touted evolutionary theory as fact – a system of belief that essentially advocates life is random and has no purpose – a construct that denies any human accountability to God and His law – would lean toward a system of governing that makes whatever a sinful heart desires as the measure of all things?

Mankind was not an accident of nature, but specially made by God in His image. He is not simply a highly evolved animal. He was meant to reflect in his own being the very character of the God who made Him. Therefore, his liberty cannot be known or sustained without recourse to his purpose.

Moreover, no man is an island to himself. Libertarians may argue the government should leave the individual to do whatever he wants so long as it's not hurting anyone else. But it is an absolute law of life that humans are social beings interdependent upon each other, and even their personal acts have social consequences. Children suffer for the sins of their parents. Citizens suffer for the mistakes of their rulers. [2] Abortion, homosexuality, same-sex marriage, drug and alcohol abuse, as well as gambling produce serious problems not just for the individuals who participate in such acts, but for many others too. 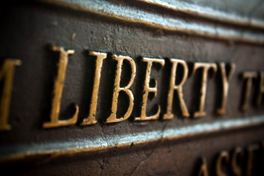 This is not to say all libertarians are godless. Some are Christian. Nevertheless, contrary to their contentions, Christian or not, believer or unbeliever, liberty cannot be detached from the legislating of morality.

George Washington said, "The aggregate happiness of the society, which is best promoted by the practice of a virtuous policy, is, or ought to be, the end of all government...."

Samuel West argued, "[P]erfect freedom consists in obeying the dictates of right reason, and submitting to natural law. When a man goes beyond or contrary to the law of nature and reason, he...introduces confusion and disorder into society...[thus] where licentiousness begins, liberty ends."

If liberty is to be sustained, America must experience a great spiritual awakening that results in turning to Christ and the principles of the Judeo-Christian ethic. The Scriptures admonish, "[W]here the Spirit of the Lord is there is liberty...(2 Cor. 3:17). If there is not once again a moral consensus around these eternal verities, liberty is apt to die between the two thieves of big government and license.

[1] Drawn from a sermon by Kennedy, D. James "Liberty or License" http://www.truthinaction.org/sermon/LIBERTY%20OR%20LICENSE_100671.pdf