March 10, 2013
When wickedness abounded in the world, the Lord came to Noah and said, "Noah, in a short time I'm going to make it rain until the entire earth is covered with water and evil is cleansed. But I have elected to save you, your wife and family, and two of every living thing on the planet. I am ordering you now to build a great Ark." With a flash of lightening the Lord delivered the Ark's specifications.

The Lord forewarned Noah with a voice full of thunder, "Be swift. For in six months the rain shall fall. My Ark must be completed. And my judgment shall not be escaped outside of the Ark." "Okay," Noah replied, trembling in fear and fumbling with the blue prints.

Six months passed and the skies turned gray and the rain drops started coming down. The Lord looked and saw Noah sitting on the front steps of his home weeping. Furthermore, there was no Ark.

"Noah!!" called out the Lord, "where is the Ark?" A lightning bolt crashed into the ground next to him.

"Please Lord, have mercy on me," Noah begged. "I did my very best, but there were so many problems along the way. First, I had to get a building permit for the Ark Construction Project, and officials informed me that your specifications were not up to code. So I was required to hire an engineer to completely redraw the plans. Then Lord, I got into a big fight with the city over whether or not the Ark needed a sprinkler system. But that wasn't all, my neighbors objected too, claiming I was violating zoning rules by building the Ark in my front yard, which required getting a variance from a city planning commission that was already angry with me over the sprinkler system. Then I had a huge problem getting enough wood for the Ark because there was a ban by the Federal government on cutting trees to save the Spotted Owl. I had to convince the US Fish and Wildlife I needed the wood just to save the Owls. But they prohibited any catching of the owls. So, no owls. Then the carpenters that were working for me formed a union and went on strike, requiring me to negotiate a settlement with the National Labor Relations Board before anyone would even pick up a hammer. Now I've got 16 carpenters ready to go on the boat for work, but still no owls. Next, I started gathering up the animals just like you said; only to get sued by PETA. They objected to my taking only two of each kind. When I finally got the lawsuit dismissed, the EPA notified me that I couldn't complete the Ark without filing an environmental impact statement on your proposed flood. Then the Army Corps of Engineers stuck their nose into matters demanding they be given a map of the proposed new flood plain. So I sent them a globe. Right now, I'm still trying to resolve a matter between me and the Office of Immigration about how many Hispanics I'm allowed to hire and under what conditions; and the IRS has seized all my assets, arguing I'm trying to avoid paying taxes by leaving the country. Lord, I don't think I can finish your Ark for another five years or more." 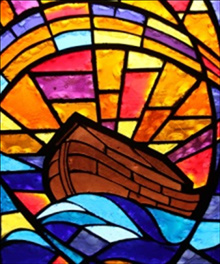 Suddenly the sky started to clear and the sun peeked through the clouds. A rainbow arched across the horizon. Noah looked up, smiled, and asked, "Lord, you mean, you're not going to destroy the earth?" "No," replied the Lord, "It appears the government has already done it." [1]

Its most unfortunate the unfounded faith Americans over the years have placed in Big Government. Now we're seeing the negative results. Our founding fathers believed in a limited role for government. They held a healthy distrust in it. John Cotton of the Massachusetts Bay Colony solemnly warned, "Let all the world learn to give mortal men no greater power than they are content that they shall use, for use it they will."

It's hard to know exactly when America started in this downward direction. Nevertheless, the late Senator Jesse Helms from North Carolina once said he felt it began when "many in America turned away from salvation through Christ to that of salvation through technology or science or material affluence or the welfare state." [2]

Although government has its proper role and our civil responsibilities should never be neglected, if we look to it as Savior, we discover the very thing we hoped would deliver us is the very thing that ultimately destroys us.