June 22, 2013
It is considered a landmark announcement, proof that the cultural winds are shifting in favor of the acceptance of homosexuality by the evangelical community. Exodus International, a ministry devoted to helping people overcome same-sex attractions is shutting down. Alan Chambers, the ministry's president, is apologizing for much of the hurt he believes the ministry has caused the LGBT community.

Chambers, who now rejects the view that sexual orientation can be changed through the Gospel, wrote that he believes there is a sense in which his apology is for the whole church. "[I]f the church is a body, with many members being connected to the whole, then I believe that when one of us does right we all do right, and when one of us does wrong we all do wrong," he said. "We have done wrong, and I stand with many others who now recognize the need to offer apologies and make things right." [1]

But Russell Moore, president of the Ethics and Religious Liberty Commission of the Southern Baptist Convention takes umbrage with Chambers' apology, arguing: "I think there is a tendency to see Exodus folding as a parable of Christian capitulation and ethic. That is not what is happening. Instead what you have is an organization that has some confusion about its mission and purpose...What is not happening here, is an evangelical revision of a biblical sexual ethic." [2]

Peter LaBarbera, who leads Americans for Truth About Homosxuality, would agree with Moore. When OneNewsNow recently asked LaBarbera about Exodus shutting down, he said, "I think Alan Chambers, who basically ruined the organization, had no choice because the affiliates were leaving. All the people who support the truth that homosexuals can change and overcome this perversion through Jesus Christ were leaving Exodus." [3]

LaBarbera, who called Exodus' closing one of the greatest tragedies he had witnessed in the pro-family movement, also shared where he believes the ministry made its fatal mistake. He said, "Homosexuality is about behavior, and behaviors can be changed with the help of God and through Christ...That's what Exodus used to be about. But once they started talking about so called 'gay sexual orientation,' as if this is the inherent state of somebody's being, they got in trouble." [4]

LaBarbera makes a critical point that raises a fundamental question: Is the concept of "sexual orientation" biblical? It is my contention that this expression, which finds its source in modern psychology and is so easily bandied about, doesn't have a biblical leg to stand on.

The Scriptures say, "So God created mankind in his own image, in the image of God he created them; male and female he created them (Genesis. 1:27). When Jesus spoke to the religious leaders of his day about marriage and divorce, a passage certainly related to human sexuality, Jesus referenced the same Genesis passage repeating, "But at the beginning of creation God 'made them male and female.'" (Mark. 10:6).

It's interesting that the concept of "sexual orientation" is based strongly upon one's feelings. How does one know that one is gay? Conventional wisdom says because of the way one feels. Numerous are the individuals who have said, "I've felt that I was gay since I was a child." But if one felt that he or she was a squirrel, would that qualify as proof that one was justified in risking life and limb by climbing trees and eating only nuts? The entire concept is nuts and symptomatic of a postmodernist relativity out of control.

The Bible often speaks about feelings, thoughts, and urges. And what are such but emotions and processes of the intellect that 2 Corinthians 10:5 commands must be brought in subjection to Christ's Lordship.

Jesus said, "From within, out of men's hearts, come evil thoughts, sexual immorality, theft, murder, adultery, greed, malice, deceit, lewdness, envy, slander, arrogance and folly. All these evils come from inside and make a man 'unclean,'" (Mark. 7:20-23). Here Jesus describes a "sinful orientation" that is the inner nature of every person and demonstrates itself in outward behaviors unacceptable with God – acts that estrange a person from God.

The apostle James forewarned about arguments like "sexual orientation" saying they are the same as blaming God for evil. It appears similar arguments were apparent even in his day. He wrote, "When tempted no one should say, 'God is tempting me.' For God cannot be tempted by evil, nor does he tempt anyone; but each one is tempted when, by his own evil desire, he is dragged away and enticed" (James. 1:13-14). To blame homosexuality on heredity is no less than to blame the Creator for one's failure – an argument which is unconscionable.

To those who would contend the Bible is silent about "sexual orientation," let it be said this is because no such notion is based in truth. It is a broad term developed in modern times to provide credence for the growing number of sexual perversions. Even the polygamists and the pedophiles want to get on board.

There is one final point that also ought to be noted. Chambers said something in his apology quite telling. He said regarding the convictions that he and his wife hold: "Our beliefs do not center on 'sin' because 'sin' isn't at the center of our faith." [5] This author begs to disagree with that point of view. Unfortunately, without a clear understanding of sin, there is no need for faith – no need for Christ – no need for a Savior – no meaning to grace. 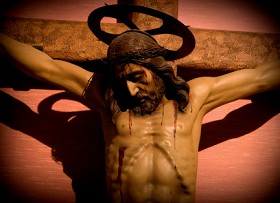 Central to the message of Christianity is that all have sinned and fallen short of God's glorious ideal for life (Romans. 3:23). Apart from repentance, the remission of sin, and the grace of God in Jesus Christ to transform a life to live according to God's standards, the Gospel becomes no more than a soppy code of self-help. What distinguishes it from any other religion or moral force is its promise that Christ suffered, died and rose again not simply to eliminate sin's shame and condemnation, but also to remove its power.

To water down this message with outside worldly, unbiblical influences, is to risk the loss of Christian identity and collapse, which is exactly what happened to Exodus International.

Indeed this is a landmark event. And every Christian denomination, church, church school or university, organization and ministry, should take note with fear and trembling. Exodus International took flight from its own promised land of deliverance and exists no more.