Rev. Mark H. Creech
Legality of tobacco and alcohol is no case for legal pot

April 27, 2014
If I've it heard it once, it seems I've heard a thousand times, "Alcohol and Tobacco are legal in this country. Marijuana isn't as harmful as either one of them. It makes no sense to criminalize the use of pot."

Kevin A. Sabet has written a remarkable book on the prospect of national legalization of marijuana. The book is titled, "Reefer Sanity: Seven Great Myths About Marijuana." Sabet is not exactly what we would call a conservative Republican, or an evangelical Christian. In fact, he's the former Senior Advisor in President Obama's drug policy office. Yet Sabet is firmly against the legalization of cannabis, medicinally or recreationally.

His research is comprehensive, arguing marijuana is not harmless or non-addictive. It is not medicine, smoked or eaten. Countless people are not behind bars simply for smoking weed. Legalization will not solve the government's budgetary issues. Other countries such as Portugal and Holland do not provide successful models for legalization. And, efforts at prevention, intervention and treatment are not doomed to fail.

But I suppose it was Sabet's chapter debunking the myth that the legality of tobacco and alcohol strengthen the case for legal marijuana that I personally found most compelling. Having served fourteen years as a lobbyist for the Christian Action League, I know from experience the power of "Big Al" and "King Tob" in the legislative arena.

In North Carolina, the home of flue-cured tobacco, tobacco has always been King. That influence has diminished only slightly with the N.C. General Assembly passing legislation in 2009 to prohibit smoking in restaurants, bars, and other public places. Alcohol, however, is still an extremely powerful lobby in the state. And, the alcohol industry, which contributes generously to political campaigns of lawmakers, remains exceedingly formidable and usually gets whatever it wants.

That being said, Sabet rightly contends our history with alcohol and tobacco provides clear warnings against the legalization of marijuana. Not only are the total social costs associated with these two legal drugs roughly around $200 billion per substance – far outweighing any tax revenue collected from their use, but these licit drugs create huge corporations that have no incentive to curb use and continually seek profit at expense of the public's health. There is little reason to believe legal marijuana would be any different.

Sabet rightly asks, "Do we really want Big Cannabis to emerge and become like Big Tobacco, making lots of money from people's addictions and burdening society with perpetually increasing healthcare costs?" His research notes Big Tobacco's interest in marijuana as an alternative product, siting the tobacco industry has already been advised that it has "the land to grow it, the machines to roll it and package it," and, "the distribution to market it."

Unfortunately, tobacco has a history rife with corruption and deceit. Despite their assertions to the contrary, it is well-known and proven beyond a reasonable doubt that Big Tobacco lied about the lethal effects of tobacco use, targeting their advertising at youth, and manipulating the levels of nicotine in their merchandise. They offered products that supposedly were less harmful such as filtered cigarettes, light cigarettes, and smokeless products, none of which were really safer, but each designed to keep smokers from quitting. They engaged in a willful campaign of suppressing scientific evidence against smoking and paid for research and scientists who would say whatever they wanted them to say.

Is there any good reason to believe legal marijuana, which undoubtedly would morph into an incredibly dominant enterprise, would be any different? Absolutely not!

The liquor trade hasn't been any better. It's a long-established fact that even though the industry argues for responsible use, they know full well their profits are not made from casual drinkers but from heavy users.

Sabet quotes Mark Kleiman, Professor of Public Policy at the UCLA Luskin School of Public Affairs and editor of The Journal of Drug Policy Analysis – someone whom Sabet says has been equally skeptical of anti-marijuana efforts and marijuana legalization. Kleiman says:


"The entire marketing effort [for alcohol] is devoted to cultivating and maintaining the people whose use is a problem to them and a gold mine to the industry...Divide the population into deciles by annual drinking volume. The top decile starts at four drinks a day, averaged year-round. That group consumes half of all the alcohol sold...[The] booze companies cannot afford to have their customers 'drink in moderation'...[Most] of those folks [heavy drinkers] have an alcohol disorder. And they're the target market...[So] the prospect of a legal cannabis industry working hard to produce as many chronic stoners as possible, and fighting hard against any regulation, fills me with fear."


It is the nature of industries like tobacco and alcohol that must be taken into account. We cannot realistically expect that addictive industries such as these will properly police themselves with respect to marketing or anything else. Their primary objective is profit and not the well-being of their clientele. Concerns about health, addiction, or the way their business affects the poor and most vulnerable, are largely irrelevant to them. To add another addictive form of commerce, like marijuana, would likely over time compound the cultural damage and communal price to a place of utter ruin. 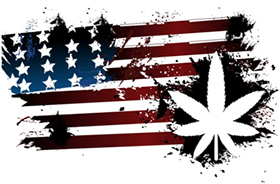 "The legalization of marijuana would be a simplistic solution to a complicated problem. It would increase use and, with it, a host of attendant social problems. If anything, our experience with alcohol and tobacco over the past few centuries demonstrates that if these drugs are to be 'models' for legal marijuana, then we'd better buckle our seat belts, because we are in for a long and rough ride."


So if I've said it once, I've said it a thousand times, because tobacco and alcohol are legal is no reason to make marijuana legal. If anything, it shows us that we should keep pot illegal.