Rev. Mark H. Creech
Voting: how hungry and thirsty are you for righteousness?

October 26, 2014
In his great Sermon on the Mount, Jesus said, "Blessed are those who hunger and thirst for righteousness, for they will be filled" (Matt.5:6). Bible commentator William Barclay once wrote that it is difficult for us to feel the full import of Christ's words in this text. Unlike the people living in Palestine at the time – people for whom hunger and thirst were a problem every day – few moderns living in a period of prosperity know anything about real hunger and thirst.


"So then, the hunger which this beatitude describes is not genteel hunger which could be satisfied with a mid-morning snack; the thirst of which it speaks is no thirst which could be slacked with a cup of coffee or an iced drink. It is the hunger of the man who is starving for food, and the thirst of the man who will die unless he drinks...In effect [this Beatitude] demands, 'How much do you want goodness? Do you want it as much as a starving man wants food, and as much as a man dying of thirst wants water? How intense is your desire for goodness?" [1]


Certainly, the heart of what Jesus is talking about pertains to a hunger and thirst within to be in right relationship to God. Nevertheless, I would suggest Jesus is not only referring to personal righteousness, but also corporate.

Indeed, says Jesus, those who have an intense hunger and thirst to know God will be filled. Moreover, those who intensely desire to see justice and right-living pervasive can change the world.

In his memorable sermon, "Will the Church Forget?" [2] the late Dr. D. James Kennedy noted William Butler Yeats poem, The Second Coming. [3] There is a line in the poem, said Kennedy, which can be applied to much of the church today. Yeats writes, "The best lack all conviction, while the worst are full of passionate intensity." That's more than an apt description of our time. The worst among us – the gay activists, the pro-choice crowd, the ACLU, the Freedom from Religion Foundation and all the others who make up the radical left – are full of passionate intensity – while God's people seemingly lack all conviction.

What greater demonstration of this lack of passion for cultural righteousness is there than the poor attendance by professing followers of Christ at the polls.

Sadly, only about 50 percent of Christians in the U.S. are even registered to vote. Of the 50 percent registered only half of them will actually show up at the ballot box, meaning 75 percent of God's people are not taking advantage of one of their greatest means of making a difference in America – their right to vote. [4] If Christians would use their freedom to vote, much of the torn moral fabric of this nation could be mended.

Another show of a lack of zeal for a godly society is the Christian's lackadaisical approach to the way he or she votes. Some vote lazily with their political party without ever giving the issues serious consideration. Others vote largely for short-sighted reasons, not considering the long-term effects of a candidate's policies, but only some perceived immediate benefit or the preservation of some selfish end.

Voting authentically Christian means having a vision for a state, nation, or world that works as God ordered it. It means endeavoring to obtain as much reliable information as possible on the candidates and their stands before voting. It means carefully sifting through that data and allowing the Bible to interpret it. It means voting for the nominee whose personal principles and policies for governing are the closest to a strong Christian worldview.

Lastly, there is no sadder display of a lack of appetite for the healing and hope of a nation than those who are ready to give up.

In North Carolina, many Christian voters who supported the state's marriage amendment by more than a 60 percent margin feel angry and disenfranchised by a recent federal judge's ruling that erroneously overturned the amendment as unconstitutional. They say it shows their vote doesn't count, and, therefore, they don't intend to vote this year. 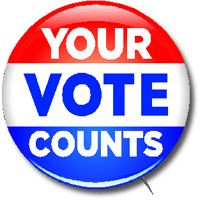 Make no mistake, voting counts. In fact, the incumbent US Senator for North Carolina running for re-election recommended to President Obama, the same activist judge who struck down our state's marriage amendment. Consequentially, the President appointed him to the bar. Such action can best be held accountable inside the voting booth.

When I was a boy in school, my coach had a sign in the locker room for all the ball players on the school's team that read: "Quitters never win! Winners never quit!"

Quitting is no option for the believer. We must keep our hands to the plow and not look back. Christ did not quit, even when all appeared lost. Instead, he picked up His Cross and went all the way to Calvary with it. Christians will have to do likewise if they are to bring redemption to a broken and fallen land.

How hungry are you for righteousness? How thirsting are you for justice, morality, and decency to prevail in our state and nation? Are you more hungry and thirsty for virtue than the wicked are for iniquity? What sacrifices are you willing to make for the fulfillment of righteousness?

Surely, the least that you could do is register to vote, come hell or high water make your way to the ballot box, and vote your Christian values.