February 14, 2015
When President Obama gave his State of the Union Speech this year, sitting on the front row were the U.S. Supreme Court Justices, as usual, but Justice Ruth Bader Ginsburg was strangely slumped over. Was she sick? Was she put to sleep by the President's speech?

Was she just too tired from a hard day?

No, it turns out she was a bit inebriated. Uh huh, that's right. According to her own testimony in a recent interview hosted at George Washington University and moderated by NPR's Nina Totenberg, she was drunk.

Speaking of that night, Ginsburg said, "The audience – for the most part – is awake because they're bobbing up and down all the time and we sit their stone faced, sober judges. At least I wasn't 100% sober because before we went to the State of the Union we had dinner." [1]

She said Justice Anthony Kennedy brought wine with him. "[I]t was an Opus something or other, very fine wine that Justice Kennedy brought," she said, "and I vowed this year just sparkling water, stay away from wine. But in the end, the dinner was so delicious it needed wine to accompany it." [2]

And that's not all. The Washington Post reported in 2013, Justice Ginsburg said a "very good California wine that Tony Kennedy brought" was the same reason she dozed during the President's State of the Union speech in 2012. [3]

Of course, when Ginsburg admitted she suffered from too much to drink the night of the President's speech, the audience attending the interview erupted in laughter. Moreover, most of the news articles that covered her confession have done so with much levity.

It's not funny! A Supreme Court justice so juiced-up she's passed out while representing the nation's highest court in our nation's capital, in the presence of Congress, before the President of the United States, televised in front of a national audience, is nothing to laugh about. It's shameful!

But to be fair, apparently this disgrace is not exclusive to Justice Ginsburg. Congress seems to have alcohol issues. In 2009, while making his flawed case for the legalization of marijuana on CNN's Larry King Live, Ron Paul attributed "current laws to a widespread fear of political retribution in Congress, among many members who 'drink a lot of alcohol' at that." [4] When host Joy Behar asked Paul if he was saying there were a lot of alcoholics in Congress? "Paul backpedaled. 'I said there's a lot of people in Congress who drink a lot of alcohol.'" [5]

That assertion by Paul is evidently true and lawmakers, as well as their staff, are not just drinking on personal time, but also on the job.

The online news site NW Daily Marker broke the story in December of 2011 that three aids were fired by Rep. Rick Larson, a Washington State Democrat, who learned his office had "been the setting of a staffers-gone-wild bash, a binge of embarrassing behavior" – evidently Larson's legislative aids spent much of their time boozing it up in the office. [6]

In 2013, the Huffington Post reported that Capitol Hill boozing had become a trend. Only hours before a government shutdown, "Congressman couldn't seem to agree on much except the fact that drinks were in order." Reporters were tweeting they could smell alcohol on the lawmakers working to strike a last minute deal. [7] Rep. Alan Grayson (D) charged Republican House members were literally intoxicated "while casting votes on the continuing resolutions that set the stage" for the government shutdown. [8] But Democrats did plenty of boozing themselves in 2010 when Obamacare passed in the House, "much of it at the Tune Inn, a drive bar just blocks from the Capitol, but plenty of it inside the building as well." [9]

The incongruity of this is policemen can't drink while on duty. Physicians are not allowed to drink while on duty. Numerous companies prohibit their employees from drinking during work or even showing up under the influence of alcohol. Drinking on the job or suffering from intoxication during work will get you fired in many places, if not most. Yet, a U.S. Supreme Court Justice nodding off from too much wine while attending one of the nation's most significant annual events precipitates a lighthearted and flippant response?

How is it that someone of such incredible responsibility as Ginsburg – someone who is supposed to inspire faith in the national judiciary – an individual who serves as the legal conscience of a people – is held to a much lower standard than many of the nation's average citizens?

The same could be legitimately asked of Congress and its staffers.

Is it any wonder with such poor role models underage drinking is epidemic? If the nation's highest leaders, its supposedly most responsible citizens, won't demonstrate proper discipline in drinking, how can we expect the nations' youth to listen to admonishments to abstain from alcohol until they turn 21? No one can spot hypocrisy better than a teenager. 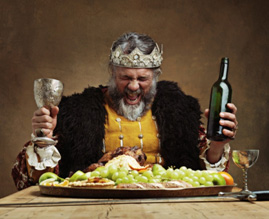 The Scriptures proclaim that kings and priests are not to drink lest they pervert justice. Proverbs 31:4, 5 read, "It is not for kings, O Lemuel, it is not for kings to drink wine; nor for princes strong drink: Lest they drink, and forget the law, and pervert the judgment of any of the afflicted." These words are not a prescription for kings or political leaders to drink moderately. Instead they contend that their positions are of such gravity, they shouldn't drink in any amount.

Spare this author the angry emails, telephone calls, or other contacts that essentially say he needs to lighten-up. No, it's true! America needs more and deserves better than a wine-drunk, liquored-up, leadership. It's not funny and it shouldn't be acceptable.