January 10, 2016
It's called "Dry January." It only got started in recent years and is practiced largely in the United Kingdom. To be more exact, in 2014, the charity, Alcohol Concern registered "Dry January" as a trademark. In 2015, Public Health England partnered with the group for its January campaign.

"Dry January" is the custom of urging people to abstain from alcohol use for the first month of the New Year. The primary purpose is to change what has become a dangerous drinking culture. If people see the benefits of reducing their alcohol intake, then they and their friends might choose to do the same.

Ian Hamilton, in an article originally published on The Conversation, argues that there has been an increasing trend in overall consumption of alcohol in the UK in the last sixty years.

He says that with the increases in consumption has also come a rise in public health issues.

Hamilton is not a supporter of the movement, but he does make a telling statement about the use of beverage alcohol. He writes:

"If we discovered alcohol today, we would restrict and criminalize its use in the same way we have for drugs such as heroin. Objective examination of harms associated with 20 of the most commonly used legal and illegal drugs ranked alcohol as the most dangerous." [1]

Certainly this is not to make the case for bringing back Prohibition, nor does it make the case for the legalization of recreational drug use. It does, however, state succinctly and accurately the inherently problematic nature of alcoholic beverages.

Of course, alcohol use and abuse is a problem for Americans too. In October of last year, the Centers for Disease Control and Prevention released a study that revealed excessive drinking cost the U.S. $249 billion in 2010. That's up from $223.5 billion in 2006. [2]

Dr. Robert Brewer, head of the CDC's Alcohol Program and one of the study's authors said, "The increase in the costs of excessive drinking from 2006 to 2010 is concerning, particularly given the severe economic recession that occurred during these years." [3]

Moreover, drawing from new federal data, the Washington Post, reported last month that alcohol deaths in the U.S. have reached a 35 year high. "Last year, more than 30,700 Americans died from alcohol-induced causes, including alcohol poisoning and cirrhosis, which is primarily caused by alcohol use. In 2014, there were 9.6 deaths from these alcohol-induced causes per 100,000 people, an increase of 37 percent since 2002." [4]

These deaths were more than those from overdoses of prescription painkillers or heroin use combined and did not include deaths from drunk driving or homicides committed by people who were drunk. [5]

With such compelling data cited, certainly there must be wisdom in a campaign that urges people to give up their booze for 31 days. At least, this is what the findings of a study led by Rajiv Jalan at University College London revealed. The study determined that people who successfully abstained from alcohol for the duration of one month experienced significant health benefits.

Liver fat, which is a known prelude to liver damage, fell by 15 percent and almost 20 percent in some individuals. Blood glucose levels in abstainers, which is a critical factor for diabetes risk, dropped by 16 percent on average. [6]

Abstainers also reported that they slept better and were more focused than usual. Plus, because refraining from alcohol for a month results in a massive reduction in calorie intake, participants in the study also reported weight loss. [7]

In other research compiled by the University of Sussex, England, abstaining from booze for a month showed 72 percent of individuals sustained reduced levels of harmful drinking six months later, while 23 percent who had "harmful" alcohol consumption levels when they started Dry January had dropped to a low-risk category, and 4% were still completely dry six months on. [8]

Amazing! In other words, giving up the "giggle water" for just a little while (31 days) is no laughing matter.

But what if people just gave it up altogether?

There was an interesting article by comedian and writer, Andy Boyle, in the Chicago Tribune recently. Boyle said two years ago he decided to take a breather from drinking. What he learned from his two-year hiatus has now gone viral.

Here's a short list of his accomplishments. He lost 75 pounds, bought an amazing loft condo, finished a first draft on a book, exercises now four days a week, went from a size XXL to a size Large, went from a 42 inch waist to a 36 inch, performed in three comedy festivals, got a great new job, finished multiple drafts of television and movie scripts, and went from hating himself daily to relatively enjoying himself. [9] 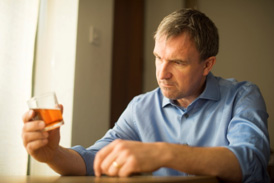 He adds his accomplishments are only what he can show on paper, but there are other benefits of giving up "the sauce" just as valuable to him. Such as:
So why not give it a try? Why not put down the bottle or that cocktail glass for just 31 days. It doesn't have to be a full month of January for you to take up the challenge. Who knows, you might find you don't need or want it anymore like you did before. You may even decide it's in your best interest to leave the hootch for good.