February 6, 2016
At the recent National Prayer Breakfast held in the nation's capital, President Obama gave a speech using the text, 2 Timothy 1:7, which reads "For God has not given us a spirit of fear, but of power, and of love, and of a sound mind." It was, admittedly, an eloquent speech.

In the speech, the President talked about major changes in the country that precipitate fear. "Like every president, like every leader, like every person, I've known fear," he said. "Fear does funny things. Fear can lead us to lash out against those who are different or lead us to try to get some 'sinister other' under control...Fear can feed our most selfish impulses and erode the bonds of community," he added.

The speech, unquestionably, was a veiled indictment of those who have opposed the President's agenda as a form of fear-mongering. Calm down, the President, seemed to say, everything is going to be alright. We're experiencing seismic shifts, but we'll get through this like we have other challenges in the past.

There's another fear that's especially useful – the fear of the Lord. The Psalmist wrote, "The fear of the LORD is the beginning of wisdom; all who follow his precepts have a good understanding." (Psalm 111:10).

It's this fear, a reverential respect and awe for God and his order, which the President seems completely devoid of possessing. That's quite disconcerting, and rightly so. It may seem out of step with the times, but the fact remains that God still judges nations and their leaders. There appears to be every reason to be alarmed the President and his cohorts have so removed this country from its Judeo-Christian moorings, it could be lost to sea forever.

No President in America's history has done more to support and advance abortion. He has used the bully pulpit of his Presidency, as well as the powers of his office, to normalize homosexual behavior and to promote same-sex marriage. He has decidedly worked to dismantle The First Amendment, diminishing religious liberty and removing God from the public square. He has steadily sought to undo the Second Amendment, which not only gives Americans the power to defend their life, liberty and property from criminals, but also against a rogue government. With Obamacare, he has moved this nation closer than ever to becoming a socialist state. He has sought to "fundamentally transform" this country by forcing a radical social agenda via every level of our national life, from the military bunkhouse to the courthouse to the schoolhouse.

Regardless of the number of times, the President says he is a Christian, he demonstrates a preference for the religion of Muhammad. He rescinds an invitation to Franklin Graham to speak at a Pentagon prayer service and invites the Muslim Brotherhood to the White House. He covers a Cross and all Christian symbols at a Catholic University while giving a speech, but then speaks at a Mosque with known terrorist ties and stands in front of a glass wall where the name Allah is repeatedly written in Arabic calligraphy.

I believe the President's words at the National Prayer Breakfast, meant to assuage the nation's fears, instead work to anesthetize us from the dangers ahead. They may taste sweet to the anxious, but their end will be bitter for everyone. They are like the violinists who played while the Titanic was sinking.

Fear is indeed useful if it drives us to our knees in repentance. Jesus is indeed the cure to fear, if we fear him as the Judge of all the earth more than we love our sins. God indeed gives power, and the love and the sound mind to conquer all fears, if we fear God above all. But we have no right to the text the President quoted while we shake our fist in defiance of God's commandments. Nor do we have any reason to be comforted from some impending disaster, "for the wages of sin is death" (Roman 6:23).

Let me reiterate that the fear I speak about is one based in the wonder of God, His sovereignty, and His mighty power.

In his book, A World of Ideas, Bill Moyers quotes writer Jacob Needleman:

"I was an observer at the launch of Apollo 17 in 1975. It was a night launch, and there were hundreds of cynical reporters all over the lawn, drinking beer, wisecracking and waiting for this 35-story-high rocket.

"The countdown came and then the launch. The first thing you see is this extraordinary orange light, which is just at the limit of what you can bear to look at. Everything is illuminated with this light. Then comes this thing slowly rising up in total silence because it takes a few seconds for the sound to come across. You hear a 'WHOOOOOSH! HHHHMMMM!' It enters right into you. You can practically hear jaws dropping. The sense of wonder fills everyone in the whole place as this thing goes up and up. The first stage ignites this beautiful blue flame. It becomes like a star, but you realize that there are humans on it. And then there's total silence. 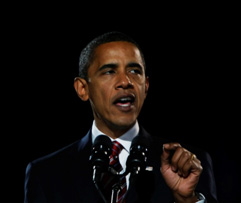 "People just get up quietly, helping each other. They're kind. They open doors. They look at one another, speaking quietly and interestedly. These were suddenly moral people because the sense of wonder, the experience of wonder, had made them moral."

Those who fear our wondrous God know the feeling – a feeling that translates into right living.

President Obama has taken our country down an immoral path, and I suggest he is unqualified to instruct anyone about fear. Moreover, we don't have any reason not to be frightened until we as a people repent of our wicked ways, receive God's grace in Christ, and return to doing His will.