With four bullets now in his skull, Alberto decided to shoot himself somewhere else. This time he pointed the gun at his stomach and pulled the trigger. The gun fired, but Alberto was still conscious. So he shot himself again in the stomach, but Alberto did not die.

Finally, Alberto had the sense to give up, proving that perseverance is not always a virtue. [1]

One can only wonder as to how many times the Charlotte City Council will injure themselves, as well as the Queen City before they abandon their stubborn ways.

Monday night, City Council members approved a new ordinance by a 7-4 margin that adds "sexual orientation," "gender identity" and "gender expression" to the City's non-discrimination law. The new ordinance permits an individual, regardless of his or her biological anatomy, to use any restroom, locker room or changing room, with whichever gender he or she identifies. Similar ordinances have also been used in other cities around the country to punish bakers, florists, photographers, innkeepers, wedding venues, etc. for simply exercising their First Amendment right to practice their faith by not participating in same-sex ceremonies.

Last year, when the ordinance was first proposed, it was met with severe opposition from the community. More than 40,000 emails were received by Council members on the matter. During a five hour long meeting, more than 100 people spoke and approximately 60% of the speakers expressed opposition. People from every walk of life loudly resisted, clergy, business owners, people from academia, soccer moms, concerned fathers, all spoke with passion, often citing Scripture, arguing the measure would make women and children vulnerable to sexual predators and diminish religious freedoms.

This year, the newly elected Mayor Jennifer Roberts, vowed to bring the proposal back. This time it was met with even greater antagonism than before. City Council members were presented with a petition of nearly 22,000 people asking them to vote "NO." They received more than 250,000 emails against the ordinance's adoption. During a rally on the same day of the vote, 14 experts warned the City Council of the dire consequences the ordinance posed, while nearly 1000 people stood resolute in the driving rain to protest it. High profile ministers like Franklin Graham and others besought the City Council to be reasonable. In the chamber, Council members listened to over two and half hours of public testimony from 140 citizens on the meeting floor.

Even the Governor, Pat McCrory sent a letter to the City Council beseeching them to drop the plan and vowing to take state action to overturn it if passed. Still, Council members defied it all! 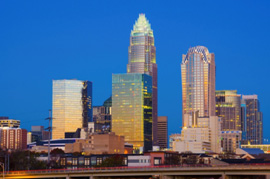 This occasion reminded me of something the late Clovis G. Chappell, pastor of the First Methodist Church in Charlotte, warned about in a sermon several decades ago.

Chappell said the ugly vice of stubbornness can be easily confused with the fine virtue of firmness. He wrote:

"Firmness is a sound and solid virtue that we cannot but admire. We thrill at the firmness of Daniel as he purposes in his heart that he will not defile himself. We cannot withhold our admiration from Paul as, confronting heavy dangers, he declares, 'None of these things move me.' We take off our hats to Martin Luther as he faces the perils of his day with the declaration, 'Here I stand; I can do no otherwise – God help me.' But that which makes the conduct of these men admirable is that they are standing by their reasoned convictions...Stubbornness is not only dangerous because it often gets itself mistaken for virtue, but because it tends to close the door of the mind...Stubbornness is dangerous because the stubborn man is always right. Of all the hard folks to live with, none is harder than the one who is never wrong. What havoc such an attitude works..." [2]

One can only hope now the Governor will act quickly and call for a special session of the North Carolina General Assembly before Charlotte hurts itself and its citizens any further. Perhaps the Governor can show Charlotte City Council members the difference between stubbornness and firmness.