A Virginia state trooper, who was a member of the bomb squad, and his dog, Master Blaster, took on celebrity status when they found bombs at malls in Hampton and Virginia Beach, Virginia.

Later, however, a hidden camera would reveal that the trooper actually planted bombs at two malls, a courthouse, and a coliseum. He told investigators that he hadn't hurt anyone. The bombs, which were simply made of a cardboard tube filled with explosives, and pipes filled with gunpowder, never exploded. He said he was just trying to – enhance his image.

It's not uncommon for people to build themselves up before others by either stretching the truth or being downright deceitful. When people are in the grips of some illegitimate pursuit, they can rationalize almost anything.

A few weeks ago, a coalition of groups opposed to HB 2, North Carolina's common sense "bathroom bill," rallied outside the State Capitol Building. In front of the podium, where ten speakers addressed a crowd of about 200, there were stacks of boxes, maybe two dozen or more. The boxes were supposedly filled with signed petitions to deliver to the Governor's office, calling for the repeal of HB 2.

The Press says that more than 185,000 petitions were delivered, but it turns out that the boxes were just props. Governor Pat McCrory's office released a statement announcing that there were only enough signatures "to fill two boxes, and the overwhelming majority of signatures were from out of state."

Maybe their use of the boxes as props was just for – enhancing their image. Props are unquestionably used to create false impressions.

A little more than a week ago, the Obama administration sent a letter to Governor Pat McCrory claiming that because of the state's implementation of the "bathroom bill," North Carolina was in violation of Title VII of the Civil Rights Act of 1964 and Title IX of the Education Amendments of 1972, as well as the Violence Against Women Reauthorization Act of 2013. The letter threatened to withhold federal education funding if HB 2 wasn't repealed.

Rather than capitulating to the administration's intimidations, the Governor promptly responded with a lawsuit. In its complaint, the state accuses the Department of Justice of engaging in "blatant overreach." The lawsuit points out that "the overwhelming weight of legal authority recognizes that transgender status is not a protected class." It also contends that if the United States desires a new protected class, it has to seek action by the United States Congress.

In response, U.S. Attorney General, Loretta Lynch, escalated tensions by announcing at a news conference, a "significant law enforcement" action – a lawsuit against the state of North Carolina. Lynch reiterated the threat that the Department of Justice retained authority to remove federal funding if the state didn't comply with the administration's radical interpretation of the law – an interpretation that requires women who want an education must be willing to shower with members of the opposite sex.

But within a couple of days, the White House backed down, stating that federal funding while the lawsuits were pending would not be in peril.

Of course, federal funding was never really in jeopardy. It was all a bluff, something gamblers, crooks, and liars often employ when they want to – enhance their image.

Lynch, not only sought to bluff the state of North Carolina, but she also made a wrongful comparison by drawing similarities between the state's "bathroom bill" to segregation and the days of Jim Crow laws.

"This is not the first time that we have seen discriminatory responses to historic moments of progress to our nation," she said during the press conference. "We saw it in the Jim Crow laws that followed the Emancipation Proclamation."

Interestingly, former black Presidential candidate, Ben Carson, completely rejected the comparison made by Lynch, when asked about it by Fox News. Carson said with considerable zeal, "That's what they always say. Everything is like Jim Crow. Everything is like racism and segregation and slavery. What a bunch of crap! You know, they want to do that so that they can always gain the sympathy, but thinking people know better." 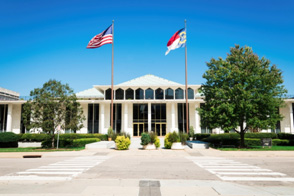 Yeap, that's right! Thinking people should know better when they see people in the grips of some illegitimate pursuit. They can rationalize almost anything, using props, bluffs, and wrongful comparisons to – enhance their image.

The opponents of HB 2 and the Obama administration are playing a dangerous game with the truth that puts our republic at risk. Like the trooper who staged an effort to rescue people from a problem that didn't exist, they seek a solution in search of a problem.

It is the Governor who signed the bill and state lawmakers that passed it, who truly want to preserve the will of the people and our nation's system of checks and balances by defending the law.

We should stand with them and work to expose every prop, bluff, and wrongful comparison.