Rev. Mark H. Creech
A very private moment: has it happened to you?

June 26, 2017
I've been reading the book of Genesis lately and the story of Joseph is a fascinating one.

Unjustly despised by his brothers and secretly sold to a band of merchantmen, Joseph was taken into Egypt and made a slave. Later he would be wrongly accused by his master's wife of sexual assault, and though he was innocent imprisoned. Eventually, he was vindicated and released and in the providence of God raised to the position of vice-regent in Egypt.

When a famine swept the land, his treacherous brothers were forced to go into Egypt to buy food and were confronted unawares by Joseph. They had not seen him for several years and didn't recognize him. Moreover, Joseph purposely hid his identity from them until he would choose the right time to reveal himself.

I think it's interesting that the time of Joseph's disclosure to his brothers was a private one. The Scriptures say, "Then Joseph could not refrain himself before all them that stood by him; and he cried, Cause every man to go out from me. And there stood no man with him, while Joseph made himself known to his brethren" (Gen. 54:1).

Joseph then manifested his true identity, reached out in a spirit of reconciliation, and forgave his brothers their grievous trespasses against him. As one commentator has described it, Joseph demonstrated a "love stooping, a love conquering." The Bible says that Joseph kissed them and they all fell upon his neck and wept in true remorse for what they had done to Joseph.

Joseph is a type of Christ and the revelation of Christ to the soul is perhaps the most private of experiences.

Christianity is not simply the truth, an institution, a philosophy, or a code of ethics; although in one sense, it is all of these things. It is, however, more importantly, and fundamentally, a Divine, living, and loving Person. 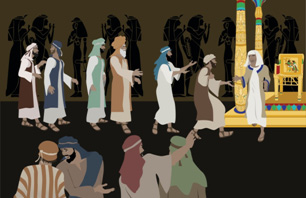 At the heart of a genuine Christian faith is that very private moment when we are confronted in our spiritually treacherous ways by the Savior, Jesus Christ. When Joseph revealed himself to his brothers, it was very personal and rather than being reproached by him, they experienced his splendid magnanimity and consequentially reproached themselves. It is the same when Christ reveals himself to us. We discover him that is full of grace and mercy. We see that He loves us. We see that he wants to embrace us. He wants to forgive us and be reconciled, despite the severity of our sins against him.

Have you ever experienced such a private moment with God in the person of his Son, Jesus Christ?

Of course, if you have, then you know that although a personal experience with the Savior is a private one, our newfound relationship with him can never be a secret. Joseph saved his brothers when he could have justly destroyed them. They owed him everything. It is for us to go far and near with this same message that our Lord is willing to reveal himself and receive all that come unto him by Christ.