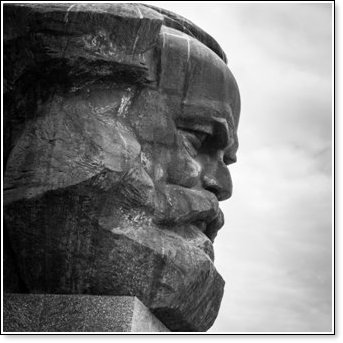 By the time most of you read this editorial, the Workers World Party will have celebrated on May 5th the birthday of Karl Marx at locations across the country. Marx was the father of socialism and communism.

Ezekiel chapter 28 in the Bible recounts Ezekiel's prophecy against the wicked King of Tyre. But most scholars agree that Ezekiel's message is about more than the king. It's about the Evil One behind the king's activities, Satan.

Socialistic and Communistic principles are the doctrines of devils masquerading as hope and help for the proletariat – the marginalized or working class people. It is an evil system to be feared, deeply rooted in deception, promising a "people's government," but delivering despotism. It has been responsible for the death and impoverishment of millions throughout the course of history.

A recent World Net Daily article rightly noted that there is a place in America, however, that despite the despicable nature of Communism, it "enjoys unbridled popularity." It is a place where Marx's book, "The Communist Manifesto," is the most popular book today.

Where? you ask. The answer: "[O]n American college campuses."

The WND Exclusive says, "That's according to data from Open Syllabus Project, which tracks books and other works assigned to students in more than 1 million syllabi. The database is assembled using computer algorithms that scrape the data from publicly available sites... Many notable works, including the Bible and the U.S. Constitution, don't appear in the data set"

WND adds, "But it's not just Marx you'll find on American Campuses. You'll also find his followers. Decades ago, U.S. News and World Report reported there were 10,000 Marxist professors. No one is keeping track today."

Speaking of Christianity, although many Progressive Christian churches often applaud and commend socialist principles (there is only a sliver of difference between socialism and communism), the church has traditionally, and rightly condemned this system of thought.

The church condemns it because the Scriptures teach that private property is a God-given right. Economic systems perpetuating or constructing dependence, while also rewarding sloth, strike at the very heart of what it means to be a human being. Both socialism and communism suppress the image of God in man, his creativity and productivity, punishing individuals when they succeed, even when their success is attained by a legitimate means. Class warfare is certainly wrong, but it's not inevitable. Moreover, the Scriptures reject earthly utopian visions as untenable, declaring that Christ is the Savior of the world and not government.

Progressive churches are riddled with socialist and communist influences today. They see Jesus as a revolutionary and not as someone who deals with sin in the traditional way, but in a material way. As George Elerick says in a HuffPost article, "Jesus was a strict materialist (both philosophically and in everyday life)." He argues individualism is to be rejected because it "creates the gap between the individual and the collective." For example he says, "In the story of the rich man, we have two characters: a rich guy and the bourgeois; and the poor man and the proletariat. We have the 99 percent and the 1 percent."

Elerick's interpretation is not a pure form of Christianity but one corrupted and shaped by Marxism. It's a belief that essentially ignores the Bible's clear teaching about personal sin and the individual's desperate need for redemption in Jesus Christ. It's a theology which claims that if man's environment is changed, he will change. He'll love and treat his brother as he ought.

This is a damnable and devilish heresy amidst Christian ranks, which as J. Wallace Hamilton once said, profoundly threatens God's blessed bequest of freedom: freedom to choose our own way, freedom to make or mar our destiny, freedom to climb the heights or sink in the depths. It is to turn the gift of liberty over to the strong man, and ultimately lose our personalities in the mass mind and the mass will.

But I suggest there may be an even greater facilitator of socialism and communism than that of the colleges and liberal churches. It is when conservative evangelicals treat their faith as an opiate. Marx contended that "religion...is the opium of the people."

Bishop Gerald Kennedy in 1960 touched on this in a sermon titled, "Communism in the Churches." He declared the church was using the Christian faith like a drug with morphine-like effects.

"What is the message of the church in America? Very often it is a message of adjustment. We are supposed to use our religion merely as a technique of getting along with other people and accepting the conditions of our existence without protest. We do not talk very much about being converted to a new life," argued Kennedy.

"From many a pulpit, the voice of the preacher has become a lullaby accompanied by violins...The Christian message when it is not contaminated with this communist poison is prophetic and often fierce," Kennedy said. "The Christian word is to repent and be saved...It is a word of judgment as well as righteousness...Our examples are the apostles and the martyrs rather than well-meaning, harmless people whose good intentions have all the toughness of a marshmallow."

According to the American Action Network, in 2016, polling revealed nearly six-in-ten Democratic primary voters believed that socialism has 'a positive impact on society." Furthermore, who would have ever believed an avowed socialist, Bernie Sanders, would be a major contender for the Presidency.

Exceedingly nefarious forces are working to destroy America, and they've had profound success. Behind them is the devil himself.

Christ's followers need to purify themselves, clean up before a holy God, and proclaim the Gospel of Jesus Christ. They also need to boldly bring the principles of the Word of God to bear on sin and the social evils of our day, one of which is socialist and communist influences.