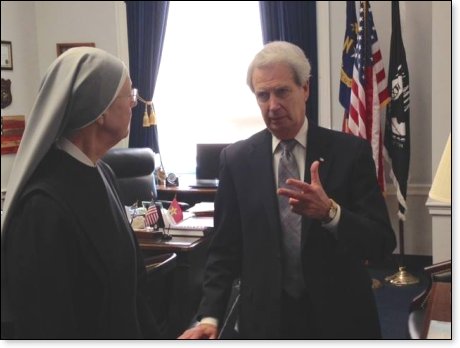 Someone, who was something of an institution in North Carolina, died on Sunday, February 10th. Sunday too is an institution and a sacred one at that. And it was somewhat fitting that this man of tremendous faith would die on the day of rest. Congressman Walter B. Jones, Jr. ceased his earthly work and entered into that great rest – the final rest – reserved for those who know God and do his will.

Jerry Schill, director of government affairs for the North Carolina Fisheries Association, noted in a Facebook post that in its reporting on Jones' death, the media highlighted things such as his push to rename French Fries, "Freedom Fries," because France opposed the U.S. led military action against Iraq. The way Jones was a "'maverick' that changed his position about the Iraq war." His acts of penance because of his vote for that war and the way he sought "to honor and remember those members of the military who lost their lives in Iraq and Afghanistan," by sending thousands of cards and letters to their grieving families.

But Schill added that anyone who knew Jones and understood what made him tick was aware of his deep and abiding faith in Christ and his fearlessness in proclaiming that faith. "And he did so everywhere," Schill demonstrably insisted. "As was stated over and over and over again at his funeral and in numerous interviews, he just wanted to always do what was right, and he used his faith as a guide to get him there."

He was deeply concerned about where America was heading spiritually and morally. He told The Nation, "I am at a point where I just wonder: Are we in the final days of a great nation? I'm thinking that, going back to the Bible, we're on the verge of Revelations. The nation that has been blessed in so many ways has forgotten the blessings."

On the matter of abortion, Jones said during the 46th anniversary of the March for Life, "An unborn child is a gift from God that is entitled to be protected. That fundamental principle must be reflected in our nation's laws."

On the matter of same-sex marriage, Jones also told The Nation, "There's some documents that you can't rewrite, and truthfully one of them is the Bible."

The Family Research Council, a conservative Christian public-policy organization in Washington, D.C., said Jones had a 92 percent voting record on their scorecard.

There were, admittedly, some issues where conservative evangelicals parted with Jones. Nevertheless, as the announcement of his passing from his office read, "Some may not have agreed with him, but all recognized that he did what he thought was right."

Perhaps one of Jones' greatest stands for what is just and right was his advocacy for repealing the Johnson Amendment. The Johnson Amendment is the law that prohibits all 501(c)(3) non-profit organizations, including churches, from electioneering – endorsing or opposing political candidates.

Jones was the principal Congressional advocate opposing the Johnson Amendment, rightly blasting it as grossly unconstitutional and discriminatory against houses of worship. He introduced legislation for its repeal almost every session of Congress since 2001.

Alliance Defending Freedom, a Christian legal organization that focuses on religious liberty issues, has also vigorously campaigned for repealing the Johnson Amendment since the 2010s.

ADF has referred to the Amendment by using an expression from West Virginia politics, calling it a "fat opossum," because, like the marsupial, it was snuck through under the cover of darkness and into the tax code with essentially no "legislative analysis, no committee hearings, and no debate."

ADF quotes James D. Davidson, a professor at Purdue University, who sites the political and legislative history of the Amendment, arguing:

"'The ban on electioneering is not rooted in constitutional provisions for separation of church and state. It actually goes back to 1954 when Congress was revising the tax code, anti-communism was in full bloom, and elections were taking place in Texas. In this highly-charged political environment, Lyndon Johnson introduced an amendment banning section 501(c)(3) tax-exempt organizations from participating in 'any political campaign on behalf of any candidate for public office'. ... Johnson was not trying to address any constitutional issue related to the separation of church and state, and he did not offer the amendment because of anything that churches had done. Churches were not banned from endorsing candidates because they are religious organizations; they were banned because they have the same tax-exempt status as Facts Forum and the Committee for Constitutional Government, the right-wing organizations that Johnson was really after.'

"The Johnson Amendment is a big fat opossum. It was a bill that got inserted into the tax code through back-room deals made by a powerful Senator who wanted to be able to seek reelection at any cost and, in the process, trampling freedom of speech and the free exercise of religion. We have grown up with a generation of church-goers that believe it is illegal for their pastor to address candidates and elections in light of Scripture or church doctrine when there is no valid justification for believing that.

Efforts to repeal the Johnson Amendment have been close to success before, the last try under the title, The Free Speech Fairness Act. But no attempt has ever quite gotten over the line.

President Trump has been an ardent supporter of repealing the Johnson Amendment. He campaigned on it. Still, the best he has been able to do is sign an executive order which essentially rendered it toothless.

There's no question the President's executive order strengthened religious freedom. But what happens if a future, hostile administration, is elected in 2020? Then the threat to religious liberty will only raise its ugly head again. The Johnson Amendment presents a serious legislative problem, which certainly requires a serious legislative solution.

John F. Kennedy, the 35th President of the United States, once eloquently stated: "A nation reveals itself not only by the men it produces but also by the men it honors, the men it remembers."

No one was more enthusiastic for religious freedom than North Carolina's Congressman Walter Jones. With Democrats controlling the U.S. House and Nancy Pelosi as Speaker, there doesn't seem to be much hope for the passage of legislation repealing the Johnson Amendment for the next two years. But should Republicans regain the House, keep the Senate, and President Trump is re-elected, there ought to be a measure introduced and passed by Congress with the legislative title, "The Walter B. Jones, Jr. Religious Liberty Act/Repeal the Johnson Amendment."

For Jones' colleagues to honor and remember him in this way or something similar to it would be most appropriate. Indeed, every member of Congress who loves religious liberty should do it.

Indeed, America should do it.