Rev. Mark H. Creech
It should be called 'Declaration of Independence Day' 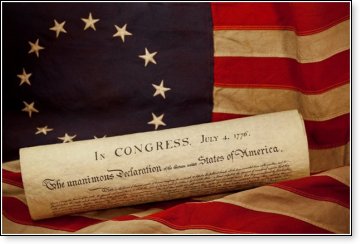 July 4th – it is the main national holiday of the United States. We call it Independence Day. Alan Keyes, former ambassador during Reagan days and conservative political activist, pundit, and author today, says it really ought to be called "Declaration of Independence Day."

"It's the date on which the 2nd Continental Congress adopted the words that were even more resounding than the famous 'shot heard round the world.' For they resounded for decades, two centuries worth and more, as oppressed people took up the thought of God-endowed equality and unalienable rights," says Keyes.

"We hold these truths to be self-evident, that all men are created equal, that they are endowed by their Creator with certain unalienable Rights, that among these are Life, Liberty, and the pursuit of Happiness – That to secure these rights, Governments are instituted among Men, deriving their just Powers from the consent of the governed – That whenever any Form of Government becomes destructive of these ends, it is the Right of the People to alter or abolish it, and to institute new Government, laying its foundation on such principles and organizing its powers in such form, as to them shall seem most likely to affect their Safety and Happiness....

"For the support of this Declaration, with a firm reliance on the protection of Divine Providence, we mutually pledge to each other our Lives, our Fortunes, and our sacred Honor."

Keyes rightly contends that our nation has characteristically forgotten the beliefs that made up the Declaration of Independence and provide the foundation for our system of government. "In the present generation, America's politics, its media, and much of its corporate life are dominated by an elitist clique that rejects the Declaration," he says.

"They reject it because it evokes the existence of God....They reject it because they have rejected the rule of reason that accepts man's dependence upon the prior determinations of God as the premise of understanding human nature and human liberty. They reject it because they have rejected the faithful logic that recognizes God as the source of the wisdom that is indispensable if we are to appreciate the self-evident truths that establish human equality and God-endowed rights as the sine qua non of justice and true liberty," says Keyes. "You can't have it both ways. Either our rights come from God, as our Declaration of Independence says, or they come from human choice. If they come from human choice, then our whole way of life is meaningless, it has no foundation."

Keyes is so very right! The intellectuals, the liberals, and the leftist elites are opposed to the traditions and standards outlined in the Declaration, and unfortunately they have succeeded in convincing too many Americans that their views are the right ones. But they are foolish profligates of the American way. And they should be viewed and treated like the bad company good parents tell their children to avoid.

More than two decades ago, a noted British journalist, Steve Turner, articulated what he contended was the Apostle's Creed of the humanist's vision for our country. He wrote it somewhat jokingly, but it's very serious nonetheless. He said:

In celebration of Independence Day, let us rededicate ourselves to those great principles contained in the Declaration of Independence. May we also pledge our lives, fortunes, and sacred honor to rejecting godless notions and schemes that would, as Keyes has so eloquently put it, "implement the very species of totalitarian government Americans have spent more than a lifetime working, fighting, and giving their lives to eliminate as a threat to humankind."