Rev. Mark H. Creech
Are Southern Baptists about to miss another exceptional opportunity? 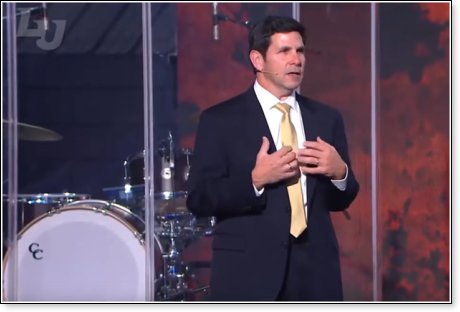 Someone once said, "Be grateful for the doors of opportunity  and for friends who oil the hinges."

That's how I feel about a recent magnanimous offer made to Southern Baptists by apologist Alex McFarland about six weeks ago. In the wake of their previous president, Russel Moore's departure from the SBC's Ethics and Religious Liberty Commission (ERLC), Onenewsnow.com reported McFarland offered to fill the position pro-bono. "I would like to give back to the denomination that invested itself in me. It will not cost the SBC a penny, and I can virtually guarantee giving to the Cooperative Program will go up," said McFarland.

In my estimation, the ERLC couldn't find a more qualified candidate. He's been with Southern Baptists since his conversion to Christ. He has zealously proclaimed the Gospel of Christ in over 2000 churches both nationally and internationally. Having been the third president of Southern Evangelical Seminary in Charlotte, which specializes in apologetics, and served as Director of Apologetics at North Greenville University in South Carolina, McFarland has been teaching believers how to effectively defend their faith for quite some time. Moreover, he has never hesitated to boldly address the controversial social issues of our day from a solid Christian worldview.

His resume is stellar, and lest I be perceived as exaggerating, I'm only mentioning a fraction of what he's done for the cause of Christ.

Still, one other thing should be added. Some leaders can be quite knowledgeable but not so communicable. Not McFarland. He's been a frequent spokesperson on Fox News and interviewed by numerous national media outlets, including Fox and Friends, Billy Graham's Decision radio broadcast, Focus on the Family radio, NPR's All Things Considered, The New York Times, and The Washington Post, to name a few. He's a prolific author, having written numerous books on Christian themes and been a contributing writer to the L.A. Times, Boston Herald, OK-Celebrity News Magazine, Christianity Today, Charisma, On Mission, Billy Graham's Decision magazine, and many more.

Being Southern Baptist myself, since Moore took the reigns of the ERLC, I have had grave concerns that the Christian convictions of fellow Southern Baptists were not sufficiently represented. For those of us who look to the ERLC as our advocate in the public arena, Moore's leadership was unquestionably a departure from the strong conservative direction it had under Dr. Richard Land for twenty-five years. Like many, I hesitated to criticize because I wanted to give the ERLC leadership every chance to prove itself. It didn't. Instead, it did more to divide Southern Baptist churches and leaders on key gospel issues in society and split their ability to successfully engage the culture with a sure word from the Scriptures.

Southern Baptists are the largest protestant denomination in the United States. The Convention is made up of many theological and political views. Nevertheless, generally speaking, there is a consensus on most social issues and considerable leverage for political persuasion that ought to be tapped and brought to the table. After Land, it was never appropriately utilized.

The ERLC should have partnered with other dynamic nationally conservative activist groups and been in the very vanguard of influence for traditional Christian values. Instead, Moore seemed to stand aloof from the religious right while also disparaging the robust kind of leadership provided by former evangelical leaders who elevated social and political-religious conservatism to a place of prominence.

Furthermore, I thought the ERLC was too distracted with telling everyone why they should reject Donald Trump. Mind you; Trump directed the friendliest administration to conservative evangelicals in American history. Yes, I agree Trump was not perfect and didn't always behave in a thoroughly Christian manner. Nevertheless, for once, a President demonstrated he was taking conservative evangelicals and their contentions seriously. It was an unprecedented opportunity squandered.

I want to see the ERLC trending in the right direction again. Its positions and actions shouldn't even smell of progressivism. Still, I fear it won't happen unless a new guard is restored to prominence more like the old guard.

Today, Southern Baptists need a strong man of God in the office of the ERLC, who will say to our wayward country, "Thus saith the Lord."

McFarland has written, "We live in an age in which entire denominations are abandoning biblical principles for the sake of cultural acceptance. Yet our Lord has not called us to convenient lives, but lives of conviction. In addition, Southern Baptists stand in need of spiritual awakening. We cannot overlook past sins in our churches, including pride, immorality, and discrimination, but instead, look to the Lord for the solution to our weaknesses and as the power for our future. We will not change our culture by embracing it! Our culture stands in need of change, and it is a change too big to accomplish in our own strength. We need the power of God's Holy Spiritif we desire to live with the eternal impact our Lord Jesus demands."

Just as the apostle Paul asked how shall people hear without a preacher (Rom. 10:14), I ask how Southern Baptists will lead America back from the precipice without sound Christian leadership in the ERLC?

Has anyone contacted McFarland about his offer? Has anyone taken up his name for consideration? Or are we about to miss another exceptional opportunity?