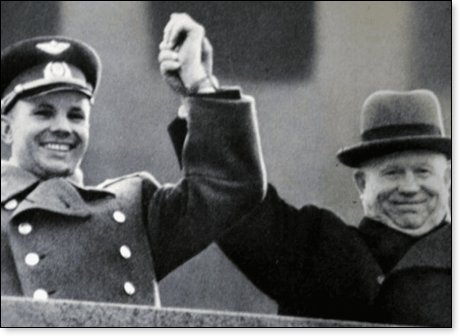 Over sixty years ago, the Soviets made their first space journey around the globe. Atheistic cosmonaut Yuri Gagarin returned puffed-up with pride, boasting, “I went up to space, but I did not encounter God.” W.A. Criswell, the pastor of the First Baptist Church of Dallas, Texas, had a classic response the following Sunday. He said, “Ah, if that cosmonaut had stepped out of his spacesuit, he would have seen God.”

In Revelation chapter 5, the apostle John didn’t have to die to see the Lord. He was miraculously transported to stand before God’s throne in heaven and report what he witnessed to us.

Around God’s throne, the apostle said he saw various orders of beings, four creatures, twenty-four elders, and an innumerable host of angels in concentric circles around the throne. He also caught sight of seven torches ablaze, a sea of glass, and an emerald rainbow.

As he gazed in awe at this other-worldly scene, John heard a mighty angel shout, “Who is worthy to break the seals on this scroll and open it?” (v.2).

With its seven seals, the scroll would be the title deed to earth with commissions to complete God’s redemptive purposes for the world. At first, it appeared no one was worthy of taking the scroll. Consequently, the apostle wept bitterly, fearing all was lost for humanity. But one of the elders told him to stop lamenting and not to despair, for the Lion of the tribe of Judah had proven himself worthy to break the seals and open the scroll.

When John looked to see the Lion, he said he saw a lamb instead – the Lamb of God, Jesus Christ, who shed his blood on the Cross to atone for the sins of humankind. God’s judgment fell on Christ for everyone who believes the Gospel and receives him as Savior and Lord. The Lamb has redeemed everything that was stolen by the Evil One and foolishly surrendered by humanity.

Note that there is something unique about this Lamb. This Lamb is said to have “seven horns and seven eyes, which represent the sevenfold Spirit of God that is sent out into every part of the earth.” (v.6).

Seven horns and seven eyes? What meaneth this?

Seven in the Scriptures signifies perfection. It refers to completion.

In other words, seven horns signify perfect and complete power. It’s a reference to Christ’s omnipotence. Jesus said of himself, “I have been given all authority in heaven and on earth” (Matthew 28:18). Revelation 19:16 says of Jesus, “On his robe at his thigh was written this title: King of all kings and Lord of all lords.”

Jonathan Edwards, the American revivalist, philosopher, and Congregationalist theologian, said that when he was first converted to Christ, it happened to him with what can only be described as sudden enlightenment.

He was at home and alone on a Sunday when some hindrances kept him from attending church with the rest of his family. With a couple of hours free to himself and nothing to do, he lazily shuffled to the library room of the house and discovered a lackluster volume with no title to its leather binding. His curiosity was peaked to know the book’s content. So, he opened it to find that it was a Bible, wherein he randomly came upon the verse: “All honor and glory to God forever and ever! He is the eternal King, the unseen one who never dies; he alone is God. Amen” (I Timothy 1:17).

Edwards wrote in his journal that the verse’s effect was to alarm and awaken him. In some magnificent and profound way, it caused him for the first time to consider the vastness and majesty of the true Sovereign of the universe.

Out of this he said there came an intense emotional pain from the guilt of resisting such a Monarch for so long. Before, he had experienced only slight notions of his sin against Christ and very little remorse for it. At that moment, however, he felt the most profound regret and contrition.

The Lamb has seven horns. He has perfect and complete power. His will cannot be routed or vanquished. He rules over nature and every experience of mankind. Heavenly inhabitants bow to him and his word. Even Satan, in his rebellion against God, cannot overpower him. Christ sets barriers to the malignities of every devil. Therefore, it is both wise and prudent to surrender to this benevolent ruler, the Savior, Jesus Christ, whose power knows no bounds. 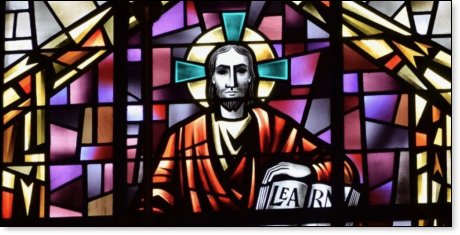 The Lamb has seven eyes, too. These eyes “represent the sevenfold Spirit of God that is sent out into every part of the earth” (v.6). These eyes have perfect and complete sight. They see everything. Nothing is hidden from them. The Lord Christ is omniscient, all-knowing.

John Phillips says of Christ in Exploring the Gospels that during the Lord’s earthly sojourn:

He [Jesus] walked a hedgerow and plucked a blade of grass. He had created it; he knew about its structure, about photosynthesis, about the mystery of a plant’s pollination and germination, and all its complex chemistry. He walked beside the sea of Galilee; he knew the topography of that lake, every deep and shallow place, every pebble on the bottom, each and every fish darting through its waves. The world was made by him; he knew all about astronomy and chemistry, physics and biology, mathematics and medicine. He knew every law now known to science and every law not known to science, not because he had studied them but because he was the author of them all. He looked at the world through the eyes of a man but somehow, in the mystery of his being, he had infinite understanding of all things.

The Creator trod those Galilean fields and walked Jerusalem’s streets. Wisdom, love, and power looked out of those eyes…He was in the world, the world was made by him, and the world knew him not [John 1:10]. To John [the same John who wrote the book of Revelation], that was a supreme tragedy and irony. People rubbed shoulders with God, [Jesus Christ – God in the flesh] yet were too blind to see.

Yet our Lord sees everything! He sees us. He knows everything about us. He knows the number of hairs on our heads. He knows everything that has happened, is happening, and will happen. Because he is Deity, he has no past, present, or future. We can’t fully grasp this with our finite minds. As Williams Evans says in Great Bible Doctrines, we are but mortals who stand by a river in a low place and can only partly see. Christ, however, is like someone high and aloft in the air, who can see the whole course of the river, how it rises and how it runs. 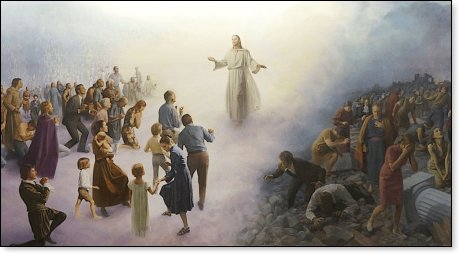 When our Savior first came, his eyes were full of grace and longing for our reconciliation with the Father. When he comes the second time, these same eyes will burn red with the wrath of a deeply offended King, whose exceedingly generous demonstrations of wisdom and power have been unjustly cursed, ridiculed, neglected, or denied. In his judgments, he will not make the slightest mistake because the seven spirits of God – the Holy Spirit will rest on him without measure.

Christ, the Lamb, with his seven horns and eyes, shall take the scroll. He will break each of its seals, opening each chapter of the earth’s final days, and order the completion of its restoration and redemption. Then everyone, everywhere, will know there is a God in heaven who is worthy to rule and reign forever.