Tom DeWeese
National Cattlemen's Beef Association wants seat at the table; winds up in bed with torture, rape, and murder

March 20, 2020
Below is an article by an associate of Tom DeWeese at the American Policy Center, Kathleen Marquardt, the Center's vice president.

The National Cattlemen's Beef Association (NCBA) has said they need a seat at the table with the World Wildlife Fund (WWF) in order to beef's interest. You have to ask yourself, why would the NCBA, a meat producing organization, want to be aligned with and organization which has stated that "to save the Earth it is demanded that we change human consumption habits away from beef."

Forget the seat at the table. Forget stopping people from eating meat. The question becomes, "Why would the NCBA want to crawl under the covers with an organization that is up to its eyeballs in torture, rape, and murder.

Consider this new report on WWF. BuzzFeed News, according to Wikipedia is seen as a left-leaning site, so this story cannot be called a hit-job by the right. At the behest of Survival International (SI), they have been investigating reports about WWF's actions in Africa.

SI's concerns for the actions of WWF are based on SI's viewpoint that "the model of conservation imposed by big NGOs (like WWF, Wildlife Conservation Society, African Parks, The Nature Conservancy, Conservation International, etc) in Africa and Asia is "colonial conservation." ' SI contends colonial conservation "is based on the idea that indigenous and tribal people can't be trusted to look after their land and that those best placed to protect the environment are Western conservation organisations and their "fortress conservation" model." There are another six points of this definition that you can read here.

More on the Survival International story later, I would like to offer up some background facts on WWF. This information is from Ron Arnold's Trashing the Economy, published in 1993: Being the Number Three Economy Trasher in Arnold's great reference book, there are almost 30 pages of information on the WWF. I recommend reading it.

All this tells me that WWF has long been a tool in the globalist's box of tricks to do away with property rights, and that includes ranching, obviously. Therefore, there can only be nefarious reasons for NCBA to be a tool of the WWF.

Back to Buzzfeed's reports.

I have given a short précis of each report below, with links, and recommend that you read the reports – especially #8. And if anyone can show me where I and BuzzFeed are wrong about WWF, please let me know. 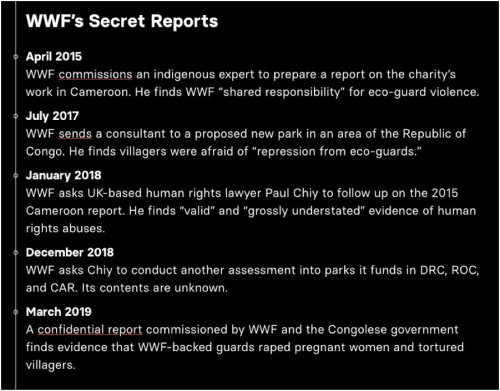 Part 1. Last year, BuzzFeed News did a series of stories on WWF, starting with the first one titled, "WWF Funds Guards Who Have Tortured And Killed People." These several paragraphs should give you the gist of the piece:

"An autopsy showed seven broken ribs and "blue marks and bruises" all over his body. Seven eyewitnesses corroborated his wife's account of nonstop beatings. Three park officials, including the chief warden, were arrested and charged with murder.

"The World Wide Fund for Nature (WWF) had long helped fund and equip Chitwan's forest rangers, who patrol the area in jeeps, boats, and on elephant backs alongside soldiers from the park's in-house army battalion. Now WWF's partners in the war against poaching stood accused of torturing a man to death.

"WWF's staff on the ground in Nepal leaped into action – not to demand justice, but to lobby for the charges to disappear. When the Nepalese government dropped the case months later, the charity declared it a victory in the fight against poaching. Then WWF Nepal continued to work closely with the rangers and fund the park as if nothing had happened.

"As for the rangers who were charged in connection with Shikharam's death, WWF Nepal later hired one of them to work for the charity. It handed a second a special anti-poaching award. By then he had written a tell-all memoir that described one of his favorite interrogation techniques: waterboarding.

"Shikharam's alleged murder in 2006 was no isolated incident: It was part of a pattern that persists to this day. In national parks across Asia and Africa, the beloved nonprofit with the cuddly panda logo funds, equips, and works directly with paramilitary forces that have been accused of beating, torturing, sexually assaulting, and murdering scores of people. As recently as 2017, forest rangers at a WWF-funded park in Cameroon tortured an 11-year-old boy in front of his parents, the family told BuzzFeed News. Their village submitted a complaint to WWF, but months later, the family said they still hadn't heard back."

Part 2 A Leaked Report Shows WWF Was Warned Years Ago Of "Frightening" Abuses. It included these points:
The views expressed by RenewAmerica columnists are their own and do not necessarily reflect the position of RenewAmerica or its affiliates.