Tom DeWeese
SledgeHammer Action Alert!
HR 1  The legalization of fraud. Its happening this week, and it must be stopped! 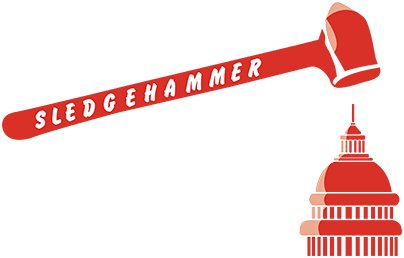 Speaker Nancy Pelosi and her mob are determined to legalize all the tactics used to steal the 2020 election. That way they can assure no candidate who opposes the drive to install their brand of American Communism can never be elected to public office.

Not to the Presidency. Not to Congress. Not to State Legislatures. Not to City Councils.

All the details are included in H.R. 1, named the For the People Act. How clever these thieves are with their words!

Well, here are the details that will be cemented into law if this outrage is passed. Ask yourself  what people is this for? Not you!

This provision creates automatic voter registration, unless the individual declines to be registered. How many dead people will be registered?

Theres much more in H.R. 1 to fear, but these are the biggies! Every provision of H.R.1 is designed to eliminate any attempts to protect the ballot box and will legalize the massive fraud we all experienced last election day.

Thats why 16 Secretaries of State from across the nation have come out against H.R.1 as unconstitutional and harmful to democracy.

H.R.1 is the very first bill Speaker Pelosi rushed into the legislative hopper in this new congress. Clearly their intentions are to make sure opposition will never rise again.

The bill is scheduled to be voted on this week and is almost sure to pass the Democrat-controlled House of Representatives.

But it can be stopped!

The key to stopping H.R.1 is in the Senate, which is spilt 50-50m between Democrats and Republicans. In a deeply divisive bill like H.R.1, Senate rules allow a Republican filibuster that would require 60 votes to stop it. That will kill H.R. 1!

Thats why it is urgent that we flood the Senate with phone calls! Call your states two Senators.

Call Democrat Senators as well. They must know there is massive opposition to this assault on our nations voting system.

Ask to be connected to your Senators!

Demand that they stand strong and oppose H.R.1

Please take immediate action and make these vital calls now  today. And please share this Sledgehammer Action Alert with family and friends. We must flood the U.S. Senate and kill this bill. Or it will kill America!