Tom Kovach
Obama - born under a bad moon
At the exact time of Obama's birth, there was a crescent moon - the symbol of Islam

September 8, 2009
The controversy over the birthplace of Barack Hussein Obama II, the alleged president of the United States, continues to simmer just below the boiling point. On the political Right are those that claim Obama's birth at hospital in Kenya makes him ineligible to be the president. On the political Left are those that claim the Right's allegations are "racist" in motivation, or are "irrelevant." Their implication is simply, like that of Rodney King, "Can't we all just get along?"

Every time the simmer begins to cool slightly, another detail arises. The latest is a report in WorldNetDaily that a man is risking a charge of perjury by submitting an affidavit that a document he recently submitted is, in fact, a true photocopy of Obama's original birth certificate from Coast Hospital in the city of Mombassa, Kenya. 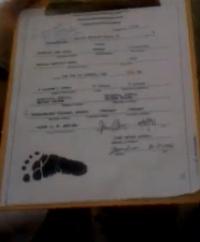 Copy of birth certificate from Kenya,
alleged to be that of Barack Hussein Obama II
Image source: WorldNetDaily
In late June of this year, WND reported that the same document was for sale on the e-Bay auction Web site. The document has survived scrutiny from critics  something that other documents, believed to be efforts to sidetrack the eligibility issue, have not done. If he was truly born in the United States, then Obama could end the controversy by simply releasing his background documents. Instead, he has paid huge sums to legal teams to keep those documents out of the public view. Such actions, of course, only fuel speculation that Obama has something to hide.

Obama has long claimed that his birthdate is 04 August 1961  a date that matches the Kenyan document. In fact, that date is publicly available on a copy of his draft registration form (which has also come under fire). Obama has also admitted to having been raised a Muslim. In fact, during his election campaign, he recited Muslim prayers in fluent Arabic during a news interview. And, as both my book Tribulation: 2008 and the previous issue of The Crossbow point out, Obama has never publicly renounce Islam.

And, that leads us to the main thrust of this column.

At the date and time that Barack Hussein Obama II was born on the east coast of the Muslim country of Kenya  where Christians are still taken captive and sold into slavery  there was a crescent moon in the sky. The crescent moon is the symbol of Islam.

Moon phase at time of Obama's birth
(A crescent moon is the symbol of Islam. What does this mean?)
Source: US Naval Observatory, moon-phase calculator
I believe that Obama is fully a Muslim. Further, I believe that he is, to borrow a phrase coined by author and columnist Jack Cashill, "The Mansourian Candidate." Both his father and his step-father were not only Muslims, but also Socialists. And, after the second divorce by Obama's mother, young "Barry Soetoro," a.k.a. Barack Soetoro, a.k.a. Barack Hussein Obama II, was placed under the influence of known Communist agent and organizer Frank Marshall Davis. So, all of the facts indicate that Obama is both a Muslim and a Communist. Obama's only purported connection to Christianity goes through a "pastor" that has substituted a racist anti-White, anti-capitalist, anti-American political agenda for the Gospel of Jesus Christ. Thus, from his birth, Obama has been thoroughly indoctrinated in philosophies that are against the Christian foundations of this nation. That, of course, makes him an enemy of the United States. Yet, he now sleeps in the White House.

The above would not make any sense  unless, of course, there is something much larger at work here. Again, my book Tribulation: 2008 explains this in greater detail. But, the short version is that Jesus said that there would be "signs in the sun, moon, and stars," so that Christians would not be deceived as we approached the time of His return. Why would He have referred to astronomical events as important guideposts? Because no one on Earth has control of such events. Therefore, when all of the signs point in one direction, and those signs are beyond the control of humans, then those signs must confirm the predictions made in the Word of God about the imminent return of the Son of God.

The previous edition of The Crossbow reported that an upcoming gathering of Muslims on Capitol Hill in DC coincides with the plans for Obama to host a meeting between the Prime Minister of Israel and the alleged president of the alleged country of "Palestine" (which, in the Arabic language, is Filistin  just like the Philistines of ancient times). I believe that the timing of those two events is no accident. But, is there more?

Could it be true that Obama is the Mahdi?

The Muslims are looking for one man that will usher in the "seven years of peace" predicted in their Qur'an. But, the Muslim definition of "peace" is total world domination by Islam. Simultaneously, the prophecies of the Book of Revelation in the Christian Bible predict seven years of evil persecution against Christians. This will be orchestrated by the leaders of a worldwide religion. That religion will be a blend of existing world religions  except, of course, for Christianity  and will ultimately focus upon one man: The Anti-Christ. As events unfold here in the United States, we see more and more emphasis upon one man: Barack Hussein Obama II. Is it possible that the man the Muslims seek to lead the world into global acceptance of Islam is the same man that currently occupies the leadership position of a nation founded upon Christian principles? Is it possible that God is punishing that nation for abandoning those principles? Is it possible that one man will work against those principles, and will be rewarded with earthly political power? (Well ... for a short time, anyway.) Is it possible that we are standing on the brink of the destruction predicted in the Bible? And, is it possible that the man planning to usher in that destruction is Barack Hussein Obama II?

Regardless of your answers to the above questions, one thing is certain: Obama was born under a bad moon.