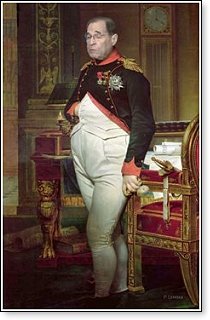 You've got to hand it to Jerry Nadler and the Democrats. They know just how to sound righteous, patriotic, and even noble when they want to. For two years, they posed as champions of democracy, railing about treason at the highest levels of government. "America deserves better," they proclaimed. And today when they're pontificating about abuse of power, threats to our democracy, the rule of law, and congressional oversight responsibility, why it's nothing less than inspirational.

Their tenacity – maybe obstinacy is a better word – whatever you call it, is also unsurpassed. Even after the Mueller report established once and for all that there was never a smidgeon of collusion between the Trump campaign and the Russians, Nadler and the Democrats remain undeterred in their quest for the moral high-ground.

But there's another facet to the Democrat Party, one that contradicts that noble facade, a darker, more cynical side. It emerged right after President Trump won the 2016 election. The new Democrat mantra was touted by party members from top to bottom. Even their defeated presidential candidate proudly recited it: "Resist, insist, persist, and enlist." From the beginning, Democrats in Congress decided they would never work with this president. Fulfilling their other congressional responsibilities had become unimportant to them. And it was more than just mindless obstructionism. It was a determined effort to scatter throughout the land the seeds of hatred, suspicion, and division. The slanderous brand of "traitor" was just the beginning. Because Trump is committed to border security, they decided they could label him and his supporters as racist and xenophobic. In fact, they did, and are doing everything they can to convince the country that Trump opposes American values, and that he is unfit for office.

But America, itself, once the source of immeasurable pride to both political parties, became collateral damage to Trump-hating Democrats, eager to appease their base. In answer to Trump's signature campaign motto, Andrew Cuomo publicly offered this disgusting observation: "America was never that great." That sentiment, almost word-for-word, was echoed by another Democrat, one who's actually campaigning for the presidency.

Even the Democrat candidate who lost to Trump in 2016 suggested that she was cheated out of the presidency – whining that our presidential election, a hallmark of our democracy, was somehow unfair, perhaps even fixed. Hillary Clinton may know a thing or two about fixing elections, but no one has ever produced a shred of evidence that Russian interference changed a single vote in that election.

Their unbridled hatred of President Trump seems to extend to everything he touches, and their plan to reclaim the White House is becoming apparent: Tarnish the president and everyone associated with him, and convince the voters that his administration is hurting the country.

Their agenda is also reflected in their impeachment fixation. One highly visible Democrat Congresswoman began babbling about impeachment before Trump was even inaugurated, and she's never stopped babbling. Despite the absence of "high crimes and misdemeanors," other Democrats have joined her refrain. During the hearing on William Barr's contempt citation, Rep. Hank Johnson revealed the unvarnished truth when he rhetorically asked, "How can we impeach without getting the documents?" Having already decided on the punishment, Democrats are now desperate to find a crime.

So now Nadler and his committee, proceeding at breakneck speed, have managed to cite a Trump appointee with contempt of Congress. Their justification? The Attorney General declined to provide the committee with an unredacted version of the Mueller report. He declined to violate federal law by revealing ongoing investigations, grand jury, classified, and other protected information. As Nadler and his committee of crusaders make plans to recklessly target others in Trumps' administration, the awesome responsibility of congressional oversight is beginning to look more like a dangerous toy in the hands of children.

After their vote, Nadler again felt that urge to sound righteous and noble, "We did not relish doing this." They were defending the very essence of our democracy, he claimed.

But their history of hate reveals their true purpose. Objective Americans recognize political motivation when they see it, and they know that abuse of power can occur at any level of government.