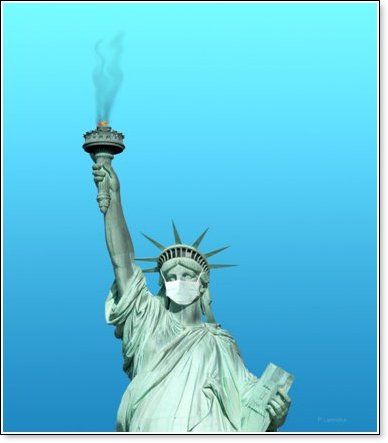 The economic paralysis we're suffering today is catastrophic, but it's just what the doctor ordered.

Looking back, it's clear the medical profession was caught off guard by the coronavirus. When it first appeared in China, the medical community here was, at most, cautiously concerned. Dr. Anthony Fauci, Director of the National Institute of Allergy and Infectious Diseases, is recognized as the leading expert in his field. During a Jan. 28 interview, Fauci confidently reassured us that "this is not a threat to the people of the United States, and this is not something that the citizens of the United States right now should be worried about." A month later, on February 29, as a lead member of President Trump's Coronavirus Task Force, Dr. Fauci expressed only a bit more concern. While talking about a troubling new phase he called "community spread," he still argued that there was no need for Americans to change their lifestyle at that time. By then, the stock market had already begun its precipitous decline, reflecting the growing public anxiety.

Things changed dramatically overnight, as signs of panic began to appear. A state of emergency was declared, as medical experts began predicting shortages of hospital beds, equipment, and personnel. Then came the evolving advisories. "Don't wear masks," the experts patiently explained, "They only give a false sense of security, and they're needed by our medical personnel." That recommendation was abruptly reversed in early April, when experts began advising everyone to wear some sort of mask – even if it's homemade. There were some early predictions that the virus would leave 240,000 American fatalities in its wake. That was later revised down to 60,000.

And every new contradiction was announced with the same air of confidence we've come to expect from medical experts. Then again, confidence goes hand-in-hand with credibility, and no self-respecting expert can get very far without it.

But this is not a criticism of medical professionals or of experts in general. It's a simple reminder that no human being is infallible.

Unfortunately, many of our elected officials didn't seem to grasp that fact. Either that, or they were oblivious to the concept of unintended consequences. At federal, state, and municipal levels, they began shutting down government facilities and schools. They ordered restaurants and other private enterprises closed. The jobless rate skyrocketed, and our booming economy collapsed. Governors shut down entire states, and for the first time in our history, Americans were not permitted to attend religious services.

Across the country, church leaders were cited for holding Easter services in defiance of stay-at-home orders. In a surrealistic twist, that defiance was called "dangerous" by local officials, who somehow didn't see the implication of suppressing that most sacrosanct right guaranteed by our Constitution.

Throughout our history, we've endured dire situations during which some of our individual liberties were repressed. It happened during the Civil War, when Lincoln suspended habeas corpus. It happened again during WWII, with FDR's internment of Japanese-Americans. But the current sweeping suppression of our constitutionally-guaranteed freedoms, based on not much more than expert opinion, is unprecedented. And its impact on our economy has been catastrophic.

Doctors told our elected leaders that infectious diseases can't spread if there's no one to spread it. From their perspective, a total lock-down was the optimal solution. That's what they got.

And while most of our leaders reluctantly issued shutdown orders, earnestly believing they were necessary for public health, some less scrupulous politicians viewed the pandemic as a chance to implement radical political change – in welfare programs, prison release programs, border policies, even our nation's election process. Others seemed to relish the situation as an opportunity for endless hours of public exposure.

As these radicals wrangled for their small-minded political projects, they seemed oblivious to the nearly 25,000 deaths and the economic hardship the virus brought to America.

Only a few months ago, we were decrying the economic collapse in Venezuela. "That could never happen in a free, democratic society." Today, we're the ones scrambling to find toilet paper, and hand sanitizer is quickly becoming the new gold standard. That's not because of the virus, but because of how we've responded to it.

It's also ironic that many of those who are now looking to the medical and pharmaceutical communities to solve this problem were, just a few months ago, accusing them of contributing to the opioid epidemic – an epidemic that has killed more than 400,000 Americans over the past 20 years. But that was then, and this is now.

Without doubt, our government leaders need input from the medical professionals, but the professionals need to balance their advice with common sense, and more importantly, with the constitutional rights guaranteed to every American citizen.

Most Americans are responsible and want to be good citizens. They acquiesced to the shut-down because they were told it was the only way to stop the pandemic. We don't know if that extreme measure was truly warranted. We'll never know how many lives were really saved by shutting down the entire country, nor will we know how effective less drastic measures might have been. But the wanton disregard for our constitutional rights, based on models and theory, revealed just how fragile our freedom is. It's a chilling indicator of how easily a thriving economy and a free republic can quickly transform into something closely resembling totalitarianism.