Peter Lemiska
How much corruption will Democrat voters stomach just to defeat Trump? 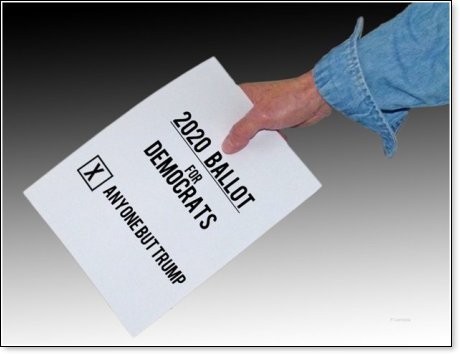 Looking at the primal rage and anti-Trump hysteria burdening Democrats these days, its hard to remember that just a few short years ago, they were alive, happy, and filled with boundless love. Yet there they were, metaphorically basking on the deck of some luxury ocean liner, with Barack Obama at the helm and the wind at their backs. Thrills occasionally ran up their legs when he spoke, and with Hillary Clinton poised to take command, their elation was assured for four more years and beyond.

On that fateful day in November 2016, their boundless love for Barack Obama quickly soured into a mindless hatred for his nemesis, Donald Trump. Democrats saw Trumps election as an insult to their most beloved president in modern times, and a real threat to his legacy.

So they did everything they could to destroy Trump and his presidency. They began with accusations of treason and collusion with the Russians, but that only ended with his complete exoneration, after a $32 million, taxpayer-funded investigation. They accused him of misogyny, xenophobia, homophobia, Islamophobia, and spent the last four years rooting around for shreds of evidence to support their claims  perhaps a misspoken word, a crude insult, anything that could be twisted and distorted to prove they were right. They branded him a racist because he supported strong international borders. They said he was hateful. They called him a vulgarian, after running out of their own vulgar epithets to throw at him.

And when none of that worked, Democrats took a growing scandal involving Joe and Hunter Biden, Ukraine, and a holding company, known as Burisma, and somehow managed to use it as justification to impeach Trump. Now, with the new evidence found on Hunters laptop, and despite efforts by the news media and social media to suppress it, more Americans are finally beginning to believe that Democrats got the wrong guy.

To objective observers, the Burisma scandal has always been a quintessential example of government corruption and influence peddling. Hunter Biden was paid tens of millions of dollars by a foreign firm, Burisma, which was under scrutiny by Ukrainian investigators. Hunters only qualification for his position with the firm was his relationship to then Vice President Joe Biden, who later boasted about using his influence to remove the prosecutor investigating Burisma.

The emails found on Hunters laptop have now disproven Joes absurd claim that he knew nothing about his sons business dealings. None of those emails have been refuted by the Biden camp. More troubling, though, is that the FBI was allegedly in possession of the laptop that incriminated the Bidens in December 2019, while Trumps impeachment hearings were in full swing. It almost sounds like Jim Comey, Peter Strzok, and all the others involved in the Russian collusion case, are still roaming the halls of the FBI, if only in spirit. It suggests that there may be much more to the scandal.

Even more disturbing is the investment deal Hunter had with the Bank of China, netting him, by some accounts, $1.5 billion dollars. Even the left-leaning website, Politifact, acknowledges that Hunter made an enormous amount of money through a murky deal with China during Joe Bidens vice presidency. It was around that same time that the Obama/Biden Administration was promoting better relations with China. In 2011, Biden made a number of conciliatory remarks at the opening of session of the U.S. – China Strategic and Economic Dialog. He called the United States and China two good friends. He said that a rising China is a positive, positive development, and that our relationship with China would be a key priority.

Even if Politifact couldnt find any specific criminal violations, there is an obvious problem: We dont know if the Obama/Biden policies with China were in any way linked to Hunters profiteering. If that were proven to be the case, it would have serious national security implications.

Democrat politicians have always shown an uncanny ability to project their own misdeeds and scandals on to the Republican Party, and theyve never let scruples stand in the way of their goals. When faced with a moral dilemma, they seem to gravitate towards pragmatism, rather than principle. But in the Burisma case, their chutzpah, their unmitigated gall is breathtaking.

Committed Democrat voters dont care about Bidens misdeeds, nor do they care about the many good things President Trump has accomplished for the country. They dont really love Joe, but they hate Trump with a passion.

All of this raises some interesting questions: How much more money would the Biden family rake in with Joe as president? Will Americas future be decided by hate and vengeance, or by objective reasoning? And just how much corruption are Democrat voters willing to stomach just to defeat Trump?