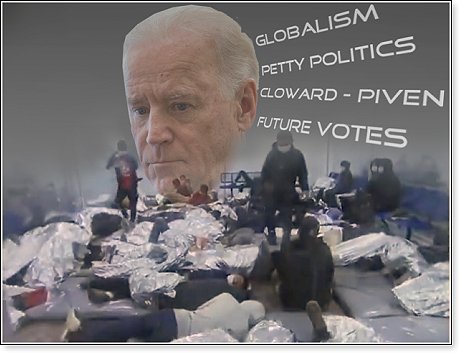 Watching the utter chaos on our southern border, its hard to believe that theres anyone who still believes in Joe Bidens open border policy. The small numbers who do, likely fall into one of two categories. Either theyve been convinced that he is acting out of compassion, or they are committed Democrats who support Biden regardless of what he does or why he does it.

Biden knows how to play the empathetic, compassionate angle, and he plays it well. Last month, he said he would never allow unaccompanied minor immigrants starve to death on the other side of our southern border  like his predecessor did. Of course, he was referring to Trumps extremely effective Remain in Mexico policy, which was simply an agreement by Mexico to hold U.S. asylum-seekers there, while their cases were adjudicated here. Bidens reference was intended to bolster his reputation for compassion, but it was actually a devious and disgusting distortion of facts. Most would call it an outright lie.

Someone once said that we would be ashamed of our good deeds if people could see all of the motives behind them. Why we do something – what motivates us – is often more important than the deed itself, so its important to understand exactly whats driving Bidens border policy.

Midway through the Obama/Biden Administration, several studies confirmed what many had long-believed – that the vast majority of new immigrants, especially those from Latin-American and Asian countries, overwhelmingly support the Democrat Party. Its no coincidence that the Democrats once-rational position on immigration began to shift around that same time. In fact, it shifted 180 degrees, and that wasnt because of compassion. It was callous, calculated politics, intended to capitalize on those statistics. It was, and remains an effort to drastically alter the voting demographics in America.

But other factors are also in play. None have anything to do with compassion.

And ever since Barack Obama declared himself a citizen of the world, choking on the term American exceptionalism, Democrats have become obsessed with globalism. The word global is mentioned in their 2020 platform some 70 times. As proud new citizens of the world, many of them see no need for international borders.

And theres something else that comes to mind, watching the border chaos.

In the mid-1960s, two anti-capitalist professors, Richard Cloward and Frances Fox Piven proposed a radical strategy for eliminating poverty and transforming America. Simply put, they thought if our prevailing welfare programs could be overwhelmed, they would collapse, providing an opportunity to replace them with a new system of guaranteed annual income for the disadvantaged. If that sounds familiar, its because many on the left are using similar language today. The current tidal wave of illegal immigrants, enticed by the offers of free healthcare and cash giveaways, along with the inevitable chain migration it will bring, will undoubtedly test the limits of our welfare programs. That is exactly what many Democrats want  another crisis, and another opportunity to fundamentally transform the country.

Bidens promises and policies have launched hordes of immigrants on treacherous journeys, only to face overflow conditions and absolute chaos, including reports of sexual assault, upon their arrival here. Thats not compassion. Along with the Democrats determined efforts to block their deportation, and the promise of eventual citizenship and voting rights, their true ulterior motives begin to surface.

The kids huddled under those foil blankets will eventually have a better life here, but at what cost to the citizens of this country? Along with those innocents, Bidens open border policy is allowing disease, drugs, criminals, gang and cartel members to flood across our border. In time, it will transform America  not into some Utopian society, but into another welfare state, infested with gang wars and narcoterrorism, just like the countries those immigrants left behind.

We can never know with certainty what motivates a man to do the things he does. Biden has tried to define himself as a compassionate, benevolent leader. But his callous disregard for the catastrophe hes created on our border and the impact it will eventually have on American cities, defines him as a cynical, self-serving politician  one who has abrogated his responsibility to the American public.