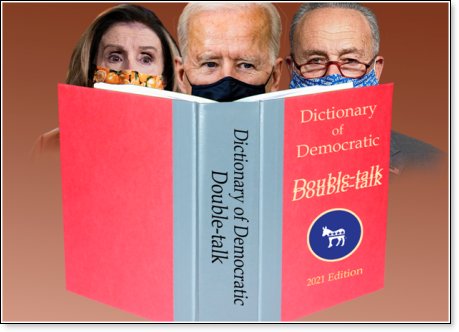 Todays Democrats seem to have a way with words.

They may have learned the power of word manipulation sometime around the turn of this century. Thats when they introduced to America a radical concept once considered outlandish. They couldnt have done it without redefining a single word, a word that, throughout recorded history, meant the union of one man and one woman. By changing the definition of marriage, they succeeded in bringing about a tectonic shift in Americas social mores.

That victory showed them what they could do by simply distorting the definition of words. It must have given them a sense of omnipotence, because today Democrats routinely reassign convenient definitions to words in order to influence public opinion and impose their radical agenda.

They couldnt allow the catastrophe on our southern border to make Joe Bidens new administration look foolish or incompetent, so they needed to redefine the utter chaos his policies have created. The word their linguistic team came up with showed true genius. Better than benign, its almost inspiring. Who, after all, doesnt like a real "challenge"?

And the word patriotic was once fairly well-defined. But Democrats have started fiddling with that word, too. Back in 2008, then-Vice President Biden told us that paying higher taxes was patriotic. Today he tells us that wearing surgical masks is a patriotic duty. Biden and the Democrats have grotesquely distorted the meaning of a word that was once associated with love of country. In todays Democrat doubletalk, its come to mean complete submission to arbitrary hygiene regulations, including social distancing, unending lockdowns, and surgical mask coverings. According to Democrats, their new definition of patriotic duty applies to everyone except, of course, the government officials who issue these arbitrary regulations, and all illegal aliens, to whom the American ideal of patriotism is meaningless anyway.

With an almost surreal irony, Democrats have even defined the destructive and costly anti-American riots organized by BLM and Antifa as patriotic. Yet when far less destructive mobs of angry political opponents overran the Capitol protesting election malfeasance, Democrats were quick to define that as an insurrection – an armed revolution against the United States.

It can all be a bit confusing for anyone outside Democrat circles, but thats the nature of double-talk.

One of the most creative and ambitious examples of their verbal gymnastics involves Bidens $2.2 trillion infrastructure plan. Since the bulk of this money is actually intended to fund the partys far-reaching socialist goals, and have nothing to do with infrastructure, they needed to alter another dictionary definition. They simply redefined infrastructure to mean anything mentioned in their bill.

Democrat leaders are not illiterate. Theyre not misunderstanding or misinterpreting the English dictionary. But theyve become skilled at redefining words to distort the truth and create credible lies  all to influence public opinion and impose their radical agenda. And they dont care if those lies redefine patriotic Americans – the ones who love their country – as seditionists. Nor do they care if they bankrupt our nation, already burdened with more than $28 trillion in debt.

Without question, the two most common words in the Democrat vocabulary, responsible for the most insidious and destructive lies, are the words racist and racism, which the Dems usually qualify with systemic. They falsely and maliciously use those words to define police policies, Americas judicial system, anyone who opposes the Democrats agenda, and virtually every facet of American society.

Their calculated manipulation of words is not intended to unite our country. Its intended as a self-fulfilling prophecy, an attempt to perpetuate racial division and upend Americas judicial system. Worse yet, emulating the classic tactics of socialist and communist nations, Democrats seem determined to cement their divisive and poisonous ideology into the minds of our children by making Critical Race Theory a part of the children's curriculum as early as kindergarten. That will only condition white children to feel guilt and shame, and fill black children with resentment and a sense of entitlement. It will restore institutionalized racism in America.

Martin Luther King knew something about the systemic racism that existed in America more than 50 years ago. He had a dream  one in which his children would be judged not by the color of their skin, but by the content of their character.

Todays Democrats have a different dream. They envision a racially divided, socialist state with a dependent, compliant populace. And as far as character is concerned, that word doesnt exist in their vocabulary.