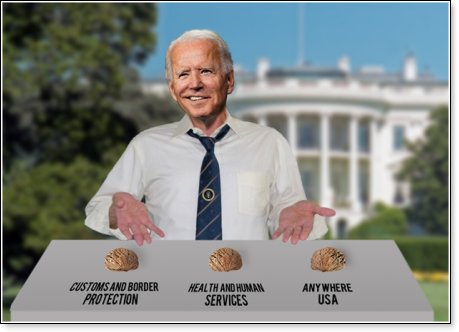 USA Today recently ran a lengthy article analyzing the challenges that President Biden faces as he deals with the immigration problem on our southern border. Written by an ensemble of well-respected journalists, the piece was entitled High-level chess: How Biden is navigating his relationship with Mexicos President AMLO. The article was accompanied by a photo depicting an intense, resolute Biden, obviously pondering his next move.

The whole package suggests to the reader that Bidens critics have been wrong about him all along. Chess, after all, is a challenging game requiring sound logic, mental acuity, thoughtful strategy, and keen insight  the kind of qualities we like to see in our leaders. The article strongly suggests that Biden is now tapping into those same skills to once-and-for-all resolve a long-term problem that has vexed several of Bidens predecessors. The writers seem to be in complete agreement with the Biden Administration as to the real cause of the current exodus from Central America: economic and social instability, made worse by the coronavirus pandemic.

Most of the article focuses on efforts by the administration to resolve those economic problems through cash payments. It mentions Kamala Harris pledge of $310 million in humanitarian relief and food aid for Northern Triangle countries and Bidens stated goal of $4 billion in aid over the next four years.

But it also addresses other obstacles Biden faces, including his shaky relationship with Mexicos president. And it talks about other root causes of migration surge, outlined by Harris  corruption and violence in the Northern Triangle countries. It goes on to explain how Joe Biden is well suited to solve this problem. After all, in 2014, as vice president, he ramrodded the Alliance for Prosperity Plan, a previous effort to stem illegal immigration through economic aid.

But the article fails to mention a report by the Council on Hemispheric Affairs, arguing that the Alliance for Prosperity Plan was an abysmal failure.

High-level chess does tiptoe around Bidens direct culpability for the border fiasco, briefly mentioning that Mexicos President AMLO joined Republicans in blaming Biden for this new surge. But it also reports that AMLO had a good relationship with our former president, suggesting that his opinion was no more relevant than Trumps.

Overall, the article portrays Joe Biden as a determined, competent leader, faced with tough, but not insurmountable challenges. Joes devoted wife, Jill, could not have written a more fawning analysis.

But that ensemble of well-respected journalists somehow failed to notice any connection between Bidens ceremonious elimination of Trumps effective immigration policies, and the simultaneous surge of migrants.

And there was no mention of other factors that put the blame for this situation squarely on Bidens shoulders. The writers never addressed Bidens magnanimous invitation during the third Democratic debate, If you want to flee, if youre fleeing oppression, you should come. Nor did they mention his 100-day moratorium on all deportations, or the virtually unlimited incentives Biden offers to illegal immigrants – including free healthcare, free housing and education, funded by the American taxpayer, as well as the promise of amnesty.

The writers never addressed the countless immigrants who told reporters they were coming to the United States specifically because of Bidens invitation, or the CBP Officers and local sheriffs who unhesitatingly blame Bidens policies for the surge.

And theres one more thing that the writers of this article failed to mention – the Stalinesque news blackouts by this administration used to conceal the magnitude of the problem.

Todays border crisis could have been avoided if Biden had simply left in place the policies established by his predecessor. As weeks pass with no effective action taken, its becoming clear that Biden has no interest in stemming illegal immigration. If that were his goal, he wouldnt have to play high-level chess with world leaders, hed only have to swallow his pride and restore Trumps policies.

Instead, hes decided to play a different kind of game. He has finally lifted the news blackout for the holding facility in Donna, TX. News photos reveal that the immigrant children, once packed in like foil-wrapped sardines are gone. The facility is nearly empty now, and the photos seem to confirm his latest claim – that his administration has now gotten control of the border crisis.

It sounded like good news, until we learned that those hordes of immigrants, many infected with the COVID virus, have simply been transferred to new facilities under the control of Health and Human Services, or to parts unknown throughout the country. Bidens solution was not to stem the flow of illegal immigrants, but to expedite their release to American communities.

Biden is playing a game today, but this one requires a completely different skill set, one thats particularly suited for this president. It requires slight-of-hand, cunning, and chicanery. It also helps if the player believes hes infinitely smarter than the marks hes targeting. Joe Biden isnt playing chess with international counterparts. Hes playing the shell game with the American people, and if they dont pay attention, they will lose the country.