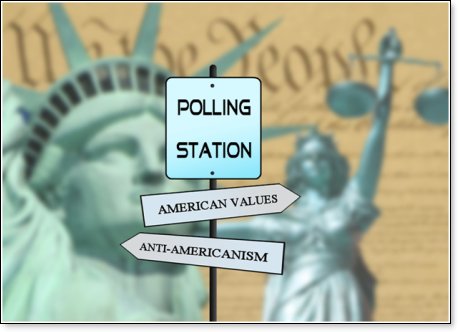 Today’s voters usually think of our elections as political contests between liberal and conservative visions of America, often contentious, but still always consistent with American values. In recent years, however, as our political rhetoric has become more heated and the rancor more bitter, politicians and pundits started labeling every election “the most important in history” – a vote for the very soul of America.

Now, almost overnight, we’ve witnessed historic changes in our country. Many of those American values and fundamental rights we’ve always taken for granted have come under attack.

When Covid-19 arrived, some politicians panicked. Out of fear, they overreacted. But others actually saw the pandemic not as an emergency, but an opportunity to change America. They responded by abrogating the basic rights of American citizens. They arbitrarily closed schools and places of worship. They outlawed peaceful assemblies of any kind, required all citizens to wear facemasks in public, and forced them to submit to vaccines that politicians, themselves, had denigrated just a few months earlier. They promised that their mandates would be short-lived, but repeatedly extended them for what seemed like an eternity.

When out of the public eye, those same politicians ignored their own arbitrary decrees, knowing they were virtually useless. At the same time, they revealed a true lack of concern over the virus itself, by infusing American communities with millions of unvaccinated, unscreened illegal immigrants. Their lockdowns did nothing to mitigate the mortality rate. Per capita, Covid deaths were higher in this country than in Sweden, which had a much less stringent response to the virus. It tells us that the suspension of our basic rights was not only wholly unjustified, but mostly ineffective. More than that, it set the stage for the economic and social disasters we’re dealing with today.

But just as threatening to our freedom is the growing censorship by the news and social media. Leading up to the 2020 election, the media suppressed a major story incriminating the son of a presidential candidate and, most likely, the candidate himself. Their biased and tainted reporting likely altered the outcome of that election, and saddled our country with most of the problems we now face.

Now, in defiance of our Bill of Rights, the federal government is joining the censorship business. A new government entity, designated the Disinformation Governance Board, has been established under the Department of Homeland Security. Ostensibly, this new board is tasked with standardizing the DHS response to so-called disinformation. We’ve seen what a biased news media can accomplish, and we’ve seen how effective government propaganda has been in authoritarian countries. The last thing America needs is state control over free speech.

It’s not just our freedom of speech, freedom of religion, and other basic liberties that have come under siege. So many other American values have been crumbling before our eyes.

We’ve watched the concept of equal justice vanish as crime rates escalate across the country. Progressive prosecutors and antipathy toward peace officers are turning America into a lawless, third-world country. All this, while the powerful treat Lady Justice as their personal instrument of retribution.

We saw easily manipulated zealots follow radical agitators onto streets across America, rioting over fabricated injustices. We were dumfounded and disgusted when they began to frantically tear down random historic monuments. Now they’re invading our churches, attacking our cherished freedom of religion, and freely violating federal statutes by protesting at the homes of Supreme Court justices. They envision themselves as champions of women’s rights, but what they’re demanding is the right to kill more unborn babies,

And those responsible for protecting our borders have instead opened the floodgates. Defying our immigration laws, they allowed more than two million foreign nationals to cross into our country illegally. Then they took the limited resources needed to feed America’s children and diverted them to families who have no right to be here. And if they seem overly confident during their congressional testimony, it’s because they know they’re free to lie under oath with utter impunity.

America’s decline is apparent in so many other ways.

There are the record-high gas prices and soaring inflation, the deep division in our country, and the force-fed racial animus.

Our children and young people are being taught to see America as a greedy, imperialistic country, infested with systemic racism. So national pride, the glue that holds a country together, is eroding before our eyes.

Our founders wrote of unalienable rights bestowed on us by our Creator. Now, elements within our country are demanding other rights that have nothing to do with our Creator – like the right to free education, the right to silence opposing views by any means necessary, and the right to murder unborn children at will. Those aren’t, nor could they ever be construed as God-given rights. Nor do they remotely resemble the rights guaranteed by our Constitution.

In the 2020 election, voters were deceived by politicians and the media. They believed that the man they were electing was a uniter, who would bring dignity and decorum to the White House. But now they’ve seen what happens when a feeble president bends to the will of the radical elements in his party. A new NBC poll reveals that 75 percent of Americans now believe we’re on the wrong track. That includes voters across the political spectrum. Only they can stop America’s disintegration by electing rational lawmakers who will stand up to this president’s radical agenda.

This upcoming election is not about liberal vs. conservative ideas. It’s a contest between anti-Americanism and American values. This time, it is a vote for the soul of America.