June 26, 2009
A concerned patriot wrote me the following: "...our Tea Party efforts are taking a weird turn. As you know the April 15th nationwide rallies were a BIG success! The issues were Runaway Federal Spending and lack of primarily, the Federal Government doing what is best for the people.

"...we are receiving direction to turn our focus to the Local Cities, Counties, and School Boards and not to focus on National issues.

"This is not what started the Tea Parties and in my opinion is not where we should be going as a 'Grassroots' group."

The following is my reply. 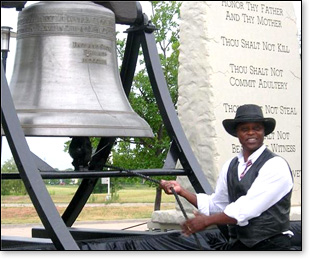 There is a saying that "all politics are local." In other words, national change starts at the local level. However, I don't believe national issues should be ignored. WE NEED TO FIGHT ON BOTH LEVELS! Also, I believe in following YOUR passion or calling. If national issues are your hot button, I believe that is where your efforts should go.

This incredible Tea Party Movement began by one man's passion, Rick Santelli, igniting the passion of millions. It is impossible to get everyone on the same page. Bottom line, people are FIRED UP TO MAKE CHANGE (local & national). And that is a VERY GOOD THING!

For example, I have heard criticism of the folks pursuing the issue of Obama's eligibility to even be president, him not producing a birth certificate and etc. Critics say, "It's a lost cause and a waste of time." Well quite frankly, I have little respect for folks who give up simply because others disapprove or "don't get it." People called Dr. Robert Schuller crazy when he said he wanted to build a glass building in earthquake country. Today, the Crystal Cathedral is one of the wonders of the world. To the folks passionate about this issue, I say, "Go For It!"

Folks, we are all on the same team. Let's not allow turf wars or petty disagreements to distract us from our ultimate goal to Take Back America! Patriots are needed in all areas. We are blessed with great minds on our side. If each person follows their gifts and passion, stay respectful and united, WE WILL WIN! We The People! God bless, Lloyd