Lloyd Marcus
You're a racist! The ultimate emotional intimidation

August 21, 2009
I am on the email list of a dear black friend of 20 years. He is a minister, writer, and professor. He has mentored and advised me with great wisdom on numerous occasions. With me being a black conservative Republican and he a Democrat, we avoid talking politics. Since the election of Obama, my friend will talk about nothing else. He is in Baltimore. I'm in Florida. Every time he calls me, he turns the conversation into trashing all who oppose Obama's agenda. Thank God for caller ID. 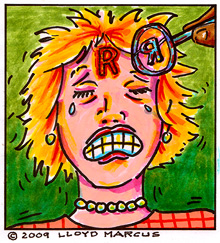 I received a mass email from my friend in which he vilifies the Christian community for not chastising ministers who speak against Obama and for not attacking Sarah Palin. He said the Republicans used Palin as their "attack dog against Obama." He said watching a McCain/Palin rally was like watching a KKK lynch mob and he personally heard the crowds yelling "kill him," referring to Obama. Folks, my dear friend is a liar.

In 2008, I traveled the U.S. attending forty rallies on the national "Stop Obama Tour" with Our Country Deserves Better PAC. Not once did I hear any violent or racist comments. Seeing through his smooth speeches and charisma, people were simply terrified of what was to come with an Obama victory.

Behind all of my friend's intellectual yada, yada, yada festers a deep hatred for the rich and white people. In a conversation, he said with great glee that Obama was going to "reign in Wall Street" and CEO's salaries should be limited to $500,000 per year. I thought, "Who the heck are you to dictate how much someone should be permitted to earn. This is America. The sky's the limit."

Anger caused me to write a passionate reply to my friend's hate-filled email. I stated numerous reasons why Obama's agenda and the health care bills are wrong for America.

Included was abortion. Fifty percent of black babies are aborted (BlackGenocide.org). Also, Obama voted three times against protecting babies who survive an abortion. So, how does my black minister friend justify supporting Obama. And why does he consider anyone opposing Obama's policies non-Christian, racist, or an Uncle Tom if you are black?

Ready to hit "reply all," I remembered the White House requested all emails against ObamaCare be forwarded to them. I thought, why give them more ammo to attempt to shut me up? The folks on my friend's liberal email list are all infected will Obama Brainlock Syndrome. They do not want to know the truth. In the current climate set by our "I'm gonna make you a Health Care offer you can't refuse" president, I could be setting myself up for physical attacks.

Many sincere white Americans thought by electing a black president, America could never again be characterized as a "racist country." Shamefully, this characterless administration betrayed Obama voters by exploiting race, using it as a tool to implement their far-left agenda. If you don't agree with everything Obama wants, you must be a racist. Rather than the election of America's first black president bringing the races together, Obama's administration is tearing us apart. They will continue to play the tired, old, and tattered geriatric "race card" as long as it is effective.

Folks, please, please, please do not fall for it. The stakes are far too high. Boldly speak the truth and stand up for what you know in your hearts to be right for America. Obama wants to redistribute wealth, punish achievers, decide who lives or dies, and control as much of our lives as possible. It is just that simple. He must be stopped. Do not allow yourselves to be manipulated and intimidated for fear of being called "racist."

Ironically, "Black Racism" has blinded my long-time friend as well as many other black Americans from seeing beyond Obama's skin color. MLK would not be proud.