September 30, 2009
It is always too soon to give up, cut your risk, throw in the towel. You never know what tomorrow will bring. The morning I arose to discover Obama won the presidency, I was depressed. I knew this liberal was wrong for America. Only my faith and trust in God revived my positive mindset. God did not wake up and say, "Oh no, Obama won!" Though I did not understand nor could I see His divine purpose, I said, "All is well." 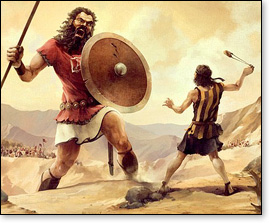 Little did I know that Obama's aggressive implementation of his far-left radical agenda would so terrify and infuriate the American people, it would awaken a majority who have been silent for far too long. One could say Obama's election was a blessing in disguise. Think about this folks. The passionate rebuke of Obama's agenda by one man, Rick Santelli, inspired millions to rise up to take back our country. Incredible!

Then there is ACORN, the Evil Empire, given authority to conduct the U.S. Census. With numerous voter fraud lawsuits against them around the country, this is equivalent to letting the fox into the hen house. This corrupt organization, which played a prominent role in getting Obama elected, was scheduled to receive billions in his stimulus package. Frustratingly, we, the people, were powerless to stop them.

Miraculously, like David and Goliath, who could have ever imagined that two kids dressed as a pimp and hooker could bring ACORN down?

This is why it is crucial to never give up, trust God and keep the faith. So, hang in there folks. As the song says, "The sun will come out tomorrow."