October 5, 2009
Is God back? While watching the Glenn Beck program, three women  yes, I said three  boldly proclaimed their Christianity and how their decision to follow Christ has affected their politics. Other than religious programs, people do not talk about their faith on TV without being portrayed as fanatics or nut cases. It was truly refreshing. Could this mean God is back from exile from the public square? 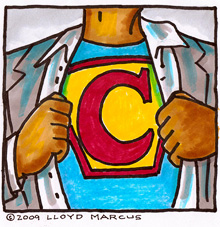 Another Beck show guest was a black man, Charles V. Payne  founder, CEO, and Chief Analyst of Wall Street Strategies. Payne shared his moving tale of growing up in a poor inner city neighborhood. He said his fellow black students beat him up daily for "speaking too white," getting good grades, and daring to have a dream of becoming a businessman. "The kids were not simply jealous of me, they were extremely hostile," said Payne. He attributes the black students' negative attitudes to a victim and entitlement mindset instilled in them by liberals.

I thought to myself, "Wow!" Black people do not come on TV and tell the truth about the negative effects liberalism has had on the black community. Nor, does anyone hold blacks accountable. Blacks are victims. Every and any problem they could possibly have is the fault of rich, racist, conservative, white Republicans. I mean, everybody knows that!

And then there is the hyphenated American thing. I have shared with you that while I was performing on the Tea Party Express Tour, I opened the rallies by saying, "I am not an African American. I am Lloyd Marcus....AMERICAN!" The audience erupted with applause at all 34 rallies. This hyphenated American thing is like the fairy tale The Emperor's New Clothes. It appears most Americans dislike hyphenating. However, enslaved by political correctness and a desire to appear enlightened, sensitive, and educated, everyone simply went along with the program.

In the Emperor's New Clothes, con artists convinced the Emperor that the invisible fabric they used for his new attire was so special that only the most enlightened could see it. At the public unveiling, the Emperor proudly paraded down the streets in his new outfit while supplicants applauded its great beauty. Then a little boy yelled, "Mom look, the Emperor is NAKED!" Suddenly everyone, including the Emperor, was forced to acknowledge the truth. Like the little boy in the story who spoke the truth, my public rejection of hyphenating is liberating Americans across America. I am inundated with letters of thanks and support.

Something unexpected and wonderful is happening across America, folks. The Tea Party Movement has awakened a powerful sleeping giant silent majority. Americans are starting to say "no" to political correctness, "no" to banning God from the public square, "no" to politicians who ignore the will of the people, "no" to secular progressives, and "no" to dead beats who think they are entitled due to their skin color, sex, economic status, or whatever. "Enough!" is the battle cry of millions of Tea Party protesters.

While the main focus of the Tea Party Movement is a rebuke of outrageous government overreaching and out of control spending, the movement has embolden patriots to stand up for the traditions, institutions, and values which have made America great. Thus, their slogan, "Take Back America!" It is truly amazing to witness.

With kids having to walk through metal detectors to enter their schools, fatherless black male students dropping out at epidemic rates, kids brutally physically assaulted by other kids on schools buses, and middle schools having to install Day Care centers to accommodate the large numbers of children having children, perhaps the libs will allow prayer back in schools.

Nah... that will never happen. According to the Left, letting God back in schools would really screw up our kids!