October 15, 2009
They did it to Rush Limbaugh. Who will be next? I am sure Al Sharpton, Jessie Jackson and others on the Left are struggling to contain their overwhelming feelings of glee and power. They did it! Their campaign of lies and slander portraying Rush Limbaugh as a racist achieved its goal. Rush was dropped from a team bidding to purchase an NFL football team. 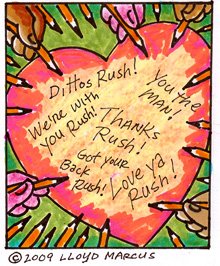 Rush's dismissal is a victory for political correctness, despicable reporting and high tech lynching. No need to fact check racist accusations against Rush, although a few researchers have pursued and failed to find the alleged racist statements. When it comes to Conservatives, the Left hangs them simply because they are Conservative.

The Limbaugh Incident has surely emboldened the Left to heighten their attacks on Conservatives. I wholeheartedly support Rush's decision to pursue legal measures to punish his slanderers . "The only thing needed for evil to triumph is for good men to do nothing", Edmond Burke.

In the movie Pale Rider, a powerful bully using his many thug enforcers was attempting to steal land owned by humble prospectors. When Clint Eastwood, the pale rider came to town, he gave the prospectors courage to fight for their land. But Eastwood warned them, "Some of you are going to die". And there lies the rub, to live in tyranny or risk all fighting for freedom.

Folks, we face a similar dilemma in America today. The Left killed Rush's dream of owning an NFL team. A liberal media lynch mob drug Rush's dream out into the public square and hung it by the neck until it was dead while the likes of Sharpton and Jackson laughed and cheered celebrating their victory.

Like the prospectors in the movie, if we do not fight for our freedom, we deserve to continue suffering under the tyrannous rule of political correctness. The Left keep beatin' up patriots on our side and getting away with it; Clarence Thomas, Sarah Palin, Carrie Prejean and many others. Our latest causality is Rush Limbaugh. I say, "Enough!"

We Conservatives realize this attack on Limbaugh is really an attack on us all. It is time we draw a line in the sand. We must not "go gentle into that good night". Our side has brilliant minds and logical thinkers. By nature, we Conservatives do the right thing even when it is difficult, rather than making cowardly liberal choices based on feelings. It's called having a back bone and true compassion.

So, I ask you. How can we fight back? Do we need a Pale Rider Clint Eastwood type to lead the way? I think we have one. His name is Rush Limbaugh.

While the liberal media found Rush guilty of racism without evidence, his real crime is being a Conservative. I am a black man inspired by Rush to verbally confront liberals, "Do you feel lucky today, punk...well, do ya?"

We are so very sorry about what the scruple-less liberal bias conservative hating media have done and are continuing to do to you. While we realize you are a big boy and can handle it, you are still a human being. This international personal attack on your character based on such absurd charges has to be extremely painful.

We, your 20 million plus loyal fans are outraged. You have our total support.

Rush you have made us a family. For 20 years you have given us and continue to give us comfort, hope and peace when things have looked their darkest. Together, we have overcome and survived numerous challenges over the years. I still remember the joy I felt hearing your voice again upon your return to the airways after going through rehab. Again your critics gleefully thought they had destroyed you. But they don't get it. Rush Limbaugh is bigger than Rush Limbaugh.

Not only do you have talent on loan from God, like the Blues Brothers, you are on a mission from God. It is impossible for the godless Left to comprehend that no man can bring you down. When God decides you have fulfilled His purpose, (everyone on the planet agrees with you) (smile), He will let you rest. Until then, you are His guy and our guy. So hang in there my brother. Thanks for being you. We love ya man!