August 12, 2011
Are you folks as sick of reading my articles on this topic as I am writing about it? Just as Ronald Reagan said to Jimmy Carter during the 1980 debate, I say to the NAACP, "Well, there you go again" — more distortions, lies and tired old "we shall overcome" 1950's rhetoric. 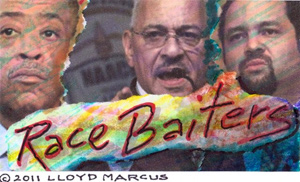 Tragically, this once-great organization has been hijacked by far-left, radical, America hating socialists. Thus, the NAACP is relentless in their efforts to portray American race relations as having progressed very little since the 1950's, ignoring obvious evidence to the contrary — a black first family occupying the White House.

The NAACP's modus operandi is simple, a one trick pony. Their strategy is to despicably declare every issue and all opposition "racist."

Along with their daily attempts to brand the tea party racist, here is the NAACP's latest attempt to use race baiting to get out the black vote for Obama in 2012.

Rev. William Barber, president of the NAACP's North Carolina conference, said, "We must fight against any attempt to segregate, isolate and steal the black vote." This is a perfect example of tired old "we shall overcome" 1950's rhetoric. Who on earth is stifling the black vote? If such an initiative were true, wouldn't the Obama-worshiping media be all over the story? So, what the heck is this race-baiting preacher talking about?

Rev. Barber's statement is nothing more than tried and true words guaranteed to evoke a knee-jerk hateful response in brain-dead black racist ideologues.

Rev. Barber is responding to states demanding that voters show proper ID, which, surprise, surprise, the NAACP has deemed to be racist.

Can someone please explain to me how requiring voters to confirm they are who they say they are, live where they say they live, and are a U.S. citizen has a racial component?

I do see a racial component from the NAACP's point of view. They are, in essence, saying blacks are too stupid to find their way to the DMV and other places to acquire legal ID. One could argue, if blacks are that stupid, why on earth should they be allowed to vote?

I'm being sarcastic, but you get my point. These so-called advocates for blacks and other minorities do a tremendous disservice to the very people they claim to care about. Imagine the negative impact on your self-esteem when you are constantly told you do not measure up and need standards lowered in order to be successful. The left sends this message to blacks all the time. This is called the Bigotry of Low Expectations.

I have also noticed how the NAACP and others on the left use the Black Church and black ministers to sell liberal political candidates and their socialistic agenda to Black America. This is particularly hypocritical and obnoxious considering the left's disdain for all things Christian and their banning of God from the public square.

Courting the black vote, Hillary Clinton ran to the black church during her presidential campaign. Hillary transformed herself in an instant into Rev. Soul Sista Clinton. Evoking her best attempt at a black dialect, she orated, "I ain't no wheres tired!" The all-black congregation erupted with applause.

Imagine what would happen to a white Republican attempting to sound black while addressing a black congregation. Boys and girls, can you say politically tarred and feathered?

"Can you believe that cracker trying to sound black" would be the outcry of outraged black parishioners.

As a life-long black PK (preacher's kid), I know from whence I speak when I say ministers are held in the highest regard in the black community. This is why I find it quite despicable every time the left uses black ministers to "herd" blacks into the direction of their socialistic agenda. This tactic is an ungodly betrayal.

Rev. Barber, Rev Sharpton, and Rev. Wright, to name only a few, are nothing more than Liberal Plantation overseers and Black Civil Rights Mafia enforcers — punishing any black who dares to display independent thought, success via conservatism, and love for their country.

Black conservatives such as myself are vilified as traitors to our race and even threatened with bodily harm. More often than not, driven by our faith, our goal is to liberate follow blacks from self-induced limitations. We strive to open black America's eyes to the reality that they are extremely blessed to have been born in America, the greatest land of opportunity on the planet for ALL who choose to go for it!

Meanwhile, the NAACP and certain so-called black men of God are doing severe damage to their flock. Make no mistake about it, selling racial hatred blended with victim and entitlement mindsets is poison — an anathema to the human spirit, individual success, and happiness.

Don Corleone in "The Godfather" movie cautioned his son Michael to expect an attempt on his life. The experienced old father added that his son's enemy would use a dear longtime friend as the betrayer.

This same scenario is happening in the black community. The left is using the black community's dear longtime friends to betray them: the iconic NAACP and the highly esteemed black ministry. They are infusing black American with racial hate via race profiteering to sell their anti American socialistic agenda.

Despite their rhetoric, much of the modern day civil rights movement ceased being about black empowerment and freedom many moons ago. Their once noble movement has become all about power and control, which is extremely unfortunate.