August 15, 2011
Due to Obama's declining poll numbers, Democrat tongues loosened by cocktails at parties are quietly suggesting, "Wouldn't it be wonderful if we could primary Obama out with Hillary? Darn it, we can't because Obama is black!" 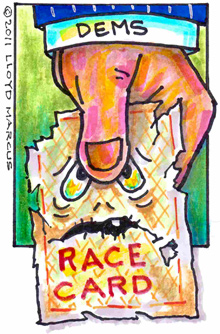 Almost three years ago, the Democrats offered their equivalent of a Trojan Horse to America in the form of a shiny, new, extremely well-crafted, beautiful black man. Its mega-internal speakers broadcast a hypnotic message, heavily reverbed to create a godlike effect and looped 24/7, promising "Hope and Change."

Democrats were elated by their good fortune.

Obama would be the key to implementing all of their liberal-academia, utopia-producing theories, his black skin insulating him from any and all opposition. Oppose Obama? You're racist!

The Democrats keep their R-for-racist branding iron red-hot and ready to apply swift retribution to any feisty, uppity conservative or Republican who dares challenge Obama.

Basking in their tactical genius, Democrats thought, "We did it! We pulled off the perfect exploitation of race to implement our socialistic agenda — a liberal black man in the White House." Someone at the DNC even broke out their old Commodores record as they partied: "Ce-le-brate good times, C'MON!"

As America slept, one night under the cover of darkness, a hidden door in the ebony idol opened; out rushed an army of vicious liberal minions, freedom-killing mandates, and socialistic policies. Their mission: destroy our capitalist system and massacre America as we know it.

Totally unexpected and to the horror of the Democrats We The People rose up. Patriots, via divine inspiration, formed the Tea Party. Patriot freedom-fighters began winning skirmishes around the country — governorships in New Jersey, Virginia, and Florida — and defeating the tyrannous teachers' union in Wisconsin, to name a few. We took the House. We will take the Senate and are predicted to take the White House in 2012.

The Democrats' ebony idol, their so-called gift to America, has been exposed for the fraud it truly is — a hollow, soulless shell of empty liberal ideology, its internal recorded message malfunctioning and distorted, stuck repeating the phrase, "I blame...I blame...I blame..."

Seeing the handwriting on the wall via polling, the Dems wish they could abandon their disastrous ebony race card for Hillary, their gender card.

But alas, they cannot. After spending the last three years, assisted by their media minions, convincing Americans that any and all criticism of or opposition to Obama is racist, Democrats find themselves victims of their own trap. Fearing the repercussions, Dems do not dare display the slightest abandonment of Obama. I love it! They who live by the race card die by the race card.

Despite the media's relentless attempts to brand us otherwise, the Tea Party has never been about race. Our focus and sole desire have been to uphold the Constitution and restore our freedom, liberty, and culture. The Tea Party's goals are much higher than the Democrats' bottom-feeding agenda of exploiting race for political gain. This is why it is so sweet that they are stuck with their loser black candidate.

You leftists, do not try to spin my comment as being racist. I, along with millions of my white Tea Party brothers and sisters, would gladly cast a presidential vote for blacks such as Herman Cain and Col. Allen West in a heartbeat. So don't even go there.

Ironically, the Democrats who claim ownership of Dr. Martin Luther King, Jr., shamefully dishonor his dream. The Tea Party, vilified by the Democrats, fully embraces MLK's dream by judging and selecting their candidates by the content of their character rather than the color of their skin. Thus, the Tea Party, much-hated by Democrats, is the realization of MLK's dream. And for the record, MLK was a Republican.

The Democrats played the ultimate race card — an incompetent affirmative-action president, and now they are stuck with him. The faux finish on their once-shiny ebony idol is rapidly deteriorating, peeling off daily. Come 2012, Obama is a sure loser. "Ce-le-brate good times, C'MON!"