Lloyd Marcus
Time for the American people to demand an apology

May 21, 2013
Enough! For many years, the American Left has and continues to shamelessly abuse the American people; slandering, beating up and bullying them into submission by using the easily proven false narrative that America is a racist nation. In other words, the Left recklessly and unfairly plays the Race Card. 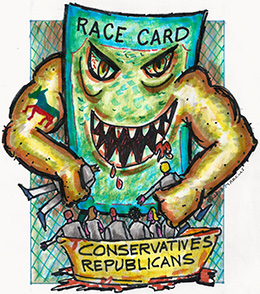 Why? The Left has great disdain for traditional American values and desires to transform America into it's dreamed Socialist/Progressive utopia. Calling an opponent to the Left's agenda "racist" typically frightens and shuts them down.

On behalf of my decent and hard-working fellow Americans, I demand an apology from the NAACP, the Congressional Black Caucus, the Democratic Party, Hollywood and the Mainstream Media. All of these self-proclaimed paragons of fairness and compassion are nothing more than liars; peddlers of hate and division. Each entity that I named is a cheering section and advocacy group, assisting the Left in the furtherance of it's socialist/progressive agenda.

Somewhere in America's recovery from the sin of slavery, the Left hijacked our well-intentioned Christian desire to achieve racial equality. The Left redefined "racial equality" to mean that minorities are never to be held responsible for their actions; minorities are entitled to endless government hand-outs via government confiscation and redistribution; opposing a minority on any issue is regarded racist and hateful.

O.J. Simpson's attorneys successfully played the Race Card, changing the subject from Simpson murdering his wife. Baby murderer, Dr. Gosnell's attorneys said his trial was about racism against a black doctor trying to help the poor. The Left is claiming that America's outrage over Obama's three scandals (IRS, Benghazi and AP) is rooted in racism against a black president. Whenever behavior by a black is indefensible, the Left plays the Race Card, expecting it to trump facts, truth, justice and logic. Innocent whites typically run to the tall grass fearful of being devoured by the all-powerful and all-consuming Race Card.

The Left plays the Race Card with impunity, intentionally attacking opponent's First Amendment right to free speech. Victims of the Left's unmerited use of the Race Card include Conservatives, Republicans and low-info voters – deceived to hate non-existent enemies; their brains infected with propaganda and misinformation.

Hollywood: Hollywood is notorious for promoting leftist agenda lies to low-info voters. For example: in a movie I was watching, actor Ice Cube delivered this line, "Tell the NRA to stop killing black people". I stopped the DVD and threw the stupid piece of crap propaganda movie into my trash-can. The NRA does not target or kill black people. The irresponsible producers of this film spread their hateful lie to millions falsely accusing and slandering the NRA which simply defends our Second Amendment right to bear arms. Informed black leaders praise the NRA. http://www.youtube.com/watch?v=9RABZq5IoaQ

The NRA deserves an apology.

Congressional Black Caucus: Rep Andre Carson said the Tea Party movement would "love" to see black Americans "hanging on a tree." http://fxn.ws/oNpeR0 How outrageously inflammatory and hate-inspiring is that? But most of all, it is a despicable lie. As a black conservative having attended over 400 tea party rallies on numerous national tours, I have only encountered being loved to death. Rep. Emanuel Cleaver said a tea party protester spit on him. A tea party group offered a $15,000 reward for proof of the spitting. No one has claimed the reward. http://bit.ly/16Cw16v

CBC members claimed being called the n-word 15 times outside of the U.S. Capitol by tea party participants. Breitbart offered a $100,000 reward for proof of the incident. The reward has not been claimed. http://bit.ly/10IDDNv These are only a few of many lies the CBC has told about the tea party. The Congressional Black Caucus owes the Tea Party an apology.

The Democratic Party: U.S. president Jimmy Carter said opposition to Obamacare is motivated by racism against a black president. http://www.foxnews.com/story/0,2933,551503,00.html

Democrats have declared that disagreeing or opposing Obama on any issue is racist. Remarkably, the Dems expect us to ignore Obama's unprecedented usurping of power over the private sector and his routine unlawful trashing of the Constitution. Think about that folks. For the first time in U.S. History, we have a president that non-submission to his will could destroy you. Constitutional patriots deserve an apology.

Such allegations from liberal MSM hacks are absurd and bogus. Let's get real. Obama is the first Affirmative Action president; exempted from the traditional vetting process for one seeking the highest office in the land. Millions of white Americans could hardly wait to pull the level for America's first black president; 40% now attend tea parties. Poor things...they naively thought electing Obama would relieve them of ever being called racist again.

Blacks are only 12% of the U.S. Population. So it took a whole lot of white votes to put Obama in the White House – two times. White America deserves an apology.

I am only one voice crying in the wilderness. Still, I feel compelled to shine the light of truth on how the American Left continues to abuse the American people via the unfair playing of the Race Card; solely to manipulate Americans into embracing an agenda contrary to that of our Founding Fathers.

John Adams said, "Our Constitution was made only for a moral and religious people." Such is who we are as Americans. Ironically, the Left uses America's morality against her by playing the Race Card; with great success. Despicable.

My fellow Americans, you are a great people; non-deserving of the abuse you have suffered from the Left. You deserve much better. Don't hold your breath, but the American Left does own you an apology.