October 29, 2018
Those who doubt President Trump's claim that the media have stirred up "great anger in our country...by inaccurate, and even fraudulent, reporting of the news" should consider a vivid distortion of the truth the media got away with in June.

Following the G7 Summit in Canada, a photo was widely circulated that showed President Donald Trump being "stared down" by Germany's Chancellor Angela Merkel in a "tense" room full of world leaders.

At least, that's what the headlines and commentary told us, and many of us believed it. After all, a picture is the best kind of propaganda. 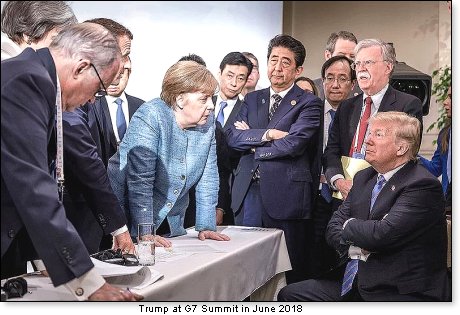 When I first saw the picture, my eyes naturally focused on what I was told to see — the unforgettable image of a seemingly exasperated Merkel bearing down on an aloof U.S. president — although I didn't believe the tension was necessarily as palpable as claimed by the media. About that time, I came across at least one commentator's observation that the "obvious" stare-down may have been more appearance than reality.

This week, I came again upon the photo while looking up something else and had occasion to study the picture more closely than before. With just a little analysis, I discovered how willfully mistaken the media were when they condemned Trump for being obstinate in dealing with global leaders over trade and tariff issues.

If you look carefully at the picture (especially the enlarged version in this link), you'll see that President Trump appears not to be looking at Chancellor Merkel at all, and this nullifies any claim of a "stare down." Instead, his eyes appear focused on the one world leader in the room who is engaged in conversation — French President Emmanuel Macron — who (though largely obscured) appears to be talking with National Security Advisor John Bolton. A close look at Macron and Bolton's faces reveals this to be true. Also, the way Macron's hand is placed on the table suggests he is intent on making a point to Bolton, and by extension, Trump.

Backing up this interpretation is the fact that Japanese Prime Minister Shinzo Abe, standing behind Merkel, appears to be looking directly at the real focus of attention: France's Macron.

Unfortunately, the figure standing next to Macron all but obscures the fact it is Macron, not Merkel, that Trump is looking at, and who is actually the focus of the encounter, not Merkel. All this seems obvious in the picture.

The mainstream media's misuse of the picture as an unflattering image of a seemingly insensitive Trump besieged by world leaders is not at all an accurate representation of the picture, and is merely what the media would have Americans naively believe. (To appreciate this fact, click here.) The media's misuse of the image turns out to be just another hit piece to file away under fake news.

Stephen Stone is the President and Editor of RenewAmerica – a conservative media site dedicated to restoring respect for America's founding principles.

This purpose includes not only respect for the Declaration of Independence and the Constitution, as written, but for the Creator and His laws.

From the time he was a teenager, Stephen has considered himself a born-again Christian, in the biblical tradition. Since then, he has devoted his life to pursuing life's questions and challenges through seeking to know the mind and will of God, and through seeking the sanctifying influence of His Spirit.

As a result, Steve has become somewhat of a religious philosopher – one committed to approaching the truth of any subject by the clear standards of God's Word.

His religious testimony can be found in "What does it mean to be converted to Jesus Christ," a position statement he wrote for RenewAmerica.

November 10, 2014
Will Obama be impeached now that Republicans control both houses of Congress?