Joan Swirsky
The march to nowhere

February 2, 2017
A day or two before the inauguration of President Donald J. Trump on January 20, 2017, I watched a reporter interviewing five attractive, intelligent, articulate women from California, who were all making the long cross-country trip to the Women's March on Washington on January 21st. 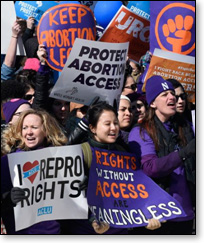 Amazingly, not one woman was able to express a persuasive or even rational reason for the trip, but instead resorted to time-worn platitudes, bromides, and leftist talking points about "unity" and "solidarity" and "getting the message out." Um...what message?

At the March itself, I was struck by the fact that women who pride themselves on their intelligence resorted to reading their statements, never veering a syllable off the scripts that were clearly written for them – scripts, by the way, that were not only boilerplate and banal, but shockingly blasphemous.

Madonna, punctuating her statement with foul-mouthed obscenities, looked down at her script, then lifted her head to speak into the microphone. "I'm angry." Pause. Again, she looked at her script, then read: "I'm outraged." (Very difficult lines to memorize, to be sure). Pause. Again, back to the script where she read about her fantasy of "blowing up the White House."

On and on and on they intoned and screeched and railed, sounding remarkably like barnyard creatures and giving the rest of America the distinct impression that the conceit these women harbor toward their superior intellects and evolved moral sensibilities are fantasies borne more of delusions of grandeur than of either objective IQ numbers or developed moral compasses.

But to be fair, they had genuine passion that inspired them to spend thousands of dollars to drive, bus, or fly across the country, pay for lodging and food, and then travel back to their homes.

Just kidding. We all know that left-wing activists are notoriously cheap, believers as they are that either government or other benefactors should pay their way.

And sure enough, according to Matthew Vadum's stunning article "Soros's Women's March of Hate," billionaire radical George Soros – the same man "who says Communist China's system of government is superior to our own and that the United States is the number one obstacle to world peace" – was directly involved in funding at least 56 of the March's "partners." 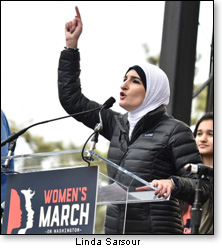 Vadum and others also reported that Muslim terrorist supporter Linda Sarsour, an advocate of Sharia law in America, was deeply involved in planning the March-related events. Sarsour, Vadum wrote, "has familial ties to HAMAS and works with the terrorist front group Council on American-Islamic Relations (CAIR)."

If you're not sure what Sharia mandates, here are just a few of the disturbing details, which include:
Also among the motley crew of attendees at the March was featured speaker Donna Hylton, a convicted felon who, along with several others, kidnapped a man and then tortured him to death.

Then there was Angela Davis, former Black Panther, former fugitive from U.S. justice, former VP candidate for the U.S. on the Communist Party ticket, and famous for her speeches praising American traitors, terrorists, and cop killers.

On hand, as well, were members of the radical – but ultimately discredited and ineffectual – groups Occupy Wall Street and Black Lives Matter.

Not to forget that most of the women at the March who vehemently objected to then-candidate Trump's interview with Access Hollywood's host Billy Bush – in which Mr. Trump talked crassly about the easy access rich and handsome guys like him had to women and how easy it was to grab them by the crotch – were thunderously silent when Bill Clinton was not only abusing and embarrassing his wife and spitting in her face for decades on end, but also being routinely "serviced" in the Oval Office by one Monica Lewinsky.

Funny how their moral outrage is always reserved for Republicans. But enough about leftist hypocrisy and the piles of debris they left for others to clean up after the March, not quite as bad as the gross mess Barack Obama's fans left after both of his inauguration ceremonies. What is it about Democrats and cleanliness?

So there they all were – the hysterical harridans of Hollywood and the music industry and the hate-America-firsters – along with ordinary women and their children, all of whom when interviewed also didn't quite know why they were there, but appeared to be perfectly okay with all those "F" words and women dressed up as the female sex organ.

Writer Vadum goes on to quote Asra Q. Nomani – a former Georgetown journalism professor and Wall Street Journal reporter who described herself as "a lifelong liberal feminist who voted for Donald Trump for president." Nomani wrote that "the march really isn't a 'women's march.' It's a march for women who are anti-Trump."

Nomani was right, but she didn't zero in on the animating cause of their rage.

The real reason behind the rally: Abortion 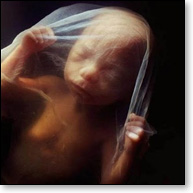 The Holy Grail of the left is abortion. There is not one subject – including ISIS beheadings, inferior public-school education, unaffordable healthcare, even child pornography – that is more important to left-wing women than unwanted pregnancies, i.e., ending the lives of inconvenient embryos.

But now that science and technology have evolved past the point when feminists like Steinem pronounced embryos "blobs of tissue," and everyone who views a sonogram can see the vital, heart-beating, active life of the developing baby, let's review what abortion destroys forever:


a. In the top layer, the neural tube begins to form, where your baby's brain, backbone, spinal cord, and nerves will develop. Skin, hair, and nails will also develop from this layer.

b. The middle layer is where the skeleton and muscles grow, and where the heart and circulatory system will form.

c. The third layer houses the beginnings of what will become the lungs, the intestines, and the urinary system.


All of this is miraculous and awe-inspiring. Still, left-wing women – and their cowed and sissified partners – insist that literally killing the baby they're carrying is more important than every other issue on earth.

That is why they ostracized – literally banned – any pro-life woman from their March, even feminists who agreed with them on this or that social or foreign policy issue. Bottom line: if the pro-life women didn't believe in killing babies in the womb, the "inclusive," tolerant abortionistas were psychologically unable to either include or tolerate them.

Did I fail to mention how inherently racist abortion is? An overwhelming 76.5 percent of aborted babies are either black or Hispanic, according to Californian Stephen Frank, a political activist and commentator. 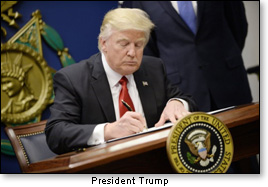 In one of his first acts, President Trump signed an Executive Order to defund the abortion mill known as Planned Parenthood. He also issued an executive memorandum reinstating the Mexico City policy, which bars federal funding for overseas groups that provide access to or counseling about abortions. And he has vowed to appoint Supreme Court justices who will overturn Roe v. Wade, the law that legalized abortion in 1973, effectively returning abortion back to the states, "and then the states will make the determination," he said.

This is what the mass hysteria was all about – the "right" to end the lives of unborn babies.

Happily, the vast majority of Americans "got" the entire meaning of the anti-life march, which included:

All this reinforced to the more than 63 million people who voted for Donald J. Trump for president that his pro-life stance was more timely and powerful than ever!

"Are so many women so shallow?" asks editor and writer Ruth S. King. "They came, they howled, they carried signs and wore stupid 'pussyhats' and they accomplished nothing, nada, zilch other than street theater."