On Christmas Eve in 2009, 60 Senate Democrats cast their final votes to approve Obamacare, which was finally voted on again by the House and enacted into law on March 23, 2010. It was only two months into Barack Obamas first term when they magically produced the exhaustively detailed, 2,300-page bill that became law. But it turns out it wasnt magic.

The leftists in Congress (Democrats all) had been working on their long-yearned-for socialized medicine for decades, just as theyve workedeven harderfor the past four years to topple candidate and then President Donald J. Trump, who has so far succeeded in overturning, reforming, even eviscerating just about everything liberals/leftists/regressives have fought for, given money to, taught their children, and voted for over the past 60 years.

What weve learned from their treachery is that Democrats always have backup plans, contingency strategies waiting in the wings, almost as if they are counting on failure. 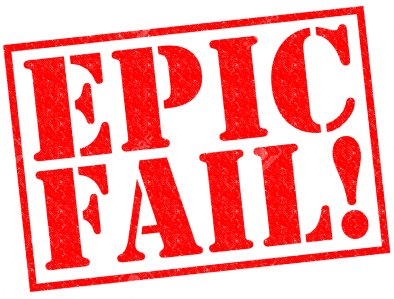 SO MANY PLANS, SO LITTLE TIME

Plan A was to utilize all the seditious and traitorous bad actors Barack Obama had put into the highest positions of Justice, State, Intelligencethe FBI, the CIA, the DNI, the DOJ, on and onin order to fabricate malicious stories about the president, wiretap his phones, enact sting operations on his advisers, and enlist the fake-news media to prove that candidate and then President Trump colluded with the Russians to win the 2016 election.

Plan B was to flood the airwavesand the countrywith the Democrats' framing of the presidents first choice as National Security Advisor, Lieutenant General Michael Flynn, by 37 (and counting) crooked Obama Officials. In May 2020, the Justice Department dropped all charges against Flynn, but a leftist federal court judge has placed the matter on hold, leading to speculation that he is hoping that a Biden Justice Department will revive it. Nevertheless.

Plan C was to enlist lawyer Michael Avenetti to claim that his client, call girl Stormy Daniels, had an affair with the president, a claim she has since denied  it never happened. Once again the anti-Trump forces relied on the craven fake-news media to lend the accusation credibility.

Plan D was to accuse the president of asking the Ukrainian president to look into the corruption of presidential candidate Joe Biden and his son Hunter when Biden was VP of the U.S., a travesty that Patricia McCarthy spells out extensively, concluding, If anyone needed to be impeached, it was virtually all of the top dogs of the Obama administration: Holder, Lynch, Rice, Power, Comey, McCabe, et al. and of course Biden as well.

Plan E was to impeach the president, supposedly for the same call to the Ukrainian president, an effort historian Victor Davis Hanson calls a coup that relied on at least 10 false premises, including phony whistleblowers whose testimony amounted to secondhand water-cooler gossip; no finding by a special counsel of any felony, collusion, or obstruction; the absence of bipartisan support; no high crimes or misdemeanors; and the chronic lying of hyper-partisan prosecutor Rep. Adam Schiff. This perversion of justice began on Jan. 16, 2020, and concluded on Feb. 5, 2020, with the presidents total acquittal.

All these crashing failures were designed to be smashing successes resulting in the removal of President Trump from office. But as Ive both said and written on many occasions, Democrats are simply not that smart.

Just as the impeachment failure was ending in February, whaddaya know? March indeed came in like a lion with the Chinese virus, aka Covid-19. And there, front and center, ostensibly helping the president through this crisis, were old-time leftists Dr. Anthony Fauci and Dr. Deborah Birx, significantly concealing their affiliations with the vaccine fetishist Bill Gates and the Clinton Foundation. Check it out here and here.

In addition to citing doomsday mortality numbers that never materialized, their prescription for flattening the curve was a virtual shutdown of America:

Quick question: Why was there not one micro-question from any media outlet about Bill Gates deep involvement with the Netflix docuseries PANDEMIC, which debuted January 22, 2020, right before the Chinese virus hit?

Plan F is what I call the mini-martial law weve experienced as a result of the coronavirus, sort of a dress rehearsal for what the deranged and depressed Democrats still had left in their Depose-Trump, Destroy-America arsenal. Suffice it to say that the attempt by the Doctors of Doom to shut down America and destroy its economy earned the following evaluation:

RUNNING OUT OF TIME

As the country began to open up and the stock market started to zoom upward, and as it became crystal clear to even the most rabid partisan that Joe Bidens cognitive impairment was worsening, Democrat desperationas evidenced by the irrational behavior and statements of their bought-and-paid-for media whoresescalated precipitously. No one who follows this circus should be surprised at what followed. 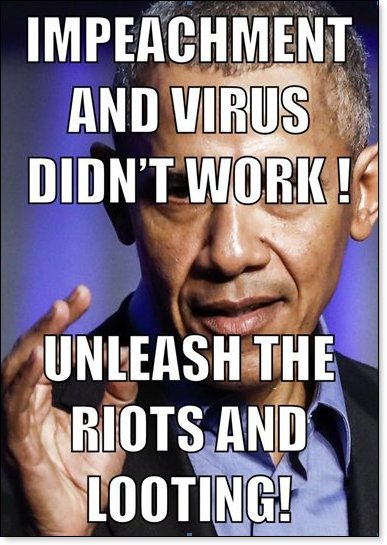 Plan G was the well-orchestrated planin the works for decadeseither to create a false-flag incident that would mobilize radical leftwing forces to wreak their typically destructive havoc, or a genuine incident that would inspire outrage and anger from the entire public and political spectrum.

That incident took place on May 25, 2020, when 46-year-old George Floyd from Minneapolis, MN, a black man accused of passing a counterfeit $20 bill, was handcuffed and thrown face down to the ground while white police officer Derek Chauvinwho has had 18 complaints against himpressed his knee to Floyds neck, cutting off circulation to his carotid artery while Floyd gasped I cant breathe and pleaded for his life. All this while two other officers helped to restrain Floyd and a fourth stopped onlookers from intervening.

The claim by Dems, of course, was that this was a direct result of the systemic racism of police departments throughout the U.S., an accusation writer Heather MacDonald thoroughly disproves. For the record, she states, based on 2019 statistics, the chance of an unarmed black being killed by police is about 1 in every 4 million. There were 10 such incidents in 2019, and as many as half of these involved attacks on police or resisting arrest.

Quick question: Where is the TIME magazine Person of the Year cover for the individual who took the iPhone video of this incident? Where is the nomination for this person to receive the Nobel Prize? Where are the non-stop lionizing interviews on TV?

What followed is the anarchy and chaos of the last several days and nights with the brazenly anti-American, anti-Semitic and racist Antifa and Black Lives Matter rampaging through American cities and suburbs, destroying businesses, stealing multimillions of dollars of goods, burning cars, defacing monuments, shooting people, throwing the Molotov cocktails and bricks left for them in strategic spots by their fellow thugs, and generally giving the world an up-close, three-dimensional picture of what clinicians call sociopaths and psychopaths. 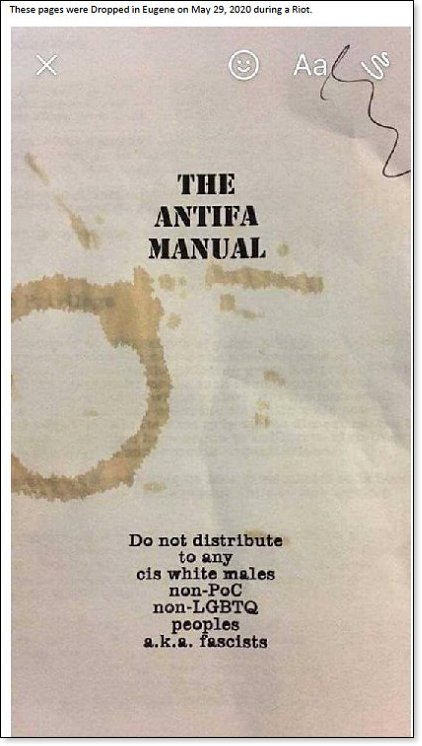 To me, the entire spectacle has the distinctly noxious whiff of Barack Obamas Organizing for Action, as spelled out by writer Scott S. Powell, who explains that The modus operandi of OFA comes right out of Obamas support and sympathy for Marxism and his background as a left-wing community organizer. Its a combination of agitation and propagandamuch like old-style Soviet agitprop, and Saul Alinskys Rules for Radicals. For Alinsky, the rules start with an ends-justifies-the-means quest for power, which can entail lawbreaking, deception, and concealing the true revolutionary agenda.

Powell quotes Paul Sperry, who presciently wrote in the New York Post: Obama has an army of agitatorsnumbering more than 30,000who will fight his Republican successor at every turn of his historic presidency. And Obama will command them from a bunker less than two miles from the White House.

His OFA Washington HQ is now the nerve center that coordinates 250 offices nationwide, Sperry continued, which together with its Chicago-based sister organization, the Community Organizing Institute (COI), are planning to facilitate the training [of] more than 2 million youths in Alinsky street tactics and carry out plans to stage 400 rallies across 42 states to attack Trump and Republicans over Obamacares repeal.

From the looks of things today, its clear that they put Obamacare aside for the bigger fish of national chaos and destruction.

It took a few days to coordinate pushback from the White House, but now it is apparent that the rampant thuggery is almost under controlexcept in the epicenter of horrific leadership, New York City and New York State. In most other places, people are exulting as more and more stores and restaurants open for business, as neighbors pitch in to repair the anarchists damage, and as the stock market continues a steady climb. Of this leftist plan, too, it can be said:

It was a good thing that the anxiety this uproar caused kept people riveted to their TVs for over a week. It meant that millions upon millions of people throughout the U.S. were actual eye-witnesses to the acting-out behavior, destructive impulses, and arrogant attitudes they teach their children never to evince or emulate.

And they all realized that every single politician supporting this thuggeryEVERY.SINGLE.ONEwas a Democrat! It was a guide to tell them who NEVER to vote for in November.

With a Republican White House, Senate, and House, President Trump will bring Americans the prosperity, jobs, infrastructure, foreign-policy pacts, and 21st century marvels of innovation they deserve! Unlike the pitiful record of chronic failure the Democrats have produced, we will once again be able to say: