Daniel Cassidy
The Obamas are not welcome at the royal wedding

December 17, 2010
Barack Hussein Obama is seen by many commentators as the most anti-British President in modern American history because he has never passed up an opportunity to offend that ally.

Within days of taking office, he returned the bust of Winston Churchill that had been loaned to the United States and placed in the Oval Office as a display of British-American solidarity in the wake of the 9/11 terrorist attacks.

When then Prime Minister Gordon Brown and his wife visited the White House, their diplomatic gifts included a pen holder carved from the HMS Gannet, a ship that had run anti-slavery missions along the coast of Africa. It was a sister ship to the Resolute, the ship whose timbers were used to make the President's desk, which was given to America by Queen Victoria. Brown also gave Obama a first edition of Sir Martin Gilbert's seven-volume biography of Sir Winston Churchill.

Obama's gift to Brown? DVD's that are unusable on European video players.

When the Obama's were invited to Buckingham Palace to meet the Queen, the Obama's official gift, on behalf of the United States, was an iPod loaded with The One's speeches. 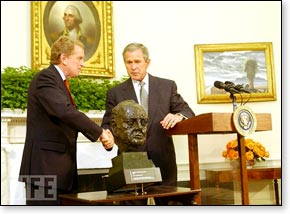 With 10,000 servicemen and women fighting alongside their American allies in Afghanistan, Britain's commitment to defeating Islamic terrorism exceeds all the other European powers combined. More than 250 British troops have given their lives. While President Bush routinely recognized the sacrifices made by British, Canadian and other allies, these sacrifices have not even been mentioned by Obama.

All of this is easily explained. America has a President who hates America and has done all that he can to undermine her. It is the reason he apologizes to our enemies and offends our allies. How could an anti-American President behave differently to an ally who has nobly and loyally supported America through all the storms of the past century?

So it was not surprising to read today, that while French President Nicolas Sarkozy and his wife Carla Bruni, among other heads of state, will be invited to the royal wedding of Prince William and Kate Middleton, the Obama's are not on the list.

We are relieved that this President, so lacking in class, will not represent America at an occasion with more than a billion people watching. Better that they should take another vacation at the American taxpayers' expense.

There is no theme more constant in English literature than its focus on civility, good manners, and the definition of a true gentleman. In his great epic poem, Idylls of the King, Lord Tennyson reflects this concern and defines the true nature of good manners when he writes:

"Manners are not idle, but the fruit. Of loyal nature and of noble mind."

In two years, the street thug and community agitator now sitting in the White House has made clear that his loyalties are not to the permanent things, to America's Constitution, and to the enduring values that unite the English-speaking peoples.

The American people exhibited good will, affirmative action, and a desire to atone for past injustice when they elected Barack Hussein Obama. That grand but misplaced gesture has now been repaid with contempt. Americans and our friends see the mistake that was made. Coping with it for the next two years will only forge a deeper, more "special" alliance between the British and American people.