August 16, 2012
The valiant Judie Brown, founder of the American Life League and America's foremost and uncompromising champion of life, has posted an open letter to His Eminence Timothy, Cardinal Dolan.

Once again, the American Episcopacy has put institutional interests ahead of what is moral and good. We have no interest in their views on the Farm Bill, trade policies or continuing budget resolutions. We do, however, expect them to speak with clarity and consistency on the great moral issues of our day. It seems Cardinal Dolan, like so many before him, would rather be a political player than a moral force for the good and true. 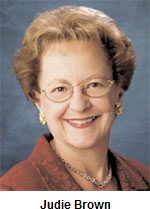 We salute Mrs. Brown for speaking forthrightly. We strongly agree with her that Cardinal Dolan's invitation sends, at best, mixed signals. In the face of Obama's assaults on the Church and her teachings, our bishops should be sharing only one message — that it is morally objectionable for any Catholic to vote for those whose policies are intrinsically evil and advance the culture of death.

During the last week, there has been much written on diocesan websites and by other bishops concerning the controversy created by your invitation to President Obama to attend the Alfred E. Smith dinner. Much of what has been written seeks to justify that invitation.

American Life League recently launched an effort to convince you to rescind that invitation. The reason for this memo is to let you know exactly why we are doing what we are doing.

First, let me point out that Cardinal Egan invited Mr. Obama to this same dinner four years ago and we did not object. Although we disagreed with Obama's basic philosophies, we felt that an attempt by the cardinal to show congeniality was worth trying.

However, it is now four years later and it is clear that whatever the cardinal hoped to accomplish at the 2008 dinner did not work. In four short years, President Obama has done everything in his power to undermine the teachings of the Catholic Church. As you know, he is implementing programs and policies that may soon make it necessary for the Church to repudiate our basic beliefs or close down all of our charitable and educational organizations.

Your Eminence, Mr. Obama has a long history with the Catholic Church. From his days as a community organizer working with Catholic churches in Chicago to his current attack on our beliefs, Obama has shown himself to be a shrewd politician with a captivating personality. How else do you explain the fact that, despite his very public support of abortion, contraception, and Planned Parenthood, he received 54 percent of the Catholic vote in 2008?

The question is NOT why you invited Mr. Obama to the dinner. The real question is why he accepted.

I submit to you that the reason he accepted is that he has nothing to lose. The Al Smith Foundation website touts that, at the 2008 dinner, Obama displayed "wit, wisdom, warmth, and wile." I am sure the author of those words thought he was being totally complimentary, but the fact is that he was very accurate. Synonyms for "wile" are, of course, "hoax," "ploy," "scam," and "deception."

I believe Mr. Obama sees the 2012 Al Smith dinner as an opportunity to, once again, use his wiles to entice the Catholics in America to "trust" him — a trust that he has betrayed time and time again.

Your Eminence, when I think of the outcome of the event — where you are seen hosting both candidates for president — I am convinced the idea that will be transmitted through the images of that dinner will be that a vote for either candidate is okay with the hierarchy.

This is precisely why American Life League launched the No Dinner for Obama campaign. We don't want Catholics to be confused about the most pro-abortion president in American history. Our duty is to be faithful and to defend moral principles, while begging our hierarchy to do the same.

We pray for you, and all members of the hierarchy, "Lead us out of temptation and toward truth, particularly today when so much is at stake."

You and the bishops of the Church have convinced us over the last several months that the future of the Catholic Church in America is hanging in the balance. We MUST oppose the contraceptive mandate and all of the other affronts the current administration is throwing at us.

Inviting the head of that administration to dinner and a night of humor and congeniality is NOT how we are going to save our Church.

Please, your Eminence, cancel the invitation or cancel the dinner. If you do neither, I am very afraid that, at this time next year, you may be forced to cancel most Church activities that take place outside the confines of your physical churches.

Asking the blessing of Your Eminence, I am,

Yours respectfully in Christ,