September 25, 2012
The latest Pew Survey showing Catholic support for President Obama speaks volumes about the regard in which America's Catholic bishops are held by America's Catholic people. After a public relations campaign opposing the Obama Administration's assaults on personal conscience and religious liberty, after a "Fortnight for Freedom," national prayer rallies, letters to the faithful and major speeches and TV interviews by American cardinals, Catholics still support the Marxist thug intent on persecuting them. 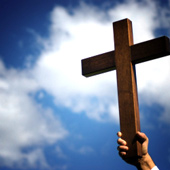 The failure of America's Catholic bishops to positively influence Catholics, much less the culture at large, is no doubt attributable to the scandals involving the sexual abuse of minors. It has been pointed out that a minuscule number of Catholic priests engaged in the sexual abuse of minors, while a majority of America's Catholic bishops were involved in covering up those crimes. If the Catholic hierarchy now wants to wield positive influence in the public square, they might start by collectively making spiritual reparation to the Sacred Heart through fasting, penance and prayer. We heard an elderly bishop from the South propose that at one of the bishops' national meetings. The motion was ruled out of order on procedural grounds. They might also shed the gold cuff links and the corporate CEO lifestyles, the vacation homes, country club memberships and the cocoons of security and separation they have built around themselves that prevent them from being real spiritual fathers to the churched and unchurched. Such changes would involve a radical transformation from being administrators of bureaucratic and real estate empires, to lives like those who have profoundly influenced the culture and changed hearts — Catholic figures like Pope John Paul II, Father Solanus Casey, Archbishop Fulton Sheen, Dorothy Day, Thomas Merton, Mother Teresa of Calcutta and the holy and indomitable Mother Angelica of EWTN.

America's bishops decided that a charming and jovial leader of their national organization would improve their image and influence. There has been talk of a national spokesperson who can pitch their message on cable news and roll with the twenty-four hour news cycle; but Madison Avenue doesn't lead to the Kingdom and will not stave off the day when serious persecution and even martyrdom will again be required of those who follow Christ. The real choice confronting America's bishops is whether they should embrace the cross now, and in so doing convert souls and build the Kingdom of God, or have the cross imposed on them in a day when nobody cares.

President Barack Obama holds a 54%-39% advantage over Mitt Romney among Catholics, according to the latest voter survey conducted by the Pew Research Center for the People & the Press.

The survey also found that white Catholics favor Obama by a 47%-46% margin.

Protestants favor Romney by a 50%-42% margin; among white evangelical Protestants, the pro-Romney advantage is 74%-19%, while the two candidates are in a 46%-46% dead heat among mainline Protestants. Black Protestants favor Obama by an overwhelming 95%-2% margin.

The Pew survey, conducted September 16, found that Obama holds a 51%-42% lead among all registered voters — a significantly larger lead than the 3.7% advantage Obama currently holds in the RealClearPolitics.com average of surveys.