August 28, 2012
"Conservative pragmatism" has brought us to a conclusion that will probably shock our readers — it would be better for Barack Hussein Obama to be reelected and face what is expected to be an enlarged conservative opposition in Congress, than for Congressional conservatives to become the pawns in the consolidation of socialist politics and the "leftist deconstruction of America's moral identity." Better that our representatives should be a minority fiercely defying what is wrong, than its docile facilitators "carrying water" for another liberal Republican administration. 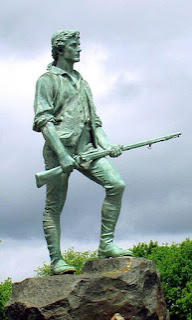 We were heartened when Governor Romney chose Paul Ryan as his running mate. He is the antithesis of Romney — bright, conservative, principled, a leader who stands resolute for core convictions. We look forward to the day when he might be a presidential candidate in his own right. In the meantime, he has become a pawn being cynically used in a decades-long process that Ambassador Alan Keyes has eloquently described below.

Conservatives in America do not have to settle, again and again, for the lesser of two evils. Like the millions gathered in 1979 to greet Pope John Paul II in Warsaw's Victory Square, let us realize that there are more of us than there are of them. An overwhelming majority of Republican primary voters voted for candidates other than Governor Romney. And yet, once again, we are saddled with a nominee who does not represent the conservative beliefs of most Republican voters and whose ever-changing views and record in government are profoundly repugnant to Christians.

It is a dark hour in America's history and we need a leader who has character and core beliefs, not a chameleon who has been on every side of every major issue.

We believe to our very core that Obama is an illegitimate President and a communist intent on destroying America, but if we are to have any hope of restoring the patrimony handed down by our founding fathers, it is time to radically change course, reject a slower route to the same destination, and refuse what has again been offered by the Republican establishment. It is America's acquiescence with evil — choosing over and over again the lesser of two evils — that has brought us to bankruptcy, moral degradation and near collapse. Stand tall, in solidarity with one another, and in the spirit of America's founders, reject the false pragmatism. The lesser of two evils is still evil.

With faith in Divine Providence, we join Alan Keyes in standing for what is good and true. We don't expect our candidate to win, but as Saint Augustine wrote, "right is right even if no one is doing it; wrong is wrong even if everyone is doing it." For the sake of our conscience, we declare our independence from a pernicious, demoralizing and corrupting system. We will proudly vote for the Constitution Party candidate, Virgil Goode.


Is Romney to lead conservatives to self-extinction?

"I know that Romney's bad. But first we get Obama out. Then we'll hold Romney's feet to the fire." That's one of the most common things I hear from self-blinkered GOP partisans hacking for the artificially engineered Romney nomination. They angrily pretend that rank and file conservatives have no choice but to obey the "eyes wide shut" command emanating from the GOP's elitist faction Party bosses.

There's a suspiciously peremptory tone to their pretense these days. As an old Star Trek fan I hear the chilly, disembodied voice of the Borg collective. "You will be given no other choice. We will add your no longer electorally distinctive ballot to our total. Resistance is futile." Truth to tell, however, if you are authentically conservative, supporting Romney is also futile; futile and self-destructive.

A leftist pretender like Romney wins office by successfully gulling a conservative constituency that would otherwise oppose the things he really means to achieve. He uses their support to build up the lie that he's one of them. Once in office he works with the leftists (in his own party and the opposition) to come up with predominantly leftist plans and proposals that implement his true goals. The false perception that he's "conservative" allows his supporters in the "conservative" party to hold any critics in its ranks in check . "We have to trust him," they say. "We have to give him the benefit of the doubt," they plead. "He'll implement this with respect for our views," they promise. And on and on.

Thanks to this strategy for governing, the duped conservatives can't hold his feet to the fire because he has no need to bed down in their camp once elected. He can set to work building a coalition that combines the left-wing tail of his own party with the left-wing body of the opposing party so as to pave the way to re-election, with or without the conservative dupes who obligingly handed him the opportunity to make them obsolete.

Thus leftist results, wearing a conservative gloss, move the government toward the greater consolidation of socialist politics. In the process the term "conservative" gets progressively (pun intended) redefined to encompass more and more of the features of socialism. What is more important, those who articulate and insist upon approaches that actually correspond to conservative principles and institutional goals (like respecting unalienable rights, preserving the natural family, encouraging morally responsible individual entrepreneurship and competitive free enterprise) are put in the false position of being unrealistic "purists" and rigid opponents of "the possible."

The GOP's nomination of Mitt Romney actually marks the culmination of more than twenty years of this stupidly self-destructive brand of "conservative" pragmatism. Whatever patter Romney uses to deceive, the actual results of his career stand well to the left of what Republicans claimed they adamantly opposed in Bill Clinton. In terms of politics, Romney represents the successful "transvaluation of values" (as Nietzsche called it). (That's the political equivalent of a sex-change operation.)

The result is, and will be, to condemn real conservatives (those loyal to America's founding principles and institutions, such as the US Constitution) to a Hobson's choice-accept the new and ever leftward redefinitions of conservatism, or else accept banishment to the outer limits of political irrelevance. The first requires the sacrifice of conscience, common sense and intellectual integrity. The second means life in a wilderness of lies, living on the remembrance of self-evident truth that is the "locusts and honey" of America's true believers.

Faced with this choice, many GOP "conservatives" of my acquaintance have in one way or another jumped on the bandwagon of self-extinction. Thank God, I am now no slave to their partisan machine. I don't feel their compulsion to suspend disbelief in order to pretend that a deed proven socialist and implementer of the leftist deconstruction of America's moral identity can ever, in any sense, be "my candidate" for President.

No more do I feel any kind of racial compulsion to support a deeply rooted communist like Obama just because his skin is a lighter shade of brown.

I find that the inevitable wrestles of youth, and the ongoing tussles of adulthood, have confirmed the moral sense that flowed through the earliest roots of my moral identity. That moral sense affirms that my goodwill is not bound to correspond to any material attribute or passion, but only to the insistent inclination that draws the mind and heart toward truth, the way a compass needle seeks the northern pole.

On both sides of the sham election currently being staged, truth is the uninvited guest. The racial partisans say I should not tell the truth about Obama's allegiance to the cult of death: his advocacy of child murder; his suppression of the family's call to procreation; his abandonment of God's precious gift of freedom in order to enslave humankind to the outcomes of "history," however inconsiderate, vile and inhumane.

The GOP partisans say that I should not tell the truth about Mitt Romney's worship of ambition and financial gain, which led him, too, to sacrifice conscience and unalienable right in order to feed the depraved appetites of those he thought necessary to his advancement. I should not tell the truth about his deed conflicted stands; his careless health care packages tainted with the blood of murdered innocence; his socialist "bipartisan" schemes tainted by the sacrifice of conscientious liberty.

But ringing true in my ears is the word that drowns out all they say. "For what will it profit a man if he gains the whole world and forfeits his own soul?" (Matthew 16:25) And before my eyes is the example of the one who said "For this was I born; and for this purpose I have come into the world, to bear witness to the truth..." (John 18:37). In my youth I was inspired by the painful history of my forbears to read and give much study to the effort to understand what it takes to found and safeguard human liberty. And here, in what may be its gathering twilight, Christ's word and his example epitomize the best fruit of that effort.

If tomorrow all the self-professed conservatives I have known and worked with in my life could break free from the mesmerizing light of false pragmatism and walk only by the light of that word and example, they would see their own strength. Awakening from their redeemer bereft nightmare world of "lesser evils," they would shun the tawdry compromise that now steals their strength away. "But that would take a miracle," you say. So be it.