June 22, 2011
Sunlit Uplands readers know that we bow to no one in our utter contempt for the Marxist who is deliberately dividing and undermining this country from the Oval Office in the White House. Yet we are also the first to acknowledge that no one bears more responsibility for the election of Barack Hussein Obama than George W. Bush. We were, therefore, sorry to read this morning that his close friend and political protege, Texas Governor Rick Perry, has added South Carolina to his summer travel plans — his first trip to an early presidential primary nominating state. 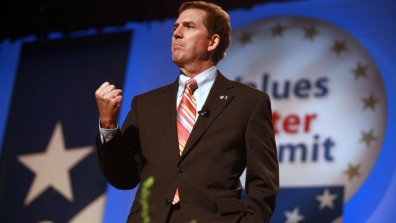 South Carolinians have been tricked before by conservative rhetoric that masks big government, big spending, liberal policies and hordes of Rockefeller, Giuliani, Romney-style appointees to impose them. Indeed, George W. Bush never met a problem that $20 billion couldn't solve. South Carolinians believe that problems are best solved locally, by caring individuals, churches, and civic organizations, where true charity is the reflex of prayer. Many here give 10% of their income to support their church and its social outreach. Could there be another state with more churches per capita than South Carolina?

Governor Perry talks about the private sector doing the job government does so poorly. Indeed, he has learned that in the new media, bombast and tough talk in a viral video can cover a thousand sins. But when the talk ends, where does the governor put his money? Not in his church. ABC News reports:

The Perry family's income tax return shows Perry gave $90 to his church in 2007, a year in which he reported an income of more than $1 million, the San Antonio Express-News reported in Sunday's edition. Tax records from 2000, when Perry became governor, through 2009 show he earned $2.68 million and gave $14,243 to churches and religious organizations, about a half percent, the newspaper reported.

Perry reported no religious contributions in 2000 and 2009, according to his tax records.

Americans averaged giving nearly 1.2 percent of their income to churches and religious groups in 2004-08, according to the Illinois-based research firm Empty Tomb Inc., which tracks church-giving trends.

Does America need another liar and pretender in the White House?

South Carolinians should not expect that the very political circle that brought America into crisis will now rescue us. Indeed, we need not look very far afield at all for a quiet, prayerful, principled conservative to lead America in these dark days. Among our own is a leader who talks the talk, but also walks the walk. That's why we strongly support Jim DeMint for President.