Daniel Cassidy
Gary Glenn for US Senator from Michigan

November 29, 2011
In every Congressional election cycle, a few key races become the focus of national attention because of the power of the personalities involved, the contrast in policy positions, or because of what is at stake in the control of the House or Senate. I am convinced that Michigan is going to be a critical battleground next year for those reasons and more. 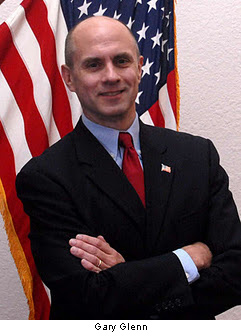 In the Michigan Republican primary for the nomination to challenge Senator Debbie Stabenow, Gary Glenn is facing a former Republican Congressman who supported TARP, the Brady Gun Control Bill, opposes Right to Work legislation and has the strong support of Teamsters boss Jimmy Hoffa. The other Republican establishment retreads challenging Gary are not much better.

Stabenow is considered the most vulnerable Democrat Senator running in 2012, and her defeat or reelection could determine which party controls the Senate in the years ahead.

I have been privileged to know Gary for the past 14 years. He is an extraordinarily good and gifted leader with a spark of greatness our country desperately needs right now. In his twenties, Gary led the successful statewide initiative that made Idaho a Right to Work state. No less than Charlton Heston was so impressed with Gary's leadership of that effort, he agreed to make TV spots for the campaign and was a friend and supporter of Gary for the rest of his life. Gary also led a School Choice ballot initiative campaign in Michigan and for the past 13 years has transformed the state affiliate of the American Family Association into one of the most formidable advocacy groups in that state. Gary and the American Family Association of Michigan have faced down the American Library Association and ensured Internet filtering in libraries; they have taken on major hotel chains over in-room pornography and won; and they have been a bulwark against efforts to impose the radical homosexual agenda through city ordinances and in the state legislature. Gary is also a founding member of the Michigan Freedom to Work Coalition, which is pushing for passage of a Right to Work law in that state. Incredibly, support for Right to Work is booming in the very home of forced, big unionism.

In several debates involving all the Republican candidates, Gary has won by wide margins the straw polls that followed. The TEA Party movement in Michigan has agreed to unite behind a single candidate in this race, and Lord willing, Gary will be the TEA Party candidate.

Gary's enormous political skills are exceeded only by his profound love for his country and a deep Christian faith that anchors and permeates all that he does.

This race, Gary's campaign to repair the damage that has been done to this country and restore American greatness is not merely a Michigan matter. It has implications for every American. For that reason, I am writing to ask that you please give whatever you can to ensure that a true Right to Life, Reagan conservative replaces Debbie Stabenow in the United States Senate. Campaign contributions before the end of this quarter are especially needed and helpful and can be made at Gary's website. I am confident that the more you know about this good patriot and freedom fighter, the more you will want to help.

I could not recommend anyone more highly than Gary. Please join this effort "to restore the greatness of our republic." Thanks for anything you can do to help.