March 24, 2012
We just left a message for Senator Jim DeMint at his Washington Office (202-224-6121) expressing our bitter disappointment that he has joined establishment party figures in supporting Mitt Romney and urging Senator Santorum to get out of the race. It is not the first time that DeMint has favored Governor Romney; he endorsed him in 2008. 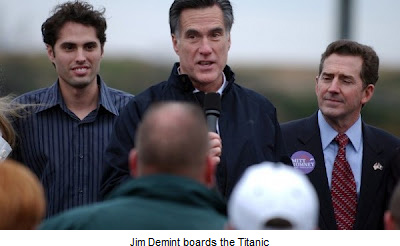 The establishment chorus knows that Senator Santorum is likely to win the Louisiana Primary. Indeed, the establishment would not be rallying if they didn't believe their regional candidate is likely to crawl, weak and bleeding, to the finish line, if he can make it at all. In every state, save perhaps his own, the majority of primary voters supported a candidate other than Governor Romney. According to a study done by The Daily Beast, the former Massachusetts Governor has "the worst primary-season favorable-unfavorable split of any major-party nominee of the last 36 years [at least]."

His candidacy will be disastrous and GOP rank-and-file voters should hold John McCain, the Bush family, Lindsay Graham, Nikki Haley and yes, even Senator Jim DeMint responsible for the debacle that is about to unfold in the Republican Party.

The best thing that could happen would be for the convention to draft a candidate with broad, national support, who can truly unite the GOP against the worst, most unpopular president in American history — not nominate an echo who at one time or another has espoused Obama's policies.

We grudgingly went along with the establishment's argument that we should hold our nose and vote for McCain, Bush, Dole, etc. — because the alternative was so much worse. Let the record show that we will not do that again. The lesser of two evils is still evil, and we would rather have bad policy associated with the Democrat brand than to compromise the Republican brand any further.

Here in South Carolina the only demographic supporting Governor Romney in the South Carolina Primary were those making more than $200,000 per year. We hope that when the worst fears of concerned Republicans are realized on November 6, that elected leaders here — Governor Haley, Treasurer Loftis, Senators Graham and DeMint — and the high priests of the GOP Establishment throughout America who are foisting this very flawed and noxious candidate on us — will stand up and take full responsibility.