November 3, 2009
Apparently, after realizing that 40 years of televised liberal propaganda hadn't 'taken' as completely as they thought it had, the Propaganda Network (ABC, CBS, NBC, CNN and MSNBC) is backpedaling like crazy away from their beloved 'savior,' whom they refer to openly as "The One." Only weeks ago planted firmly on their knees in front of Barack Hussein Obama as they worshipped everything he said and did for the past 18 months, Obama's handlers have obviously given the mainstream news media the nod to start pretending to be journalists again. 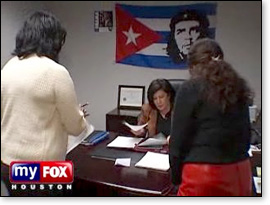 As the NY Times and CNN both begin publishing opinions which are mildly critical of The Obama Show, the rest of Obama's propaganda machine falls in line as well. The entire Propaganda Network (PN) is in reverse in America today. The White House now feigning anger with some of their most faithful and beloved partners (NYT and CNN), it appears that the $660 million dollar marketing campaign which convinced an America disillusioned by faux-Republican George Bush to vote for a secret candidate (no school records, no birth certificate, no passport records) was only effective while the propaganda was actually on the air promoting our Mystery President. Since the year-long onslaught of media-driven promotion of The Obama Show, ratings have dropped considerably as guest star after guest star (Obama administration appointed 'Czars') have turned out to be virtually all Communists, criminals and more Communists.

While the national unemployment rate has continued to rise above 10%, The Obama Show claims to have created more than 600,000 jobs! Apparently realizing that this is only a show like any other show, America seems to have become collectively aware that we've been duped, that the Mystery President which followers still call "The One" hasn't got any "change" to offer except for Communism (technically one could make the case that this is 'old change') and in less than a year has virtually destroyed all "hope" that this "change" is right for America. As the media pretends to be journalists once more, an educated and experienced America looks on in amazement, that The Obama Show would even have the audacity to take us for such suckers...again.

OIL SPILL IN SF BAY: LIBERALS FREAKING OUT ABOUT BIRDS  While California liberals put their sad faces on display in local newscasts for 35 birds covered with oil from a recent tanker spill, more than 4,000 babies were killed in America by abortion doctors again today. The description of American Liberals of "upside down" appears to be accurate as the ultra-left cries tears for 35 oil-covered birds who need cleaning and yet applaud, congratulate and support the mothers who chose to hire doctors and our nation's largest abortion provider Planned Parenthood (an oxymoron if I ever heard one) to kill more than 4,000 of their babies every single day, celebrating their 'freedom' to kill their own children before birth. "At the rescue center, the birds are checked for injuries, photographed, fed and kept warm. Within 48 hours most are healthy enough to have the oil cleaned from their bodies and feathers."

Let's think: Crying for oil-covered birds  celebrating dead babies. Priorities, morals and ethics clearly completely upside down, American liberals care more about their imaginary crises such as the global warming hoax and the more recent Healthcare crisis d'jour which is really just our government strong-arming and taking over the healthcare industry than they care for real, Human babies. Perhaps the liberal left is better able to sit in trees and march along gleefully in profane public sex parades in San Francisco than they are able to discern right and wrong or up from down in America today. For my money, I'll take leaders who tread the middle ground, thank you very much.

IMPEACH OBAMA MOVEMENT GROWING  A national movement is taking place right now after the US government under the direction and authority of The Obama Show has veered hard left into Communism, taking over the auto industry, the banking industry and is pounding on the door of the Health Insurance industry with plans to take over both health insurance and health care in the United States. Websites such as www.impeachobamacampaign.com (more than 70,000 signatures at this one site alone, as of yesterday) are reporting that thousands and thousands of Americans are signing petitions to impeach "The One." This, coming less than 10 months into his reign, I believe is unprecedented in US history.

A recent Google search using the words "impeach Obama" produced 970,000 links which seems to confirm that America has awoken from her propaganda-induced delusion and is aware that our nation has been taken over by extremists. The Obama Show worked really well on paper, and even during promotion it sold very nicely to Americans who had been effectively uneducated by the US government school system and subject to 40 years of media-driven propaganda in schools, on television and in movies. Clearly The Obama Show and its creators and handlers did their homework before launching this new venture, as more than $660,000,000 worth of advertising certainly did glean them many fans initially. As the dream turned into a nightmare, however, and the effects of more than 660 million dollars of propaganda (primetime television and magazine ads) began to wear off, Americans woke up to the fact that the good old USA was being quickly converted to Communism (Socialism, Marxism, Communism  effectively all the same thing) as our government pulled the same routine that many Communists have pulled throughout history.

Rahm Emanuel said it succinctly when he said 'You never want a serious crisis to go to waste' and the ultra-leftists (Communists) who control the Democrat Party proceeded to take advantage of our financial crisis, which some believe was initiated intentionally by the Federal Reserve Board who controls our money and who has been accused of associating with the global One World Government conspirators. Adolph Hitler did the same thing: trashed the economy so people were afraid and felt needy, then stepped in, flooded the nation with propaganda and pretended to be their savior...and it worked, just like it worked here in America last year. The difference, of course, is that Hitler duped folks in ultra-liberal Europe. The Obama Show has pulled off the same mass manipulation in the Land of the Free, filled with God-fearing, God-loving, conservative Americans. The Communists really need to get credit for a job well done, because America was truly the biggest and hardest nut to crack, and they definitely cracked her wide open last November.

But today is another day altogether. Americans have awakened and are sounding the alarm for the others to wake up. There is a rooster in the hen house and before The Obama Show gives America over to the rest of the Communists involved in trying to create a One World government next month in Copenhagen, Americans are now beating on the White House door, demanding that this ultra-liberal leftist Communist president and his friends get the Hell out of Washington D.C.

NANCY PELOSI NEWEST CIRCUS STAR  Nancy Pelosi, Democrat from California (strike two) has recently submitted a new bill designed to replace the old bill, both of which will allow the US government to take over the health insurance industry and healthcare in the entire USA. Ms. Pelosi's bill, however, is nearly 2,000 pages long, replacing The Obama Show's original 1,000 page Communist healthcare takeover attempt. With so much pork in this bill, it's designed not only to take over health insurance and healthcare industries in America, but to insure that attorneys and special interests get special rights and treatment. From biggovernment.com: "For example, check out this juicy morsel to the trial lawyers (page 1431-1433 of the bill): Section 2531, entitled "Medical Liability Alternatives," establishes an incentive program for states to adopt and implement alternatives to medical liability litigation. [But]...... a state is not eligible for the incentive payments if that state puts a law on the books that limits attorneys' fees or imposes caps on damages.

So Pelosi's new offering must be considered a joke and that would make her Washington D.C.'s newest circus star! But wait...no one's laughing. Quite the contrary, in fact, a lot of people are mad as Hell. Rightly so, in my humble opinion. It's high time we chased this circus out of town for good. While I agree that America should be able to support a national healthcare system, to provide healthcare for every American citizen, there is currently such a lack of accountability in spending in Washington D.C. that only a complete house-cleaning  which means eliminating all incumbents and electing men and women of character and integrity to both the House and the Senate  will right this financially lilting ship.

WHY CURRENT GOVT. LEADERS CAN'T BE TRUSTED WITH YOUR TAX DOLLARS  The Department of Energy, as just one example, created under Democrat Jimmy Carter's regime, is currently requesting a $26.4 BILLION DOLLAR budget drain on the US taxpayers for 2010. Does anyone remember why this department was originally created? Get this: to overcome America's dependence on foreign oil! Has it succeeded in it's mission? No! It has been a complete and utter failure! Yet the DOE has over 150,000 people on it's payroll today, a complete failure of Carter's presidency, yet still in existence today!

Is pouring 26.4 BILLION DOLLARS every year into a FAILED EFFORT really wise stewardship of American taxpayer money? Of course not. Why hasn't someone done something about this, and other wasteful spending by both Democrats and the GOP?!? Because there is no accountability in Washington D.C today! That's why.