Marielena Montesino de Stuart
Is America fading into the distance? 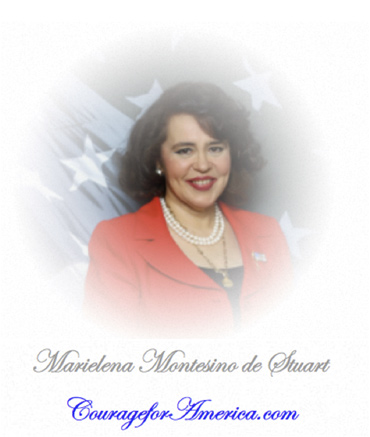 During my campaign for the U.S. Senate I spoke about the imminent danger of tyrannical policies that would continue to emerge from the desks of socialist politicians — at every level of government. I also described how, as a consequence of this socialist environment, America could turn into a nation we would one day no longer recognize.

City, county and state governments continue to embrace the socialist United Nations global action plan of Sustainable Development (known as the Agenda for the 21st Century/Agenda 21) which aims to control and make every aspect of our lives "sustainable" — through programs that undermine the traditional family, the private sector and our sovereignty. In addition, Sustainable Development promotes restrictions on population growth, food consumption, land usage and property rights — while allocating taxpayer money for chosen "sustainable" projects and partners. This will lead to a totalitarianism that will advance across America. One such example is California's Governor, Jerry Brown, and his ruthless reaction towards those that oppose his solar "sustainable" projects:

In an article titled Solar power plants burden the counties that host them (Nov.25, 2012) the Los Angeles Times reports:

"Gov. Jerry Brown has vowed to "crush" opponents of solar projects. At the launch of a solar farm near Sacramento, the governor pledged: "It's not easy. There are gonna be screw-ups. There are gonna be bankruptcies. There'll be indictments and there'll be deaths. But we're gonna keep going — and nothing's gonna stop me."

Due to its massive scope, Sustainable Development (Agenda 21) is pervasive and persistent at every level of our society, including regional planning committees, where it has a powerful presence. Sustainable Development finds enthusiastic support in the corporate world, through Public-Private Partnerships (PPPs) and programs granting obscene access to taxpayer funds — under the pretext of environmental stewardship and "sustainability." Many (if not all) of these taxpayer funded corporate 'fellow travelers' who have entered into Public-Private Partnerships will soon find the government choking their "partnerships" — as more socialist policies are enacted.

As with any socialist initiative, most of the decisions made under Sustainable Development programs are reached through "consensus" amongst an elite few who enjoy their close proximity to politicians in Washington DC and other government bureaucrats — with little or no regard for public opinion or participation. These politicians and corporate 'fellow travelers' assume that they know what is best for our future, when it comes to planning and licensing large-scale projects. Much of their activity is veiled, until it is absolutely necessary to present it to the general public. By then — it is too late, as new policies, redevelopment and rezoning transform the landscape — as well as the lives of millions of citizens across our nation.

The term "sustainable development" gained much popularity through the vigorous activities of the World Commission on Environment and Development (Brundtland Commission) headed by Gro Harlem Brundtland, who has served as Vice-President of the Socialist International and Prime-Minister of Norway; however, the seeds of "sustainability" go way back to activist circles dedicated to transforming the world under a new set of economic, environmental, and social guidelines — including, but not limited to, The Convention on Wetlands (February 2, 1971) held in the city of Ramsar, Iran — on the shores of the Caspian Sea.

The term "sustainable development" was officially presented as a United Nations policy in 1992 — and designated as the Agenda for the 21st Century. President George H.W. Bush was among the 108 world leaders present at the 1992 Rio de Janeiro conference, where Agenda 21 was adopted as official policy at a signing ceremony.

The socialist hostility towards sovereignty and equal protection under the rule of law is palpable in America. In addition, the panorama presented above would be incomplete if we fail to take note of the misguided decision by the Republican governors of Florida, Texas and Wisconsin, who recently rolled out the red carpet for Communist Chinese investors — with the help of George W. Bush. Wining, dining, wooing and entering into business partnerships with Communists on our own American soil is indeed, the growing trend.

We must insist on educating everyone — from the very young to the very old, on the evil presence of socialism and materialistic atheism in our society. There will be stops along the way — where clashes will occur with the overgrowth of destructive ideologies that have taken over our nation — but our courage and determination will help us overcome any fears of the uncertain. We must not sit idly and wait for the enemies of God to deal a mortal blow to our nation.

The last train to save America has not left the station yet. We must not allow America to fade into the distance — and I insist that as conservatives we must not be pressed into the farthest corner. We have the power to benefit society, as we ought — by teaching that the basis for all public policies should not rest on ambiguous catch phrases or socialist ideology, but rather on the Commandments of God and on the Natural Law — which binds all men, for all times and in all circumstances.

I have boarded the last train to save America. Have you?