Marielena Montesino de Stuart
There is anxiety in Ankara 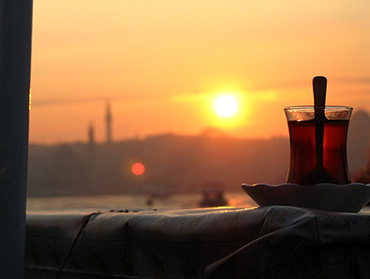 The Turks are working their worry beads...

There is a reason Turkey is very nervous these days, particularly when it comes to Crimea.

When Turks think of Crimea they think of the Crimean Khanate, a Turkish-Mongol basal state under the Ottoman Empire, until 1783 – when Catherine the Great annexed the region.

As such, it was in Crimea that the Turkish people saw their powerful Ottoman Empire subjected to a major defeat, at the hands of the Russians.

Nothing was ever the same for the Turks – and now history is repeating itself with Russia's annexation of Crimea under Vladimir Putin. 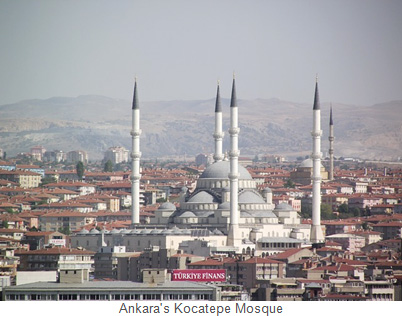 By the late nineteenth century, the Ottoman Empire had been overwhelmed by Russia – in the Black Sea, the Caucasus and the Balkans. The only hope the Turks had left was to kindle Moslem Tatar unrest in Crimea.

In addition to the Russian Empire, Ukraine and its Crimean peninsula have been under the domination of various powers, including the Grand Duchy of Lithuania, the Austro-Hungarian Empire, Poland – as well as under the boot of the former Soviet Union. This is why this region is considered Europe's main theater of war.

Crimea is a symbol of victory for Russia. But Turks never forgot the power and influence they once held over the area; consequently, the Ottoman Empire entered World War I by attacking Crimea's harbor in Sevastopol and destroying Russia's ability to command the Black Sea during WWI.

The Marxist takeover of Russia thwarted Turkey's plans – eventually leading to a cooperation between Moscow and Ankara, known as the Treaty of Moscow (1921) – a classic case of "if you can't beat them, join them." By the time World War II broke out, Turkey had grown used to a "dialogue" of sorts with Moscow – and assumed a position of neutrality.

Ankara, however, felt Moscow's threat to Turkish sovereignty more and more with Joseph Stalin in the picture. Stalin's insistence that Soviet ships pass through the Bosporus strait was a scary situation for the Turks. This pressure from the Soviets escalated – leaving Turkey with no option but to "take sides" by joining NATO in 1952.

The above historical trajectory has magnified Turkey's sometimes advantageous, sometimes vulnerable geographical position at the edge of Europe – which now has Ankara welcoming European sustainable development (socialist) economic deals, while asserting its Moslem side.

This duality was evident during the visit to Turkey by the Grand Duke Henri of Luxembourg, and Luxembourg's Cuban-born Grand Duchess, María Teresa, in November 2013.


View Getty image of the Grand Duke and the Grand Duchess of Luxembourg during their visit to Turkey HERE.


With the annexation of Crimea, Turkey faces Russian expansion in the region – reminiscent of Catherine the Great. But Vladimir Putin's "victory" of annexing Crimea is not due to being a "great" leader; instead, it is due to the military and economic weakness of his neighbors – and his desire to recover the former Soviet Union's territories.

Putin is an old KGB thug – but he is no fool. He knows that he also needs to win over the Moslem population in Ukraine, including the Tatars, in order to strengthen the Russian sphere of influence in the region's Moslem communities.

Putin and the Tatars in Crimea 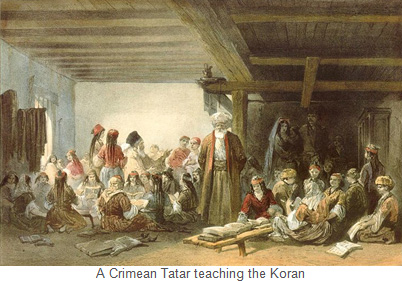 Putin has assumed that the Crimean Tatars' Moslem blood will run thicker on the Russian side, than in the waters of their Sunni Turkic origin.

But he is wrong.

Crimean Tatars, who in current times are comprised of Sufis, Taqfirs, Salafis, Jihadis, etc., are less than enthusiastic about living under Russian rule, considering that their history vividly recounts the loss of the Crimean Khanate to Russia. In fact, many Crimean Tatars boycotted the Crimean Referendum – and the leader of the Crimean Tatars' assembly, Refat Chubarov, has called for a national and autonomous region for Tatars in Crimea.

Furthermore, the memory of being deported by the Soviets in cattle wagons – and dying by the thousands in the process – is still fresh in their minds.

Tatars have been a loud voice against the Russian annexation of Crimea, except for some small groups that feel abandoned by the Ukrainian government in Kiev.

The annexation of Crimea – with its long history of religious ethnic minorities and struggles – is like purchasing an old car: it will require a lot of maintenance. But for Putin, this effort is well worth it – taking into consideration the strategic advantage Russia enjoys by controlling the Crimean peninsula, which includes a prominent presence in the Black Sea and the Mediterranean Basin.

This is why Putin was joined by the two highest-ranking Moslem leaders in Russia, during the Crimean annexation ceremony in the Kremlin: Mufti Sheikh-ul-Islam Talgat Tadzhuddin, Chairman of the Central Clerical Administration of Moslems of Russia Supreme, and Sheikh Ravil Gainutdin, the Chairman of the Council of Muftis of Russia. The evidence of their presence during the annexation ceremony was critically important to Putin, as he gains new territory and appeases Tatar Moslem communities – while presenting a farcical Christian front to the rest of the world.

What about the Kremlin conformist, the Russian Orthodox Patriarch Kirill?

Kirill was absent during the Crimea annexation ceremony.

Could it be that Kirill is concerned that the Russian chaos in Ukraine could ruin Russia's Orthodox plans to be seen as the leader of world Orthodoxy? – an honorary primacy traditionally held by the Patriarch of Constantinople.

If this is the case, numbers will play a big role in Ukraine, where Orthodoxy is deeply divided. There is also unrest amongst Orthodox Church members who until now were loyal to Moscow – but are now turning towards Kiev. In addition, there are reports of violence against Catholic and Ukrainian clergy in Crimea.

So far, it looks like Kirill's friend, Vladimir Putin, is ruining the farcical Christian program at the Kremlin, which Kirill has been supporting.

We will have to wait and see how Patriarch Kirill will proceed, in anticipation of the pan-Orthodox council that will convene in 2016 – considered to be their largest and most significant event since 787 AD.

This pan-religious council has the goal of unifying Orthodox Christians in their approach to modern times.

Watch the Kremlin take over this council and control the show.

You see, the Kremlin has controlled the Russian Orthodox Church – from the Soviet period to the present time.

This is another example of why I stress to my readers that Russia, under Vladimir Putin's control, must not be trusted from a Christian standpoint – no matter how tempting it is – during these dark times when Christians are being persecuted and are desperately looking for someone in a position of leadership to say the right words.

As far as Catholics are concerned, Russia will continue on this murky path until it is duly consecrated, pursuant to the request of the Virgin Mary at Fatima.

Meanwhile, there is not much the Turks can do about Russia's annexation of Crimea – since the Turkish economy is highly dependent on importing Russian energy products. More than half of Turkey's natural gas needs are met by Russia – and Russia is Turkey's number-one trading partner.

There have been reports that the Prime Minister of Turkey, Recep Tayyip Erdoðan, has issued threats to close the Bosporus to Russian ships – if the Crimean Tatars are threatened. We will be shocked if he follows through with his threat, given Turkey's economic dependency on Russia.

Ankara stands to be punished if it crosses Moscow – just as when the Russians set up the Kurdistan Workers Party (PKK) – which carried out terror attacks against Turkey for several decades. The PKK became active in Lebanon's Bekaa Valley under Syrian occupation, during the 1980's. The PKK continued to receive the tacit support of the Kremlin, even after the Soviet Union "dissolved."

Turkey entered into peace talks with the PKK – but remains alert to the fact that hardline PKK members are not to be trusted.

Turkey's dislike of Assad's regime in Syria does not sit well with Moscow – and Turkey's support of Syria's opposition forces has not gone unnoticed in the Kremlin. If the Turks intervene in Syria, the PKK will most likely take up arms against Turkey once again.

It is patently clear that Turkey will not mess with Russia.

This difficult relationship between Moslems and Russians evidently goes back hundreds of years – and Moslems in the region have learned to survive with this tension. This is why Moslem communities have a history of benefitting from their participation in trade networks created through Russian expansion.

Crimean Tatars do not identify fully with the Islamic approach of the Russian mullahs who frequent the Kremlin; nevertheless, the Tatars in Crimea, like their Moslem counterparts in Russia, are accustomed to an imperfect, albeit pragmatic and economically viable modus operandi with their Russian rulers.

The inculcation of an Islamic system that embraces socialism has also anchored Moslem communities in the region for a very long time. Moslem leaders in Russia take advantage of this environment by essentially claiming that Russian expansionism acts as a "protection" against the more radical Saudi-style Islamic presence. This will only work with those who do not identify with global jihad – and there is support for global jihad in Crimea.


Click HERE to view Getty image of Crimean annexation ceremony at the Kremlin.


With all this in mind, Vladimir Putin is going out of his way to appease the Tatars in Crimea – even offering to make Crimean Tatar an official language, alongside Ukrainian and Russian. Crimean Tatar is a member of the Kypchak branch of Turkic languages.

Given the above scenario, Putin has no choice but to practice delicate diplomacy with Moslems – as part of his determination to maintain a close relationship with Moslem states that identify with Putin's position against Washington – such as Syria, Iran and others.

Washington, on the other hand, lacks the leadership to do anything about Putin's aggressive territorial expansion project. And at the end of the day, Putin and Obama have something in common: they are both expanding their socialist agenda. One under the disguise of Christianity – and the other in the name of "social justice."

Tragically, while Putin is recreating the former Soviet Union, the European Union – which is also highly dependent on Russian energy products – has little to offer, other than socialism and austerity programs.

No wonder there is anxiety in Ankara – as well as in the entire Balkans-Caucasus region.

"Ukraine in the Key of G"