Marielena Montesino de Stuart
For more than 50 years Catholics have believed this bull...

May 10, 2013
Bull or papal bull: A solemn proclamation issued by the Pope, in written form.

On December 25, 1961 John XXIII decided to play an impractical joke by issuing a bull announcing the Second Vatican Council (Vatican II) – where the Catholic Church left her traditions behind, let her hair down and modernized! 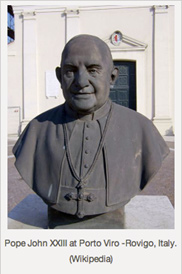 A little freshening up... if you will.

L'Osservatore Romano, the Pope's official newspaper, relived this unfortunate decision in the May 5, 2013 edition, by retracing the steps that led to this bull.

An entire generation of Catholic hippies, lovers of relativism, homosexuals, "intellectuals," Communists, believers in the "Church-of-What's-Happening-Now," disordered architects of modernist churches, materialistic opportunists – and even innocent well-meaning Catholics, have believed this bull, known as HUMANAE SALUTIS, the Bull of Indiction of the Second Vatican Ecumenical Council.

Pay for your own guillotine

John XXIII's bull was dug out of the Vatican's Secret Archives (even though his bull was no secret). The Secret Archives comprise 84 linear kilometers of documents. The original Humanae Salutis, now unveiled, is available for the world to see (with limited access) at Scrinium.

But you will not have the right to peruse the original bull – unless you pay. So this means that the bull which helped place a yoke on Catholics for more than 50 years, can now be examined at a price.

This is like asking you to pay for your own guillotine.

This modernist type of bull was considered complete – only after careful attention was paid, not just to "internal ecclesial implications and the relationship with the Roman Curia" – but also to "terms that would not bruise the sensitivity of atheists" (especially Communists) non-believers and others, as suggested by John XXIII's personal secretary, Mgr. Loris Capovilla, through pencil corrections.

As such, the socialist erudites and periti who worked with John XXIII labored to put together a document worded in the most exquisite style of political correctness. The analysts who have been involved in the recent unveiling, carefully mentioned this. Now they tell us!

After more than 50 years, John XXIII's exquisite political correctness has turned into a train wreck known as Vatican II – with pederasts, cowards, liars and thieves running amok down the halls of the Roman Curia and on sacred Church grounds around the world.

Religious communities that would not go along with this modernist program, eventually disappeared. New religious communities with conservative rules did emerge – but they always have to keep that "delicate balance" involved when following marching orders from Vatican II bureaucrats.

Others, like the contemplative Cistercian nuns at the Abbey of Marienkron in Austria, have joined the Vatican II modernist circus – and turned their chicken farm into a massage parlor, where they now contemplate half-naked men and women who pay for massages, Tibetan meditation and other exotic relaxation practices. Hurry, make your reservations today: http://www.marienkron.at/index.cfm?seite=startseite 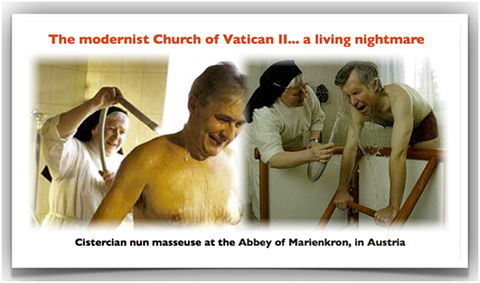 Another Catholic who has taken John XXIII's bull very seriously, is the "Dancing Jesuit." If dancing is your thing, then you can learn some great moves from this priest – in a special video commissioned by Jesuit Mission Switzerland.

I'm sure that this talented dancing Jesuit can be booked for an enlightening experience during a Catholic Cruise – where faith, reason and the Catechism are poured into the brains of trusting Catholics, between canapés and glasses of beer.

The producer of the following video is Father Christof Wolf, SJ, a professor at the Munich School of Philosophy: 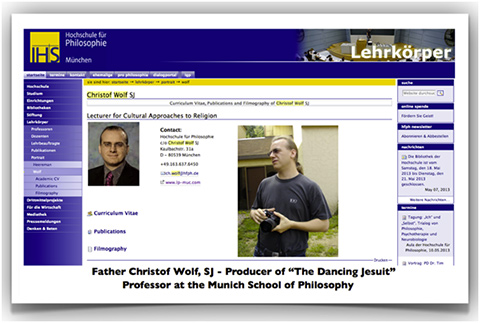 You are off the hook!

I am confident that the next generation of lay Catholics will not believe John XXIII's bull – not just because they see the chaos of Vatican II – but also because according to this report, someone added the words "the lay members of Christ's faithful people" in the copy that appeared in L'Osservatore Romano – even though these words are nowhere to be found in the original bull.

Here is part of the justification provided by L'Osservatore Romano, in their special edition of May 5:

TRANSLATION INTO ENGLISH, COURTESY OF MARIELENA MONTESINO DE STUART: "The bull was published in the Latin version in «L'Osservatore Romano» on December 26-27, 1961, evidently (as required by the practice) according to a text transmitted to the newspaper by the Secretariat of State; this text, however, had very slight variations with respect to versions A and B, therefore also to the original bull..."

Analysts are now putting the blame on Arrigo Bravi, who at the time worked as a calligrapher and miniaturist, as well as for the Secretariat of Briefs to Princes. The truth is that no one knows how many people edited this bull – and their intentions will continue to be questioned.

The news regarding the exclusion of lay Catholics has arrived a bit late for those who have been obediently sitting inside this train wreck of Vatican II for 50 years; nevertheless, it should be cause for celebration – now that they are off the hook and no longer have to be subjected to this bull.♔